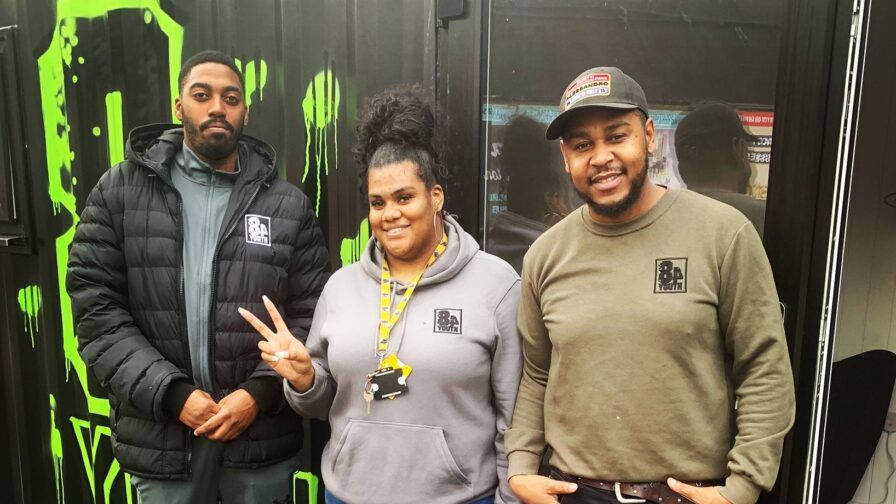 The murder of young men in Moss Side and the imprisonment of many under joint enterprise laws has left a community traumatised. 84Youth are addressing that trauma and challenging damaging narratives perpetuating youth violence.

Those were the words spoken to Akemia Minott that changed the course of her life.  On 12 May 2016 Abdul Hafidah was attacked with a knife, hammer and hit by a car. Video evidence showed that a group of teenagers chased Hafidah across Manchester’s Princess Parkway in rush hour traffic. Although witnesses saw only two men attacking Hafidah at the time of the fatal stabbing, under controversial joint enterprise laws, where an individual can be jointly convicted of the crime of another, seven teenagers were convicted of murder and four of manslaughter. Akemia was the first person that these teenagers turned to for advice.

In the sixty minutes I spent with Akemia Minott I learnt more about what is happening in society than I ever have from a press conference, news report or documentary. She spoke of the reasons why she set up 84Youth, an organisation which aims to tackle the problem of youth violence and the damaging “gang narrative” that stereotypes and stigmatises inner city youth.

Already an established youth worker, Akemia had been working in the community for years when tragedy struck Moss Side in 2016 with the murder of Abdul Hafidah.  It  became a high-profile case, with extensive national news coverage, which saw 12 Manchester teenagers on trial under  joint enterprise laws, due to prosecutors deciding that the group of black males that were around the estate that day were part of an organised gang. Between the eleven convicted (one was acquitted) they were sentenced to a total of 168 years in prison.

A Guardian article on the trial and conviction raised accusations that the case was “riddled with racism” and called into question the validity of the “gang narrative” used by the prosecution that had allowed the joint enterprise laws to be used.

The “gang” label is one 84Youth find extremely problematic and they class it as “institutional violence” in part due to gang databases used in many urban areas by the police and other agencies that can perceive innocent long term friendships as gang associations which 84Youth say leads to “oppressive policing.”

“So, all these kids were being held responsible for another person’s actions. That weren’t even old enough to buy alcohol, get in a club, get a house, or go to university. They weren’t old enough for any of those things. But they are old enough to be held accountable.” Akemia said.

On the same day as the Abdul Hafidah case verdict in 2017, while the community were grieving the friends and family that had been sent to prison, another violent attack happened in the area, that left  18 year old Sait Mboob dead. Akemia said:

“The 8th of the 8th is a very significant day to us. We had a lot happen. We had the big joint enterprise thing, and we had the murder. That was my trigger to make me want to do something.”

Akemia believes that the people in her community are living with an ongoing cycle of trauma and stress, which 84 Youth’s website states “in most cases this is not Post Traumatic Stress but Perpetual Traumatic Stress as those affected get no support and remain in the situation that caused the disorder.”  She is trying to increase the profile for 84Youth’s prefered term of perpetual traumatic stress disorder (not currently a recognised medical term) to help people in communities such as Moss Side break out of the cycle of trauma and stress they experience, by developing alternative programmes to address the specific type of stress these communities face.

“I want to raise awareness of perpetual traumatic stress disorder. Let people understand what we have to deal with. What young people here are dealing with and then the expectation is put on them to be these upstanding, mainstream, engaged, citizens. How do you expect them to do that? You can start as a victim but quite easily become a perpetrator through PTSD,” Akemia said.

Akemia is the managing director of 84Youth, a lifeline of support for the community in Moss Side, Manchester. Their base is a shipping container, in a car park next to a carpet shop just behind Princess Parkway, a busy dual carriageway into the centre of Manchester. Walking by you would never know that the metal container could provide so much needed support to Manchester’s youths. Inside, the micro centre is a place of calm that young people can use for whatever their current needs are. There is space for quiet conversation, a bookcase full of empowering texts, and a television with games consoles for hanging out with friends. The place looks immaculate, and felt warm and inviting.

“A big part of us is real experience. Everyone that works with us is from the community. They have that lived experience of someone that they care about being murdered or being in prison on a joint enterprise charge. We’ve got that shared trauma.” Akemia said.

The support that 84Youth offer is varied and tailored to the people that use the service. It might be helping to write a prepared statement to the police for a crime that you have been accused of or purchasing furniture so that you can set up a new home after fleeing an abusive one. Or providing the support, love, care and time to a family who have lost someone to violence.

Jayvon Morgan worked with Akemia as a child and became one of the founding members of 84Youth. He spoke of how much he loved working with young people and how having a centre like theirs meant that “we’ve been noticed.”

Another member of 84Youth, *Sarah, spoke about how they help the younger people in her community. “We’re approachable, we’re on a level so young people can talk to us. We go out into school and run workshops. It’s all about early intervention. Being a role model and encouraging kids to make the right decisions.”

Never putting a timeline on the help, they give to a young person, 84Youth don’t follow the rules of a traditional youth organisation. “There needs to be more centres like ours,” Sarah said. “We are the go between the police, the social workers, the schools and the young people. There needs to be more conversations like that.”

Akemia praised Greater Manchester Police for their openness with 84 Youth. “They are very good with us. We help them and they listen to us.” The newly appointed Violence Reduction Unit was set up in Manchester in 2019. This Home Office funded initiative hopes to tackle serious violent crime by bringing together police, local authorities, schools and youth organisations. 84Youth have welcomed this movement and Akemia has regular meetings with the board.

“Initially my idea [for the centre] was to pull together some workshops that would have a lot of impact,” Akemia said, as we sat together on a rainy afternoon. “To work with other youth workers around youth violence. But then, the young people that were friends with the one that died and the ones in prison, said, ‘what can we do?’ So, it organically became this youth directed organisation.”

It took her a while to get the centre going. She worked for free in the community supporting herself and her family with an evening job in the clubs in town. She knew that a centre like this was needed and worked hard for two years before they received their Community Interest Company (CICs) status. These are companies which operate to provide a benefit to the community they serve, the primary purpose of CICs is one of community benefit rather than private profit.

Akemia has put the Moss Side community at the centre of her drive.  She never refers to the young people as “them”, instead she talks about her community as “us”. The racism and stereotyping that the black men in her community face is an offence to her, and something that she is determined to oppose and change.

Akemia spoke of the memorials that she organises in the community for the young people they have lost, “we’ve got three or four kids that we do that for. We put out all the balloons, bring food, meet at the spot where they died, and go to the cemetery. The families like it, they appreciate it. They know it’s not just them that are missing them, they know we all care.”

Alongside the work that 84Youth do with the young people of Moss Side, they also deliver more strategic, targeted events and training to try and implement change within the community. They organise open mic nights called CELEBR8YOUTH which encourage the empowerment of young people. A podcast called ILLUMIN8YOUTH that shines a light on youth issues from a youth perspective. And LIBER8YOUTH where they offer a series of interactive sessions, which Akemia says looks at “identity, community, gender, future plans and slowed down thinking, manhood and fatherhood.”

*Sarah is not a real name. The person did not want their real name to be used.

Feature image and all photos are provided by 84Youth and obtained from their social media with permission.