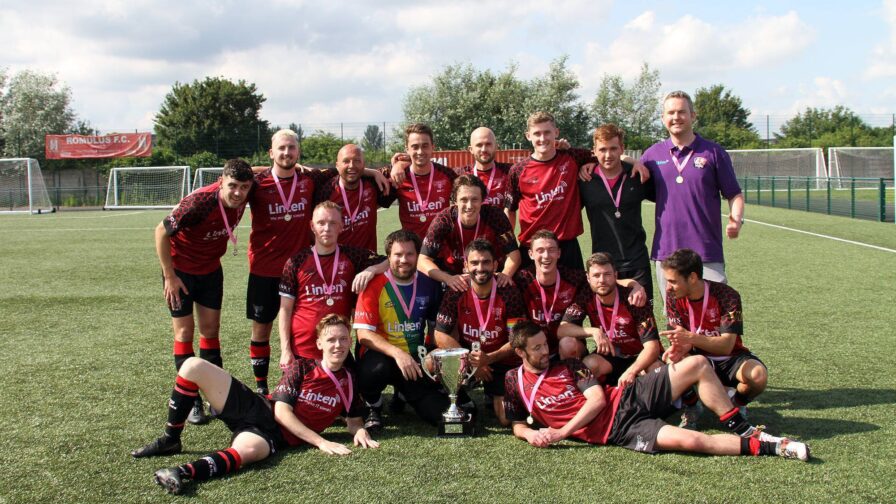 England may have lost the Euro’s final and the St George’s flags have come down, but despair not. Village Manchester FC are flying the rainbow coloured flag high after winning the GFSN Cup, for the third time. The Village players have also fought back successfully against bigotry and hate, during their challenging route to the cup.

The Gay Football Supporters Network (GFSN) are the governing body of the world’s only dedicated LGBTQ+ football league and have provided a safe space for LGBTQ+ people to support, campaign and play football in a safe and encouraging arena for over 30 years.

Village Manchester’s route to the final had been a mixed ride. A closely contested quarter-final against London Falcons played on what Village’s player-manager Jay McNaught describes as quite possibly the world’s smallest pitch, was decided by a last gasp deflected free kick goal scored by the manager himself. And then to Bristol for the semi-final – a comfortable 6-2 thrashing over Bristol Panthers. Bring on the final… so they thought.

The coronavirus pandemic halted play in March 2020 and cut to 18 months later, Village Manchester FC and Millwall Romans were finally given the opportunity to finish what they started and play for the 2020 GFSN Cup, on Saturday 10 July at the Castle Vale Stadium in Brimingham. The six goal thriller ended three all, and the match was decided in a nail biting penalty shoot out – sound familiar? The Villagers however bucked the national teams trend for these outcomes and won 3-1 on penalties.

Speaking to Village left-back Jack Kyle before the final, he said “being able to play the tournament out is an amazing feeling and symbolises the change back to normality and being able to do the things we love doing again.”

When Premier League stadiums closed their doors in March 2020 there was a lot of media coverage about how live football was sorely missed by fans. But for many, including Jack, it was the love of playing the game which was missed the most. And playing for a club like Village, it’s about more than just the football.

This year is Village Manchester’s 25th anniversary, the club was formed in 1996 by a small, yet determined group of friends who created a team to enable like-minded individuals to play a sport they were passionate about in a competitive local league. Over the last 25 years, the club has grown into one of, if not the largest gay and inclusive football clubs in the world. First team goalkeeper Jeremy Baker recalls his 10 year tenure at Village Manchester:

“When I joined it was a small team of a maximum of 25 people and my very first training session wasn’t as welcoming. The more people who came, the more we made it inclusive to everyone and it started to grow into this very welcoming group of people that no matter who you were or where you were from you were accepted. [Village Manchester is] a safe haven for people whether they are out or on the fence or bi or any type of thing that’s quote ‘not a normal part of society’.”

Jeremy has played in many football teams and remembers feeling uncomfortable and at times unsafe when someone in the changing rooms uses a slur and makes fun of a gay or trans person. Jack Kyle echoes his teammate’s words adding that other teams can be quite hostile which Jack argues might be a natural response to the competitiveness of sport creating rifts and egos. “Village wants to win and perform but we’re there for each other,” Jack said.

There are times throughout every season when the team’s solidarity against hate is tested and the last few years have seen a heavy rise in homophobic abuse aimed at the club.

January 2020 saw the club experience one of its worst cases of homophobic abuse which culminated in a national media campaign as the club criticised the FA’s ability to tackle homophobia.

Eighteen months on and there has been no significant change to the FA’s procedures, which take six months or more to resolve a case of abuse. Village Manchester FC decided to put matters into their own hands and it is now their policy to approach clubs directly regarding incidents of homophobic abuse. Manager Jay McNaught says the clubs they have approached have been positive, proactive and have worked quickly, providing suitable outcomes by giving players diversity training and even ejecting players who show no potential to change. Village Manchester are demanding a radical overhaul of how the FA resolve cases of discrimination including speeding up of the procedures, support for referees and mandatory diversity training.

According to manager Jay McNaught, Village Manchester is one of the best clubs in the country because of the two main pillars that run through it – competition and inclusivity. Village Manchester stand by their values and their pressure on the FA aims to promote inclusive football and the fight against bigotry.

As a straight player who has been welcomed into Village Manchester by the club’s inclusive ethos, Jack shares his insight into what makes the club so special.

“I think what Village have managed to achieve is a camaraderie and community – and part of that might just be an intrinsic trait of people from the LGBTQ+ community. Football’s amazing but at the heart of it all it’s really just community. When it boils down to it, that’s what people want and love about the whole thing. It’s a shared experience when your team goes on to win… or lose.”

To find out more about Village Manchester FC – click here

Featured image and all in article images: Village Manchester FC