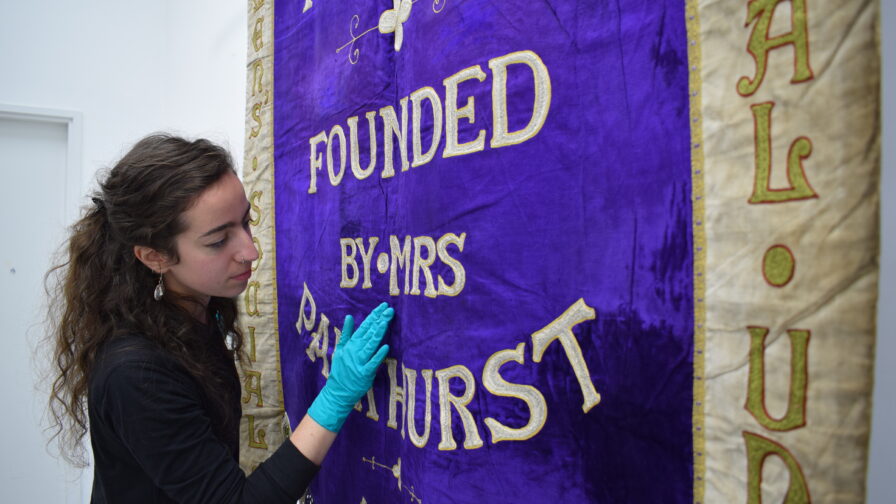 Virtual tour by the Peoples History Museum, published on Instagram, celebrates the struggles for justice and equality by migrant women in the UK.

Although not able to open to the public because of the lockdown restrictions, the museum will celebrate the day by offering the opportunity to virtually visit some precious pieces of its collections that have marked the struggle for women’s rights.

International Women’s Day was established in 1977 with resolution 32/142 by the United Nations. Following widespread demonstrations, mostly linked to socialist movements, all over the world which fought for peace and equal rights between women and men. The United Nations decided on  8 March as the date on which the battles for women’s rights were formally remembered.

During the 20th century, women made many strenuous steps forward in securing their rights in society but there are still many challenges and many countries where women have no voice to claim their rights.

Remembering the stages of this difficult path that involved many women at different places and times is important, to celebrate their victories and find inspiration in the face of the many challenges that women still face.

The virtual tour will touch some of these stages starting from the one for the right to vote carried out by the Women Social and Political Union (WSPU), the movement commonly known as the suffragettes. Since 2017 the People’s History Museum has hosted the original banner of the suffragettes of Manchester, created in 1908 by well-known makers of the area Thomas Brown and Sons.

In the banner other than the colours of the WSPU purple for dignity, white for purity and green for hope, it is possible to see the name of Emmeline Pankhurst, a founder of the WSPU in 1903, in Manchester. The banner today in the PHM was first displayed on June 20, 1908 in Manchester’s Stevenson Square before being brought the next day to Hyde Park London.

Two of the members of PHM’s Community Program Team, Muliana Adjamian and Agnes Fough worked on the creation of the International Women’s Day tour, trying to focus on personalities who, despite being less known, have made a great contribution to the fight for women’s civil rights. Jayaben Desai an Asian migrant, for example, who arrived in UK in 1970 and led a strike against unfair and discriminatory pay for almost two years that sought union recognition at the Grunwick film processing factory in Dollis Hill, in the London suburb of Willesden. A struggle that is still relevant today for women in many workplaces.

“Women have been marching through history helping to create a fairer and more equal world, but their stories have often not had the light shone on them that they should have. The International Women’s Day tour of the museum that Muliana and Agnes have developed does just this, but in particular it focuses on women who migrated to the UK and the impact their actions as change makers have had.

“As individuals who have experienced migration themselves, having these stories illuminated by women such as Muliana and Agnes, who are part of PHM’s Community Programme Team, is important to the museum and we look forward to sharing these.”

Despite the restrictions, the museum wants to involve the public through activities, mostly free or with a small fee in some cases, which can show important events in the history of women and consequently of society as a whole. One of these activities was created by suffrage expert Helen Antrobus, Represent! Voices 100 Years On podcast , which is in six episodes and tells many passages of the campaign for universal suffrage.

A virtual Doodle Den has also been designed for the youngest who, through the creation of their own den indoors, can take part in the activities of the museum by downloading some drawing tools and starting to prepare for the next struggle for rights.

Live demonstrations are still being curtailed around the world due to restrictions on socialising to help combat the pandemic, but the vaccination programme offers hope that some will again be able to socialise and demonstrate more freely as the year progresses.

From the deprivations we have experienced due to lockdown this last year, women should be celebrated even more. Many of them have been on the front line in schools, in hospitals, many teachers have had to manage on the one hand their students online and on the other their pupils in person under the challenging conditions of teaching while maintaining social distancing and increased hygiene procedures. Going back to review the stages that played important parts for the fight for women’s rights is an ideal way to remember where we came from and decide where we want to go from now on.