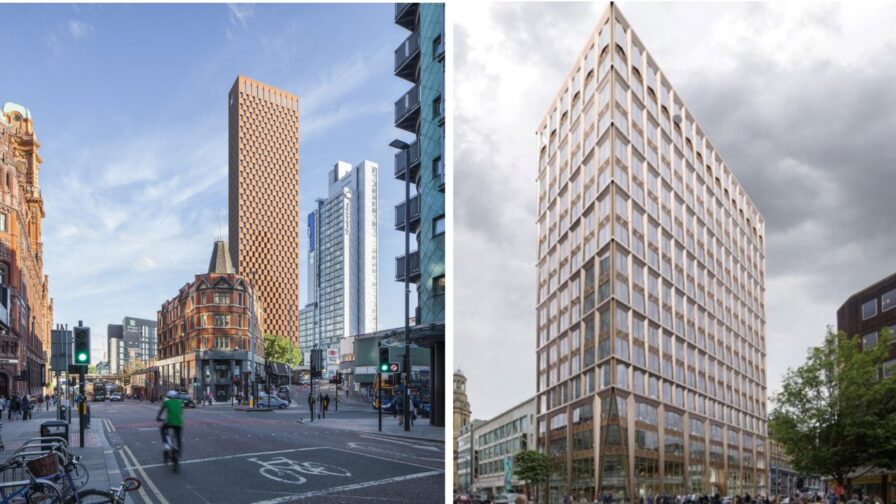 A 54 storey student tower, dubbed the ‘brick tombstone’, a heritage clashing Deansgate office complex and a proposal to repurpose an iconic Manchester landmark all received scrutiny at this month’s planning committee.

A decision on whether to allow a 54 storey student tower near Oxford Rd, dubbed the “brick tombstone” by Deansgate councillor William Jeavons, was deferred by Manchester City Council’s planning committee on Thursday. A proposal for a high-rise office development on Deansgate was also rejected due to it clashing with the heritage of the area.

In a discussion of another proposed development, which combined heartfelt representations from councillors and residents, the committee approved a huge redevelopment of the Rylands building which hosts the Debenhams department store on Manchester’s Market Street.

“A tombstone over our neighbourhood“

In a pall of negative publicity, mass objections and possible legal challenges over the “tombstone” the planning committee has deferred a final decision until February. The development, a 54-storey tower accommodating 853 high-end student apartments had attracted the ire of residents in the nearby Macintosh village, ward councillors and the University of Manchester alongside over 200 individual objections.

The developer GMS Limited argued the tower would constitute “an iconic landmark building of exceptional design quality, which will make a positive contribution to the local area and Manchester’s evolving skyline.”

Residents of Macintosh Village, a residential community based on the same road, have instead dubbed the development “brick tombstone”. Alongside the visual impact and overshadowing of their neighbourhood by the 54 storey tower, several residents mortgage agreements could be invalidated should the development go ahead.

In a heated planning session Mike Halley, a village resident and chair of its Management Company, condemned the tower saying that no-one could look him, “in the eye and suggest a 165m brick gable end with no windows is visually attractive and is sympathetic to the surrounding area.”

Since its announcement in 2018 residents of Macintosh have been campaigning against what they have called the “studentification” of their neighbourhood. The village has already had the construction of the 39 story Liberty Heights student flats on its doorstep. The addition of 853 new student units in the current proposal would transform the neighbourhood into a majority student area, MVMC calculated.

Ward Councillors William Jeavons and Marcus Johns have objected to the proposal. Johns spoke to the Meteor before the meeting:

“This application is entirely inappropriate. We have supported residents in this fight since 2018 and we know the immense stress it has caused to them, especially over the legal issues related to their rights as leaseholders.

“Residents have likened it to a giant tombstone and they are right. Its height is wrong. Its design is wrong – including a windowless gable end towering over the community. And, the sheer number of students it would house would flip the balance of the local community and is also wrong.”

The committee responded to the evidence presented with a by giving a months delay on deciding on the proposal to allow a site visit. After more than two years of campaigning, residents will have to wait to make their case again in February.

A 17 storey office development proposed to occupy a prime spot at the head of the Deansgate-Market Street junction was rejected by 10 votes to four. The proposal, put forward by Kames Property Income Fund, involved the demolition of the 60s built tower already on the site and the erection of a new office block.

As reported back in December the proposal received a cool and critical reception from councillors and Historic England who cited an overbearing effect on the adjacent Grade II listed Barton Arcade and nearby heritage asset of St. Annes Church. The proposal was deferred by the planning committee at the meeting in December.

In a report to the committee Chris Sinton, the agent for Kames Property argued that public benefits including 227 direct construction jobs, around 1000 operational jobs and a gross business rates contribution £2.3 million per annum outweighed minimal impacts on heritage and nearby residential amenity.

Residents in No.1 Deansgate, a building opposite the site, objected to the proposal due to balconies and living spaces in the apartments not having blinds and its design would make it difficult to fit them.

Rosin Sally, a representative from the block’s management said: “It would be possible to look through the balconies into every room. This is a direct intrusion into our right to privacy.”

The existing building, to be demolished under the proposal, was refurbished in 2013 but Sinton argued the building was now in a poor state of repair with rotten window frames and damp on internal walls. Lacking in new infrastructure such as superfast fibre broadband he argued it was ‘nearing the end of its economic life’ while the planning report claimed the current layout was “unattractive to the market.”

Cllr Joan Davies criticised the assessment. “That is a judgement, not a fact, I presume it also means it won’t attract quite such high rent, these features are common in many other buildings in the city, are we going to be knocking them down as well?”

Cllr Jon Connor-Lyons then moved a refusal of the application which was accepted by the committee representing a victory for local residents and councillors opposed to the scheme. The applicant has the right to appeal or amend the proposal and ask the council to reconsider it.

A proposal to renovate the Iconic Rylands building, home to Debenhams, into offices has been approved despite objections from local councillors and over 50 nearby residents.

Katie Wray, an agent from Deloitte LLP spoke in favour of the development. The plans involved the full renovation and a 4-storey roof extension to the Grade II listed building which would provide almost four football pitches-worth of Grade ‘A’ office space supporting more than 600 jobs during construction. Once finished the revamped building is estimated to provide space for up to 2,400 jobs, generating £235m of annual value to the city’s economy.

The developers CD9 Properties are acting on behalf of property-giant owners AM Alpha Kapital who purchased the landmark building for £87m in 2017. The proposal also involves carving a multi-story light-well out of the building’s core to brighten the upper floors.

Initially built in 1932, as one of the City’s largest textile warehouses and clad in original bright white Portland stone, its classical modernist exterior and interior art deco decorative style are intended to be preserved.

However, while the lower floors have been occupied by a Debenhams department store, the upper four floors had remained empty. Irregular maintenance, the applicant suggested has caused a need for serious repair.

In a redacted financial viability report the costs for restoration are put at £5.87m. It includes a further option of an extension-less renovation, which the developer has said make the proposals ‘unviable’. As key data is redacted it is not possible to verify the developer’s projected rental and profit yields.

Over 20 objections from residents in nearby Birchin and Lighthouse buildings on Joiner Street were received criticising the ‘bolted-on’ out-of-keeping design of the modern extension and its height.

After being further boxed in by a new apartment block on the adjacent Church Street Car park residents now fear a significant to total loss of daylight.

Ward councillor Sam Wheeler said he thinks most people would, “admit that the box on top of the Grade II listed building is incredibly ugly.”

“I understand the economic arguments, but before we steal the sun from the homes of 50 Mancunian families can we ask planning and the developers to look whether anything can be done to minimise the loss of light in for residents in these buildings.” The committee voted 8-2 in favour of approval. A Manchester landmark has a new lease of life while debates about overdevelopment and the rights of current residents continue.