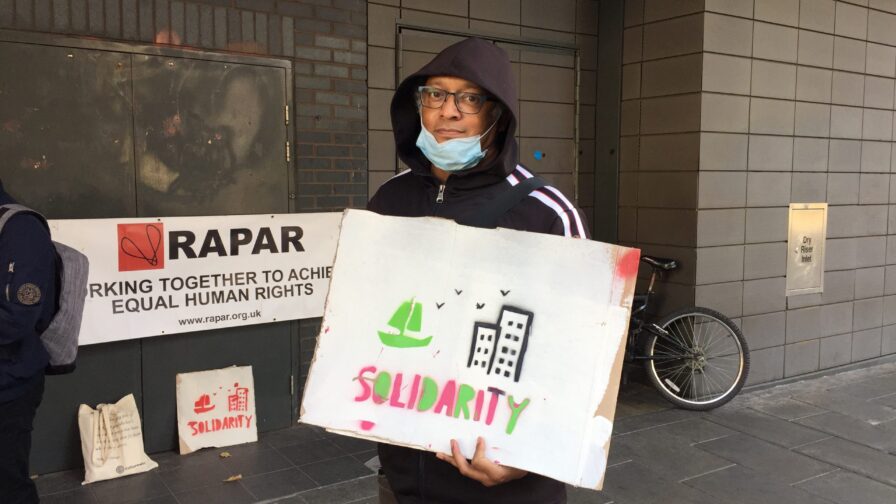 Human rights campaigners in Manchester are protesting the re-opening of Immigration Registration Centres which had been closed due to Covid-19, and have joined a nationwide call for Leave To Remain to be granted to all undocumented migrant people.

Socially distanced peaceful protesters gathered at the Asylum and Immigration Tribunal Offices at Piccadilly Plaza in Manchester city centre on Saturday 19 September to call for an end to the government’s Hostile Environment policy and Leave to Remain for all undocumented migrants in the UK.

The demonstration was organised by the Manchester group RAPAR(Refugee and Asylum Participatory Action Research), a Salford-founded human rights organisation working with refugees and asylum seekers since 2001 to improve the lives of migrants in the UK.

The event was attended by supporters of those affected by the Hostile Environment and migrants with lived experience of the UK immigration process, who gathered in Manchester, Coventry and London in unison to show solidarity with the Status Now Network.

Protesters in Manchester demanded an immediate reversal of the government’s decision to resume registration of undocumented migrants at the Immigration Registration Centres in England, which had been paused this year due to Covid-19. The event leaflet also called for the end of Britain First’s sustained harassment of refugees who have been placed in hotels during the pandemic.

Noah, now a Manchester resident after arriving from Zimbabwe in 2005, spoke at the rally about the confusion caused by the sudden announcement to re-open Immigration Registration Centres, saying:  “my friend has received a text telling them to go sign but I haven’t”.

In a letter dated 15 September 2020 and seen by The Meteor, the Director General of HM Passport Office and UK Visas & Immigration wrote that the Local Authority Chief Executives have now been informed on “cessations” and that “these will start with immediate effect in England” and after consultation in devolved administrations. Cessation means a person’s refugee status may be withdrawn for a number of reasons, opening up the possibility for that person to be removed from the UK.

James, a social worker from Stockport working with RAPAR, described the decision to re-open Immigration Registration Centres as a “rushed” and “callous way to treat some of the most vulnerable people in society, and irresponsible in the light of the Covid-19 pandemic.”

Status Now Network’s “Status Now 4 All” campaign – started by an open letter to the Prime Minister of the UK and the Taoiseach of Ireland on 28 March – calls on public officials to act urgently on the issue of migrant people’s welfare, some of whom are destitute and without access to the NHS or its Irish counterpart.

Migrant people without any funds and unsuitable accommodation are unable to socially distance during the ongoing Covid-19 pandemic, the letter says.

By August, the letter was signed by 80 organisations across the UK and Ireland. But Rhetta Moran of RAPAR told The Meteor that the letter “has not been acknowledged, let alone responded to.”

“We are saying ‘provide housing, healthcare and food’, because all of our evidence shows that it is not possible for people to exercise appropriate public health measures and they are not being enabled to do so. And that is why we are here,” Moran went on to say.

Noah has been through the UK immigration system as an asylum seeker and is negatively affected by the 15 years of uncertainty caused by the lack of a legal status. For him there is no home to go back to in Zimbabwe. He escaped Zimbabwe and the Mugabe regime after being abducted, having his home burned down and going into hiding.

An active member of RAPAR and also of the Zimbabwean opposition party group in Manchester, Noah explained how difficulties caused by the lack of hospitals in Zimbabwe have been worsened by the Covid-19 pandemic, coupled with abductions of members of the opposition political parties and violence, including rape and killing of people inflicted by the current government of President Emmerson Mnangawa, saying, “people are suffering [in Zimbabwe].”

Noah explained his situation with regards to Covid:

“Although socially distancing has been difficult in my situation, I have had to self-isolate because I’m diabetic.”

Alimamy, resident of Manchester from Sierra Leone and a member of RAPAR, echoed his words.

“People who suffer the most during Covid-19 are asylum seekers; you don’t know when the Home Office will ask you to get out of your home and when they send another letter removing you- this is mentally difficult. And it impacts our families too. Especially in lockdown not being able to visit anyone else made it particularly hard”.

Moran told the fellow protesters how a new RAPAR member, a non-English speaking man from Sierra Leone, had been told by two Home Office officials that “there were certain countries where Britain is not accepting applications for asylum and he could not claim asylum. This is a lie”.

Home Office Immigration Rules on asylum paragraph 327A state that “Every person has the right to make an application for asylum on their own behalf”. A Home Office spokesperson told The Meteor that “there is no blacklist of countries where people cannot make an asylum claim and we never refuse to register a claim”.

Moran told the protesters and passers-by on the busy street:

Alimamy, who now has legal status in the UK, described the pain of not belonging and being labelled as illegal:

“Not having a status is like prison after having fled another country and still being stuck, leading to a very bad mental health state.” He urged the government to “give status for all to allow people to work” and told the protesters that “we refugees want to be an asset, we want to contribute to the UK society”.

Speaking about the positive protest spirit, Moran asserted that “we are not going to be intimidated out of securing our rights or our ability to protect ourselves and each other in the wider community,” and that RAPAR would carry on the fight for rights.