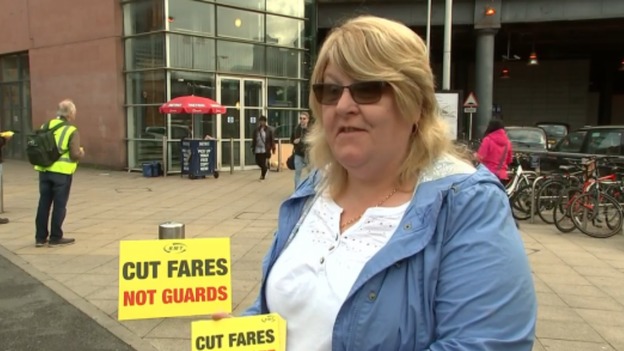 The first female president of The Union of Rail, Maritime and Transport Workers, will oppose the Tory proposed ban on all out transport strikes, at the Manchester Trades Union Council Annual General Meeting.

Michelle Rodgers, first female president of the RMT (Rail, Maritime and Transport Workers) union, is to speak at the Manchester Trade Union Council’s Annual General Meeting on 15 January, at the Mechanics Institute.

The RMT recently pledged to oppose any attempt by the current Conservative government to stop its members from going on strike. The RMT’s pledge followed the pre-election threat by the Conservative Party and Boris Johnson to make all out strikes on public transport illegal. Johnson has proposed that minimum service requirements should be run in public transport systems affected by strikes, restricting the union’s ability to disrupt services as part of collective action.

A motion to be put before the Manchester TUC AGM states that the government proposals will effectively diminish:

“…our right to strike and reduce collective bargaining to nothing more than collective begging. Manchester TUC believes we cannot be caught on the back foot and the fundamental right to withdraw our labour must be defended by any means necessary. After us they will come for every other union in the country.”

Rodgers, who is based at Manchester’s Piccadilly Station, has worked on the railways for nearly thirty years in a wide range of roles, including cleaner and guard. Last March she became the first woman in the union to be elected as president. Rodgers said of her victory:

“I’m over-joyed at the win, which belongs to the members who voted for me. The support around the country has been amazing… RMT is a great union and has proved how progressive it is electing its first female president. I promise to fight for the members at a difficult time in our industry that requires strong, principled leadership.”

Also on the agenda at the AGM is proposed TUC support for a comprehensive list of actions to alleviate the climate emergency. The Manchester TUC annual report will be presented at the meeting and the role and relevance of the TUC in a rapidly changing society will be discussed. The AGM is open to all, you do not have to be a union member to attend.

There is a meeting to plan  anti-racist and anti-fascist campaigning in Manchester at 6:30pm on Wednesday 12 February at the Mechanics Institute. Individuals and organisation’s wishing to support the campaign can sign this open letter by emailing secmtuc@gmail.com. For more details – click here