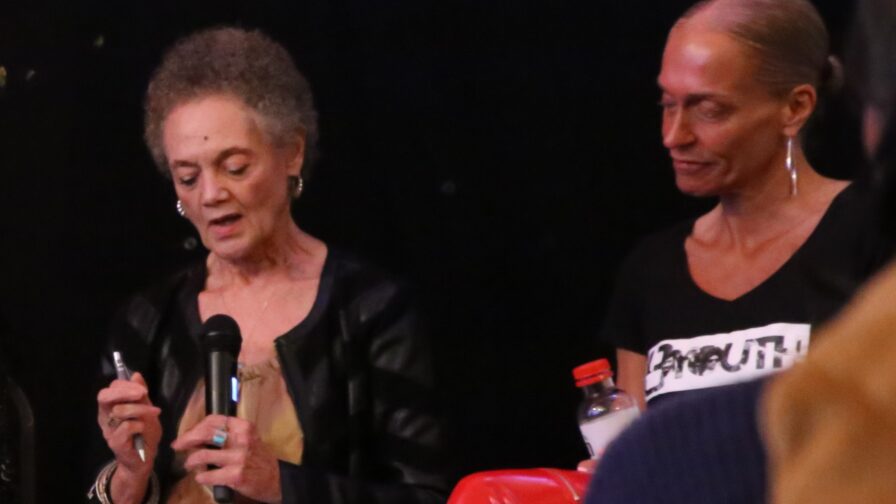 Moss Side has historically been one of the most deprived areas in Britain, and still today it suffers from the narrative regarding the events of the 1980s and 1990s that saw widespread poverty and unemployment lead to high rates of drug-related crime and a series of shootings.

However, Moss Side also consists of a bold community that rejects this monolithic legacy and indeed has set up a series of initiatives to actively engage young people and prevent the vicious circle of deprivation-crime-policing. Local people have been fighting for years against the criminalisation and pathologisation of Moss Side communities, even in supposedly progressive publications like The Guardian. The trite and lazy narrative of Moss Side as a problematic area evolving from a ‘gang crime’ area into the ‘cradle of jihadis’ does nothing but mislead the public, oversimplify complex social issues caused by decades of the government neglect, and undermine the hopes and wishes of this lively multicultural community. While policing is regularly used worldwide as an easy and profitable response to poverty and racial tensions, it has also proved to be the most useless and unsuccessful strategy to solve these issues. 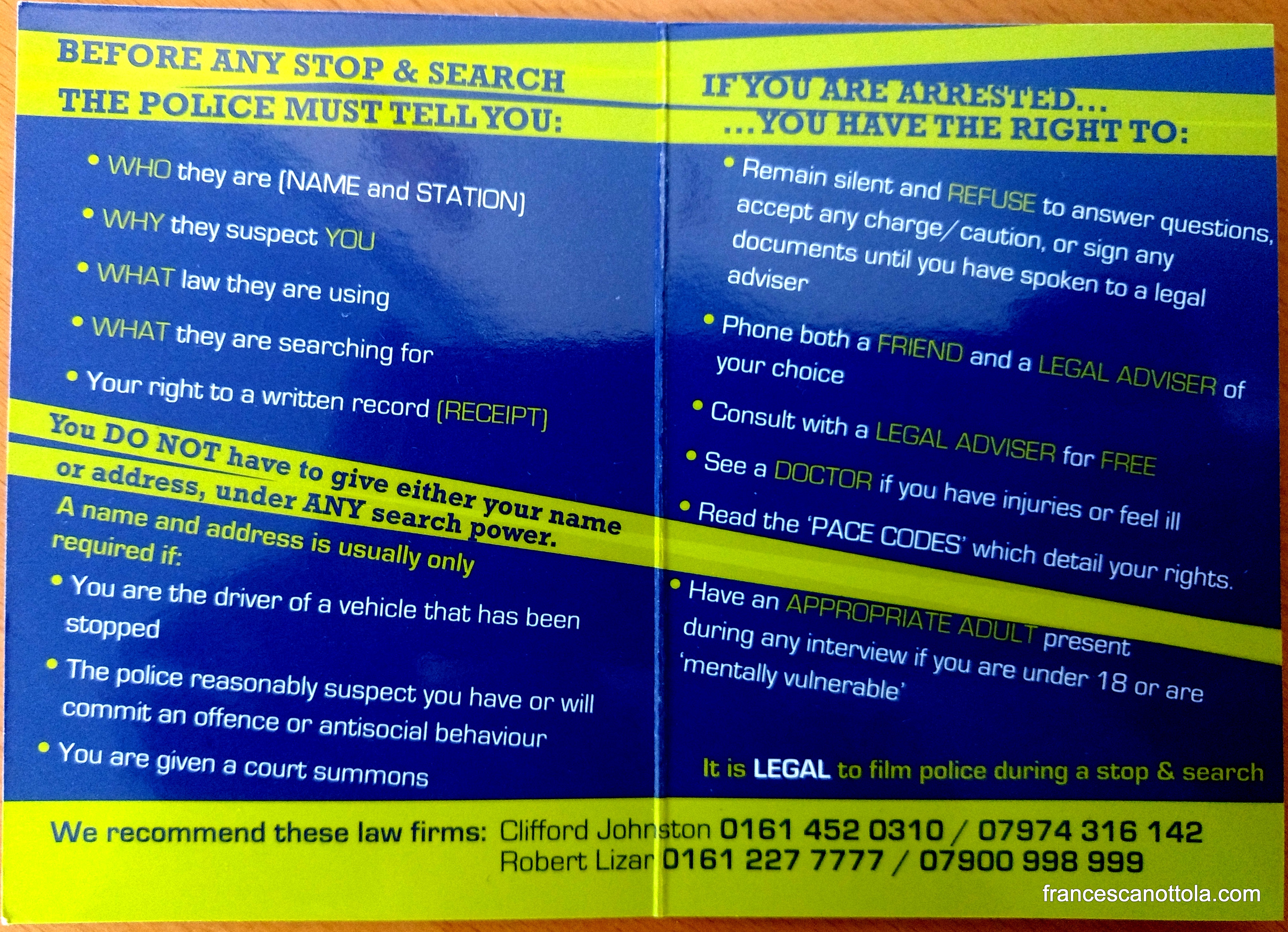 This and many other issues were at the core of a hotly anticipated discussion entitled ‘Resisting policing and racial injustice’, that took place on Wednesday 20 June at The Big Western pub, in Moss Side, Manchester. Organised by the Northern Police Monitoring Project and Racial Justice Network, the event consisted of two hours of intense debate in a packed room about the consequences on black and minority ethnic communities of the ‘hostile environment’ policy, Brexit, and, in general, of the ‘War on Terror’ that has normalised surveillance and, too often, uncritical support of how police forces operate in areas largely populated by black and brown citizens. A symbol of the seriousness of the situation is a leaflet distributed in the room titled ‘Know your rights’ providing legal advice in the event of stop & search or arrest by police.

Tanzil Chowdhury, lecturer in Law at Queen Mary University of London and member of the Northern Police Monitoring Project, introduced the event, and Katy Sian, lecturer in Sociology at the University of York, chaired the discussion which included an outstanding all-female panel of anti-racism activists and organisers.

The first speaker in the panel was  Malia Bouattia, former president of the National Union of Students, its first female Muslim leader and renowned anti-racism and anti-colonialism activist. Bouattia spoke at length about the racist and Islamophobic abuses of the ‘Prevent’ counter-terrorism programme and how the media contribute to perpetuating racist and Islamophobic tropes, encouraging the dehumanisation of racialised communities and uncritical support of police forces. Bouattia suggested that in the name of security, the government uses surveillance to monitor and silence all forms of dissent. The activist also quoted some chilling statistics about the racial profiling of young black and Muslim men, with the latter reported to be subject to stop and search at rates of 80% in comparison with other groups.

Co-ordinator of the Racial Justice Network and anti-racism organiser Peninah Wangari-Jones was next to speak, focusing on the colonial roots of the current migration crisis and how structural racism tries to keep marginalised communities silent and helpless. Her organisation has produced several reports about the importance and effectiveness of community work and about the damaging effects of media representations on BAME citizens. She underlined how society at large, through institutions and actors such as banks, landlords or GP surgeries, has become an accomplice in the denial of human rights of asylum seekers, who often avoid seeking health care or homelessness support for fear of arrest and deportation. She also highlighted the absurdity of expecting asylum seekers to integrate into British society while simultaneously preventing them from working, driving, studying or even volunteering.

Wangari-Jones dates back the ‘hostile environment’ culture to well before this Conservative government to the centuries of colonialism and slavery. Her argument is that Western societies have a duty to address the issues caused by colonialism (poverty, debt, wars, climate change, tribal fights, undemocratic elections) and provide reparations. She also calls out the media dehumanisation of the thousands of migrants dying in the Mediterranean by presenting them as figures with no names and no histories.

This concept of the higher ‘grievability’ of certain, namely white, deaths over others had also been described very effectively by Judith Butler in Frames of War. Racism in news reporting is striking: we just need to think of how the media devote days or weeks to create profiles of white victims of terrorism, for example, but completely erases the individuality of thousands of victims of wars, natural disasters, migration. Not to mention the shockingly racist distinction between migrants (BAME) and ‘expats’ (white). Wangari-Jones calls for an awareness campaign among BAME communities and for more solidarity, unity and intersectionality between different social groups, as well as a profound revision of the history curriculum that includes the truths of Europe’s colonial crimes.

Panel member Akemia Minott is a lifelong Moss Side youth worker and founder of the 8 4 Youth project. Her community work aims at subverting the highly damaging ‘gang narrative’ cast upon racialised communities and at providing opportunities for young people and vulnerable adults, in addition to monitoring and denouncing abusive police practices.

With reference to the figures documenting the harassment of black, Asian and minority ethnic men by police in comparison to white youth groups, Minott quoted a 2016 report by Patrick Williams and Becky Clarke of Manchester Metropolitan University concluding that contemporary policing and prosecution strategies in England and Wales are far too often informed by persisting racialised stereotypes rather than actual data.

While Minott too calls for close monitoring of police behaviour and calling out media criminalisation of ethnic minorities, she also draws attention to other crucial problems: the whiteness of the judicial system, the high rates of incarceration of minors and the shocking figures of deaths happening in police custody with no accountability for police officers and constant smearing of victims. However, the youth worker does not shy away from acknowledging how a significant part of minority group young men, in a deprived and racist context in which they are taught not to attribute value to their own lives, can also become instruments of their own oppression by glamourising gangster lifestyles and criminal behaviours. The activist concluded, like previous speakers, that poverty, inequality and trauma are the core issues that need to be addressed rather than feeding the very profitable prison system.

The final talk was given by Kathleen Cleaver, former Communications Secretary for the Black Panther Party for Self Defense in the United States, currently a lecturer at Emory University, and world leader in the fight against racial injustice and police brutality. The legendary activist focussed on a few main points at the core of racial injustice: poverty, an insufficient degree of education and awareness in BAME communities, state brutality, biased news coverage of police behaviour and, at the basis of it all, white racism.

Cleaver said that it is crucial to unite and network with all organisations aiming at dismantling institutional racism and, in particular, to educate children and teenagers to challenge the status quo and believe in their right to fight, organise and resist oppression. Cleaver underlined the importance of keeping a regular schedule of various types of initiatives to keep the community engaged. She recalled that police, in order to justify brutality, would often claim that they had been the victims of unprovoked attacks. Cleaver encouraged all activists to overcome the fear of leaving their homes and to instead focus on the ‘joy of the struggle’, despite surveillance and the inevitability of infiltration of movements by intelligence agents. Finally, she concluded her talk with a classic Black Panther Party call: POWER TO THE PEOPLE!

Hardly anyone is more qualified than Kathleen Cleaver to advise on how to fight back against government repression. The Black Panther Party (BPP), stemming from the frustration with brutality against the non-violent anti-racism movements of the 1950s, was at the core of the American civil rights movement of the late 1960s and 1970s. The BPP was also the recipient of what is possibly the most aggressive FBI programme against dissent in the United States: COINTELPRO.

In an interview from 2011, Cleaver explained that COINTELPRO was aimed at destroying not just the BPP, but all dissenting political movements, including communism, socialism and feminism. COINTELPRO would involve surveillance, infiltration, defamation, harassment and depriving movements of their financial and human resources. Activists would often be charged with crimes they had not committed so that they would be in jail or spend all their funds on legal expenses. COINTELPRO did not stop at anything, and many Black Panther Party activists, such as Fred Hampton and Mark Clark, were brutally murdered.

When the BPP was active, leading COINTELPRO operations was Edgar J Hoover, after whom the FBI building is still significantly named. Notoriously, Hoover labelled the BPP as ‘the greatest threat to the internal security of the country’. Although the activity of the Black Panther Party has not been free from criticism, particularly in relation to its misogyny, homophobia and violence against suspected informers, the party has left a fundamental legacy in the history of organised resistance, not just for minority ethnic groups, but for the entire civil rights movement. Still today, the educational and social work carried out by the BPP in deprived communities all around the United States provides a powerful example of active resistance at a time when the resurgence of a particularly vicious and internationally organised right makes it mandatory to create a strong network of all progressive organisations to defeat it.

Infiltration, ideological divisions, the criminalisation of children and teenagers discussing politics at school, egos in movements, media distortion and the importance of having an organisation’s own media were all discussed in the Q&A session that followed.  Another question that emerged from the debate was how to support families affected by the incarceration of their loved ones, particularly if minors.

The speakers advised that these families need first of all practical support: financial means to travel to visit their family members, as well as medical, psychological and legal aid for prisoners. Intersectionality was also brought up a few times, with several activists expressing their frustration at the difficulties of bringing together different groups. All participants agreed, eventually, that it is far more important to focus on common goals rather than differences and accept that, on some issues, unity is not always possible.

For more information about the event organisers, visit http://www.racialjusticenetwork.co.uk/ and http://npmp.co.uk/.

The Northern Police Monitoring Project are holding another public meeting, on policing and deportations of asylum seekers, on 30 July 2018 at the Moss Side Millennium Powerhouse, 140 Raby Street M14 4SL.