McStrike is the tip of the iceberg: unionisation is needed across the hospitality industry 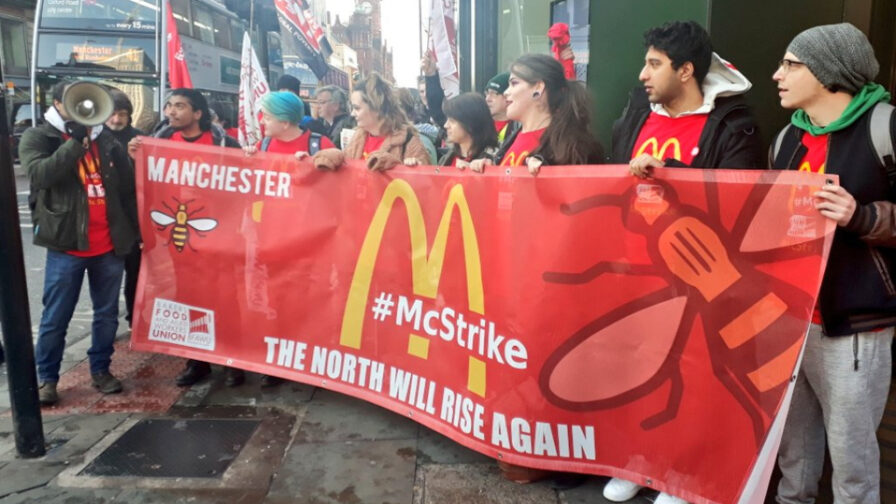 Manchester’s McDonalds workers are leading the way against poor pay, working conditions, and lack of union recognition in the hospitality industry with their ‘McStrike’ on 1 May at the Oxford Rd store in the city centre. But there is still much work to be done in getting other hospitality workers to organise.

The Meteor had a brief conversation with Alex*, one of the Manchester ‘McStrikers’ currently organising for serious change, prior to the strike last Tuesday. The McStrikers scored a victory last year when a strike in McDonalds stores in Cambridge and London resulted in a pay rise and a promise to offer all workers guaranteed hours contracts in place of zero hour contracts. But the promises given by McDonalds on pay and contracts have not been kept according to Alex (and others) who says: “they’ve tried to palm us off with less than half measures, so now we’re staying on to win it all”. He represents one part of a strident rebellious renewal of labour politics in the UK which is fighting against the growth of insecure work, low wages and illegal conditions.

Many workers in the hospitality industry are at the tougher end of the labour market. Pay is low, work is insecure and employers have the upper hand, due to the UK’s extremely restrictive regulations on union activity. This puts significant barriers in the way to effective unionisation of hospitality workers. This results in the employees of the accomodation and food services activities within the hospitality industry having one of the lowest union density levels in UK at just 2.5% in 2016; dropping from 7.9% in 1995.

There has been a general decline of union membership across all sectors in the UK, helped along by the repressive Trade Union Act 2016 which introduced arbitrary thresholds in industrial action ballots, greater government powers to restrict picketing and union financing. This follows the Tory tradition of passing anti-union legislation, such as the Thatcher era Employment Act 1980 and Employment Act 1982. The latest bill highlights the hostile political environment the government is manufacturing in its continuing drive to undermine the trade union movement. At a time when union support is needed most with UK workers experiencing the longest period of falling real term wages since the Napoleonic wars.

The hostile environment for union members provided by government legislation, has been aided by Britain’s right wing press and their relentless demonisation of union membership, and poor reporting on industrial action.

But despite the numerical decline and demonisation of union membership a Fabians Society report, ‘Future Unions’, on the plight of private sector unionisation found that there is still a widespread belief that unions represent an essential social good.

I have been through multiple workplaces within the bartending industry. Throughout I never had a contract with guaranteed hours, holiday or sick pay. My current job is alright, it pays National Minimum Wage of £7.38 but tips raise this to around £8 on good days. These are the best working conditions I have experienced.

These conditions are only present because my manager has made the decisions to bring these conditions about. He isn’t obligated to provide them. My job is decent simply because my boss is nice. In too many workplaces bosses are not so obliging. Workers either have to fight for their rights, or alternatively as is more common, just leave and find better conditions elsewhere. The result is that bad treatment goes unpunished and poor conditions persist.

Young people are growing up and working within an industry in which working standards are regularly breached, pay is rubbish, jobs are transient and contract conditions in practice are malleable. This fosters a generational identity which accepts and internalises poor conditions as the norm.

We live in a post-industrial service based economy, and yet many people still regard service work as unworthy of sufficient wages or protection. On a macro economic scale this has a detrimental effect on the economy – people who get paid less also spend less – so in a society based on consumerism low wages just make no sense.

But on a cultural level it’s also nonsense since, while it runs counter to our public mythology as a ‘nation of makers’, we are increasingly a country of baristas, bartenders and call centre workers taking orders and customer service calls from each other.

The key goal of unionisation is to gain recognition from an employer as the group that represents the workers, once that is obtained you can legally negotiate on their behalf, however the fragmented environment of the hospitality sector makes this difficult.

The way in which unions have to organise is changing though. The McStrikers are re-illustrating to young people that a union, is at its heart a collective of people fighting for a better way of life. “We’re not asking people to join [an organisation], we’re just asking, do you want change? Do you want something better? The result is the same”,Alex says.

We need to look at new grassroots campaigns led by the Independent Workers Union of Great Britain, to highlight this potential in the struggle against the decline in working standards. Representing couriers and logistics workers last year they took Deliveroo to court demanding they pay the minimum wage and provide holiday pay. Unfortunately the company utilised an “army of lawyers” to remould their terms and conditions which scuppered the case at the last second. The dispute isn’t over yet though. The IWGB is gearing up to appeal the ruling this year with new evidence.

Strikes work, and industrial action by the Bakers, Food and Allied Workers’ Union (BFAWU) against McDonalds use of low wages and zero-hours contracts saw success last year when workers walked out at branches in Cambridge and London. As a result McDonalds raised wages for all workers with a limited number getting £10 an hour. But the company has reneged on key promises and faces renewed dissent, which is why McDonald’s workers in Manchester, Cambridge, Crayford and Watford stood up to their employers on 1 May.

Fundamentally the gig economy is short term thinking, and a long term disaster. The flexibility is entirely one way, since workers, often on minimum wage or less desperately need the hours. This allows businesses to ignore hard won workers rights won by union activity in the past.

Until there is new political will to alter this situation we should look to immediate solutions of resistance like this against industry efforts to degrade working rights and wages.

Essential programmes like Unite in Schools which introduce and promote unions to young people should be extended to combat the damaging pro-business narrative which has led us to the situation where 10 million Britons are in unstable employment.

Young people often have very little money and few assets. Increasingly as nation we haven’t any either, the fact that at least 16 million people in the UK have less than £100 in savings is a travesty experienced widely among our age group. The few assets we do have include our low wage value and our young bodies which can do long, low paid shifts in poor conditions – recover, and then be in for the next day. But if you can’t work, due to ill health or injury, you truly are in dire straits.

The issue is that for many younger people social security safety nets are becoming increasingly threadbare. If you are not graced with inherited wealth of some kind you can go from full employment to the street, with just one piece of bad luck. The shocking statistic that one in five young people have been homeless in the past year seems impossible in what is one of the wealthiest countries in the world. Yet it is easier to understand when considering a huge number of young people in the hospitality industry live a marginal hand-to-mouth existence with very little leeway between them and the street.

The great conservative ideal of the youth earning their financial independence would only be applicable if we still lived in a time when wages were high, jobs came with employment rights and contracts were stable. Instead we inhabit an economy where high paying jobs are few and far between, many graduate careers start with unpaid internships, and normal jobs are increasingly menial, meaningless and manipulated so as to give minimal rights us for the least pay.

The Turner Report into the gig economy concluded last year that many employers prosper by turning what might have been an employee into self-employed. The reason for this being that self-employment did not mandate a minimum wage and did not require paying in for National Insurance. The report concluded with,“[This] is not a capitalist system delivering its promise”.

In the interim before we can get a more compassionate government, the only economic justice workers are going to get is the one they get for themselves. While I’m not yet advocating the wholesale seizing of the means of pint and coffee production by UK baristas and bartenders, there needs to be greater awareness among hospitality workers of their rights and their power to demand better conditions.

*Alex is not the real name of the McDonalds worker, who wished to remain anonymous