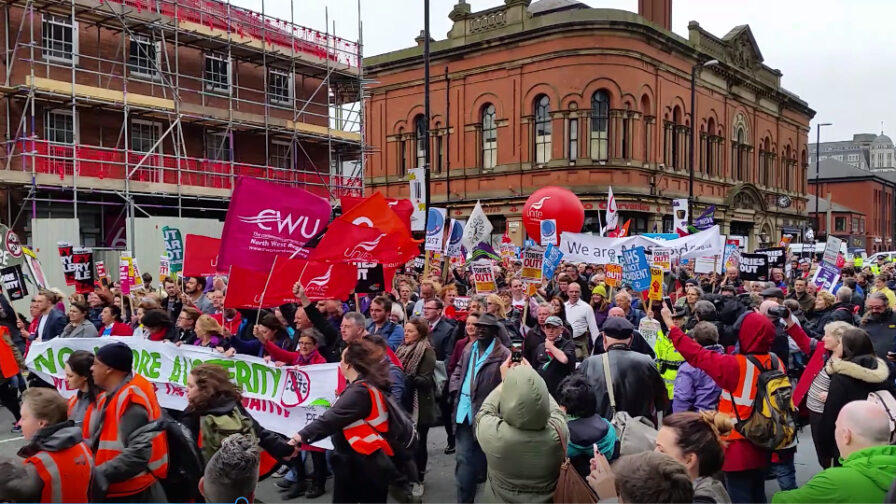 The streets of central Manchester filled with 50,000 people opposed to Tory government policies, The Peoples Assembly estimates. The national demonstration, on the 1 October, drew people from across the country including, trade unionists, anti-frackers, refugees and campaigners supporting the multitude of causes the government continues to ignore. All were determined to let the Conservative Party Conference 2017 goers know that they wanted change – now!

Protestors gathered at the Castlefield Bowl and listened to speakers criticising the Tory government’s record in office. The protest march then set of from Liverpool Rd with members of Disabled People Against Cuts (DPAC), in wheelchairs, in the vanguard. The enthusiastic marchers chanted, sang and drummed their way through streets cordoned by the huge police presence drafted in to protect the Tory conference. As the march passed the Manchester Conference Centre, where the Tories were gathered, the police helicopter could be seen and heard overhead, and the number of police lining the streets increased

The marchers gathered in Piccadilly Gardens with no incidents occurring along the way. Afzal Khan, MP for Manchester Gorton, spoke to the crowds from the plinth beneath the statue of Queen Victoria. A union leader spoke of the importance of unions in seeking justice, and exhorted the crowd to “join unions”.

The day turned sour for some of the protestors later in the day when they gathered in the ‘designated protest area’, in St Peters Square, to harangue the Tories entering the heavily fortified conference area. The Salford Star reports that the police kettled the protestors in the ‘designated protest area’ and refused to let them out. DPAC members were arrested after taking their wheelchairs on to the tram lines, in protest against the police action.

Those kettled were told by the police they could only leave if they gave their personal details. The kettled protestors refused and were given exclusion notices, banning them from the town centre during the Tory conference.