Hulme community activist facing eviction for DIY to his own home 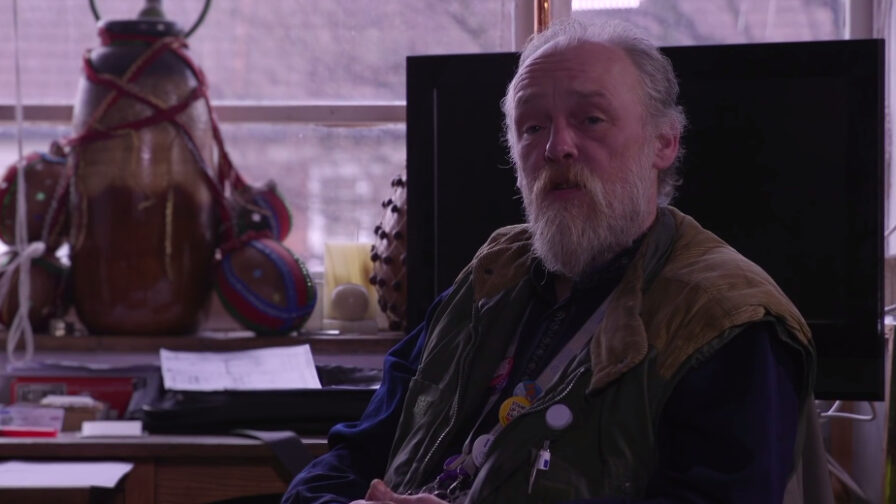 A vulnerable man living on the Bentley House Estate in Hulme since 1996 is threatened with eviction from a flat he bought in 2006, due to DIY changes he carried out to the property. After a long fought battle with the Registered Social Landlords owning the building containing the flat, he is faced with destitution based on a survey of the property which was riddled with mistakes and assumptions.

Cae Os, who prefers to use the title Captain, is a life long Mancunian born in Moss Side in 1966, and is also proud of his Irish heritage. Paying £21,500 for the 3 bedroom home under the Right to Buy scheme, he purchased it under a leasehold agreement due to the flat being in a shared block known locally as The Red Bricks which was owned by the council. Leaseholds come with covenants, or agreements between the landlord and tenant stating standards that the property must be kept to and the type of work that can be carried out to the property. However when the property was bought from the council, Cae states that it was not considered up to the council’s habitable standard.

Intent on improving his newly purchased home, Cae, who has considerable building experience, decided to do it himself. Previous to buying the flat he had carried out work to the kitchen and bathroom and he continued his DIY efforts after buying by taking out the crumbling ceiling and partition walls to the flat. In 2008, The Red Bricks freehold ownership was transferred over to the City South Manchester Housing Trust (CSMHT), along with the freeholds of much of the council housing in Manchester, at no charge to the Trust. Cae describes CSMHT as basically a council department hived off into a separate company, staffed by the same people.

The CSMHT were informed by some unknown source of changes made to the property, and sent a surveyor round to verify any changes made. Cae subsequently received a formal summons to a tribunal hearing in May 2015. At the tribunal a dilapidation list from CSMHT was produced, based on the surveyors report, detailing £60,000 worth of work needed to bring the property back into compliance with the Leasehold covenants – which Cae was expected to pay.

The dilapidation list contained a number of inaccuracies, including:

Cae thought the estimates for the work were inflated and the standards required were not fair, saying, “they were asking me to return the flat to a condition it was in before I moved in…and giving me 3 months to do the work”. He also claims some of the changes recorded in the dilapidation list were already known to CSMHT employees as they had previously been council employees when he bought the flat from the council.

The same CSMHT surveyor who compiled the dilapidation list also claimed the property was uninsurable in a following report. This assessment was inaccurate as Cae received an insurance certificate for the property from Arthur J Gallaghers Insurance Brokers stating that the flat was insured from 1 June 2017 to 31 May 2018.

Cae has been a campaigning social activist for many years and has opposed many aspects of the regeneration projects in Hulme, as well as the transfer of council properties into the control of separate housing associations, as a member of the Hulme Alliance of Tenants & Residents Association. He has been fighting gentrification of the city for 30 years, and has been active in campaigns to protect Gorton Monastery, Victoria Baths, Blue Bell Woods and Birley Fields, and was also involved in establishing the Greater Manchester Housing Action group.

Unhappy with the regeneration developments of other areas of Hulme, Cae and other residents at The Red Bricks set up a company in 1998 to enable them to submit a plan to the council for the Right to Manage The Red Brick Estate. Cae says that his involvement in this company, and the fact he had purchased his property through Right to Buy, caused a lot of tension between him and the council when The Red Bricks were transferred over to the control of CSMHT.

Cae tried to complete some of the work set out in the dilapidation list himself, but his efforts didn’t satisfy the surveyor when he called round to check them. Cae was issued with another dilapidation list which had minor changes to the first one and still the £60k price tag. To counter the claims of poor structural integrity caused by his work Cae commissioned Ian Grimley, a structural engineer, to write a report on the integrity of his flat, which concluded:

“We can categorically state that the structural integrity of the property is in no way impaired by the noted alterations.”

This report was presented to a second housing tribunal, but CSMHT opposed the inclusion of the document in the proceedings and so it was not accepted as evidence by the tribunal panel. The tribunal agreed there had been breaches of the Leasehold regulations. CSMHT were seeking to repossess the flat at a following court hearing but barrister Alex Offer felt the housing trust would make too much profit from the takeover and suggested that Cae be offered a chance to sell the flat.

Cae qualifies as a vulnerable adult at risk due to his own poor mental health, but he also qualifies under the Care Act 2014 because he is the main carer for his brother in Stockport who also has poor mental health. Vulnerable adult status means that local authorities have a safeguarding obligation to them and should inform other relevant departments or authorities of any risk the vulnerable adult is subjected to. Cae insists that CSMHT has not informed any other agencies, such as the councils homelessness services and the NHS, that he is at risk of becoming homeless.

The protracted and complicated nature of this dispute has had negative consequences for Cae’s health and his desire to further his education. Cae is currently registered as a student at Manchester Metropolitan University studying for a degree in Youth and Community Work. However due to the increasing levels of stress, exacerbating his poor mental health, caused by his housing situation he has been unable to keep up with his studies.

Cae reckons that up to £20k would be required to bring the flat up to the standards that CSMHT require, but that is £20k he cannot afford. He can’t get a loan due to a poor credit rating, and also has a £40k mortgage on the property that he would still have to pay if evicted, and says:

“CSMHT believes that shows that I am not economically viable and therefore the property should be given back to them, which I think is not very fair… They would rent it out at the going rate of around £200/week and I would have no assets and be left with a mortgage. They would make me intentionally homeless, in serious debt, all on the basis that they don’t like the decorative standard of my property that I bought off a council that gave the rest of the estate away.”

One Manchester, the housing association that CSMHT is now part of, were contacted by email to comment on this case, but reply there was none.

Cae currently has a court order saying he must vacate his home on 20 June at 4 pm, and thinks that if he doesn’t CSMHT will probably accuse him of squatting and get a subsequent order to evict him. He has applied to the Civil Court for an extension to allow him time to find another buyer, and is also pursuing a reconsideration of the original tribunal hearing; a decision on which is expected today. A petition, Save Cae’s Home, has been set up on the 38 Degrees website asking One Manchester to resolve the dispute with Cae so that he can continue to live at the property and not be thrown out onto the street.

Save Cae’s Home petition can be found by clicking here

Cae’s Facebook page, with documents relating to the case, can be found by clicking here