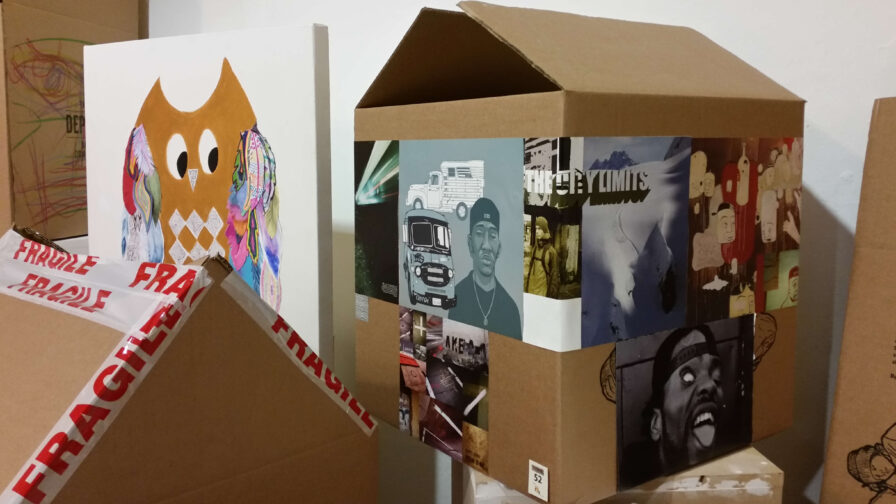 An exhibition of work from Manchester’s homeless artists was displayed at Nexus Art Cafe in the city’s Northern Quarter. The artwork was available to buy and the money raised will be used to buy vital winter provisions for the homeless.

The exhibition featured work produced in homeless centres, including The Booth Centre and The Mustard Tree, as well as the work of individual artists submitted independently. The artwork has been drawn together to form the Back Inside The Box exhibition, masterminded by ‘Urban Poet’ Ged Austin and producer Brogan Fox. 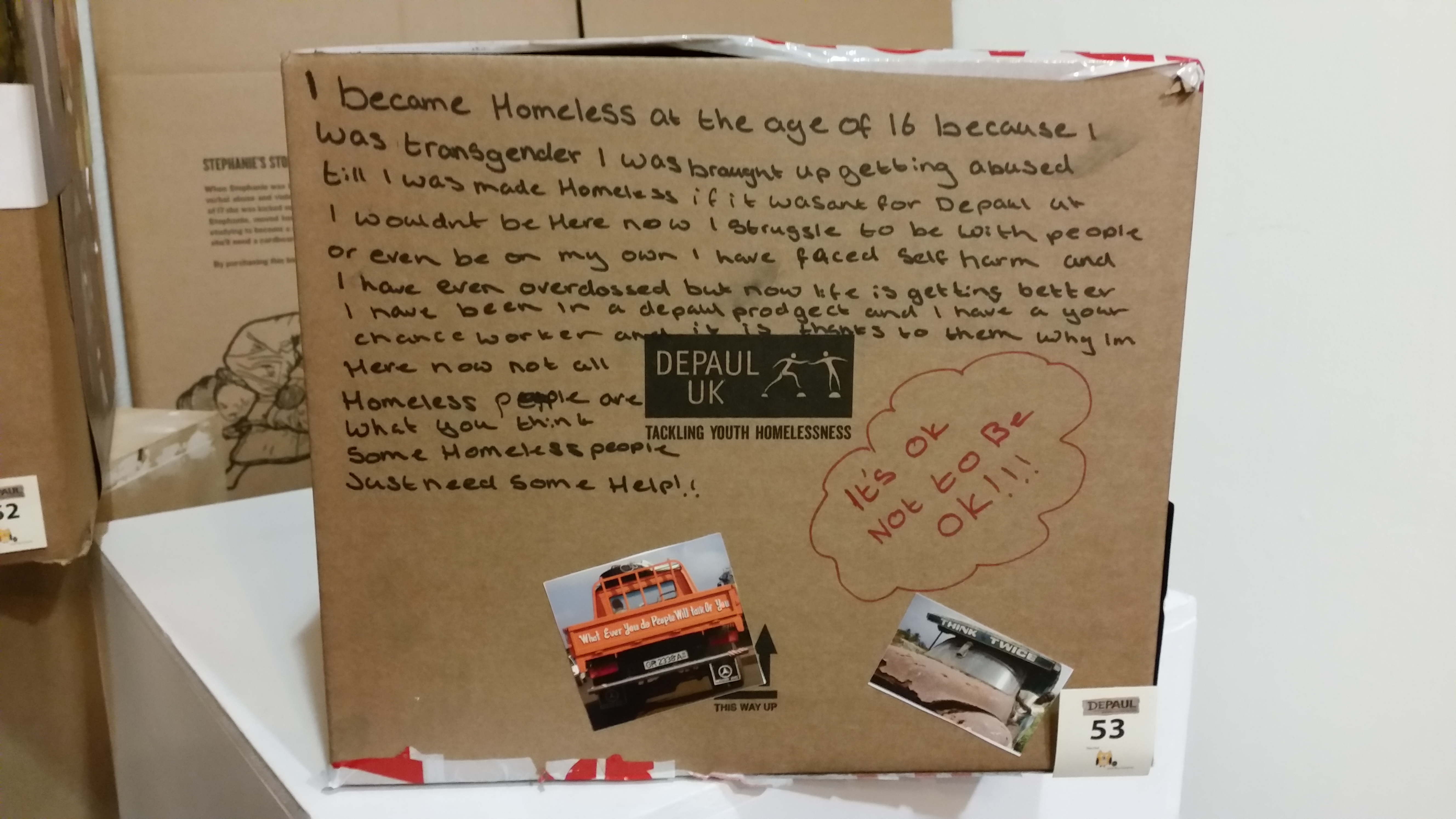 Ged, from Wythenshawe, explained how the original project, which started last year, was prompted by a series of incidents in Manchester City Centre involving homeless camps and campaigns.

We came up with the idea last year, when homeless activists were getting kicked out of tents by bailiffs, and people were being really roughly treated.

I came up with this idea of art being the way forward to show not just the problems, but real people and how they express themselves positively.”

Official figures from Manchester City Council show the dramatic worsening of Manchester’s homelessness problem in recent years. Homelessness in the city is also increasing much faster than national levels. However, these local authority statistics only tell part of the story. They only count the number of visible rough sleepers on one night a year, and ignore issues of ‘hidden homelessness’, such as those sleeping temporarily at friends or relatives’ accommodation.

Back Inside The Box is an attempt to creatively bring the people to the forefront of Manchester’s homelessness story, explains Ged. “The art is a way for the people to express who they are, as often the people can get lost in the problem.” 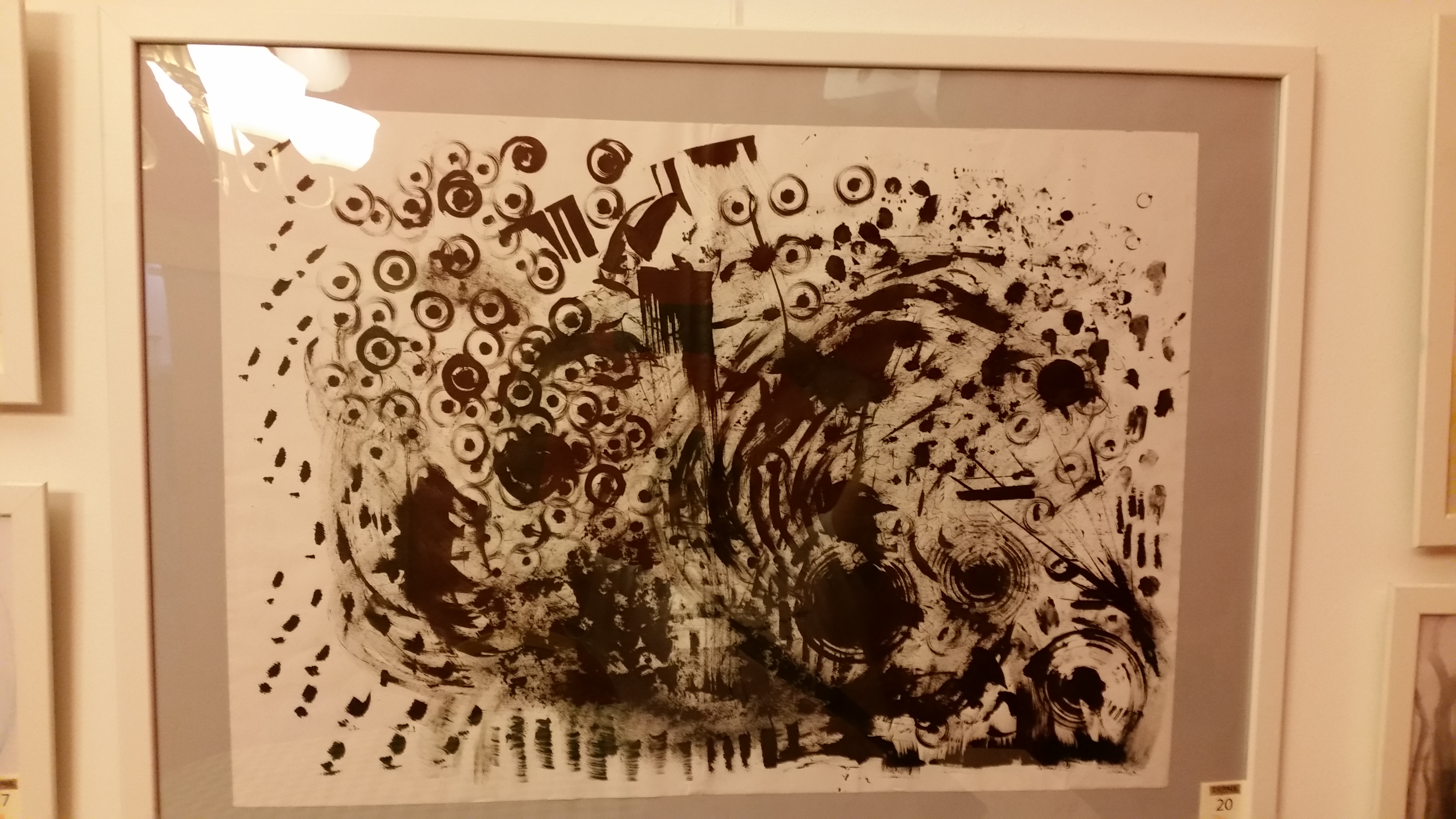 Gary, one of the artists currently exhibiting his work, explained what his practice meant to him:“My art paints a picture of me really, and the sort of person I am. The pieces I do are always of beauty or something that reminds me of my past.”

The exhibition launch party included poetry, comedy, film and music from Manchester’s buskers; including the legendary Piccadilly Rats, who were keen to show their support for Manchester’s homeless.

Running alongside Back Inside The Box in the Nexus Gallery was another exhibition of work, created by young service users of the Depaul youth homeless charity. The young artists created their work during a series of art and mindfulness sessions with The Owl and The Coconut, a local Community Interest Company. The project uses mindfulness and creativity to explore and strengthen emotional wellbeing. While the sessions focus on art as a process, rather than the end product, the group decided to share their work with an audience. 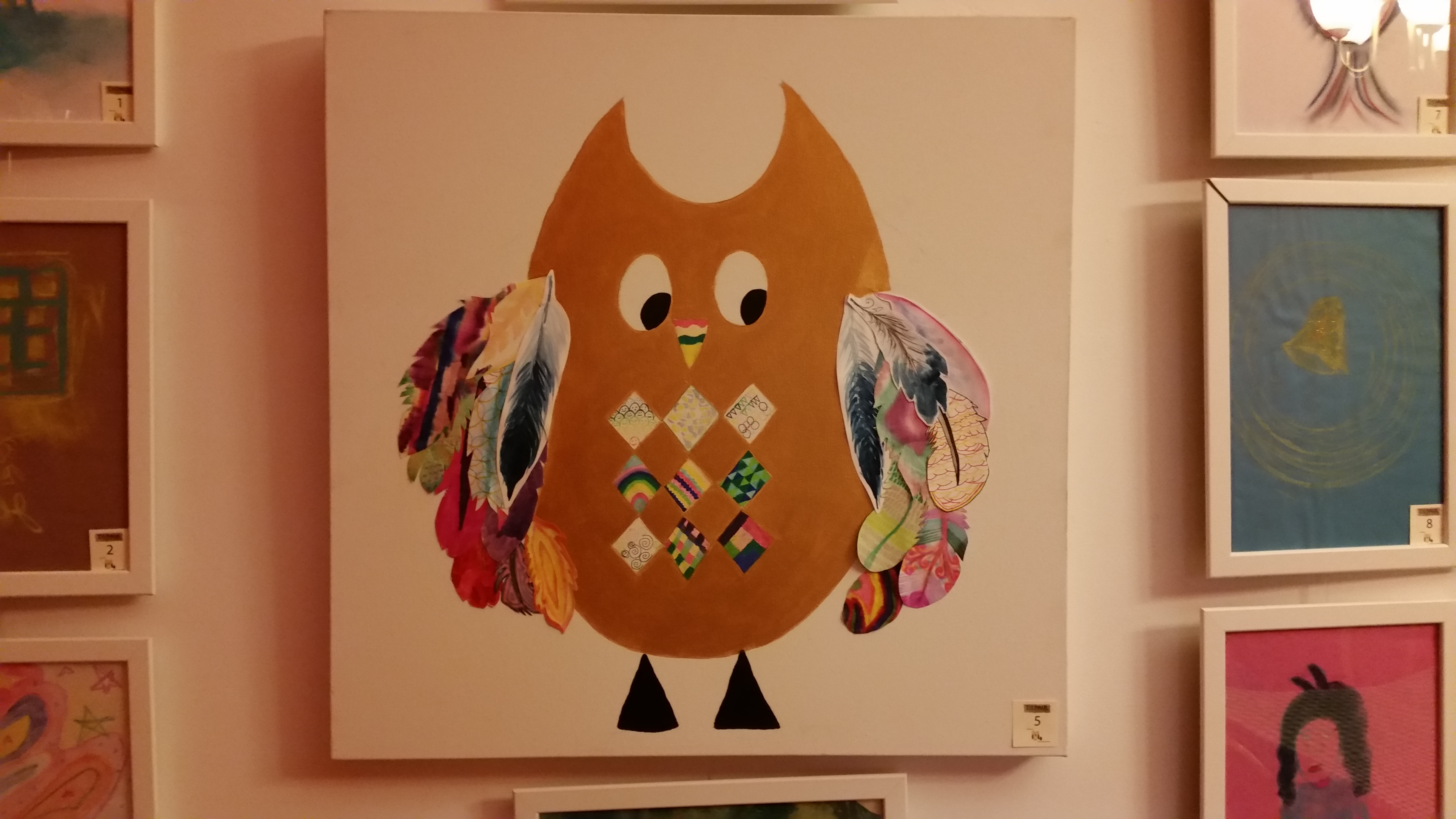 Imelda, Senior Project Worker at Depaul in Rochdale and Oldham, explained: “There was never any intention of doing an exhibition at the beginning, but when we looked back at all the amazing creations the young people had made, we chatted with them about the possibility of putting on an exhibition, and all of the young people were really happy to get involved.”

A number of the young artists attended the exhibition launch, and were impressed with the reception their artwork received. One artist had this to say:

It’s so unexpected – people actually like our artwork. My first thought when we were asked to show our work was, ‘What person has time to see my work?’ So it’s amazing to see that they really care.”

Visitors to the exhibition can bid on the artwork by blind auction up until the closing event on the 9 November, at which successful bidders can collect their pieces. All proceeds from the Depaul exhibition will go towards funding a life changing trip overseas for the young people involved. 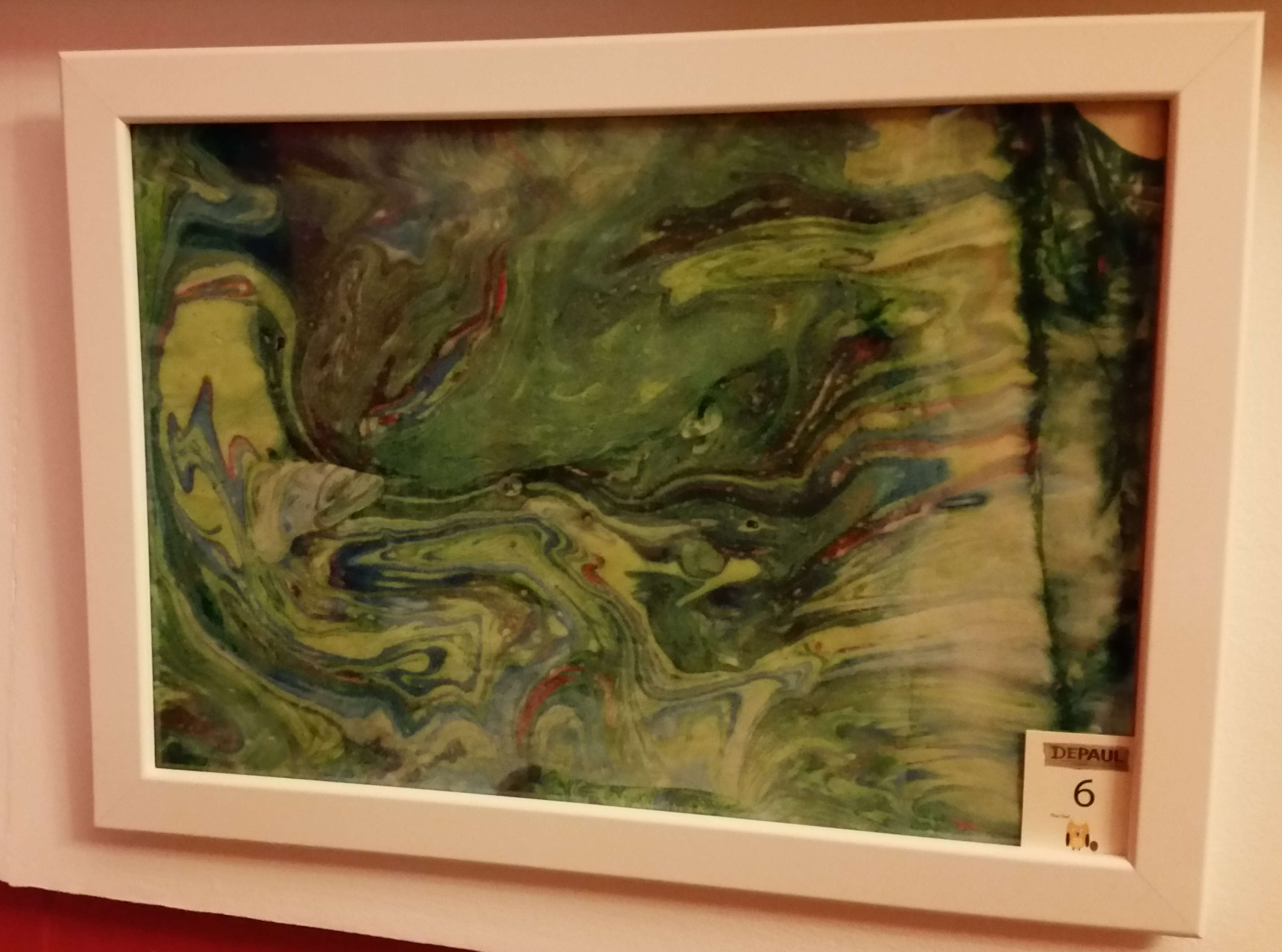 The Back Inside The Box exhibition are also auctioning their work, with the proceeds to be split between the individual artists and a fund for vital winter provisions for Manchester’s homeless. Their closing event  takes place on October 22.

Part of the reasoning behind this coming together of Manchester’s homeless projects is to build and strengthen the networks of individuals and organisations alike.

It’s about all the connections that are made socially – people make friends out of it and local projects can link in together rather than just putting on their own exhibitions – they can all come together as one.” Explained Ged.

The event organisers hope that others will be encouraged to put on similar events and that the art exhibited can play a role in the ongoing fight against homelessness, both in Manchester and on a national stage.