The wrong kind of homeless: meet the teenagers crowdfunding for a place to call their own 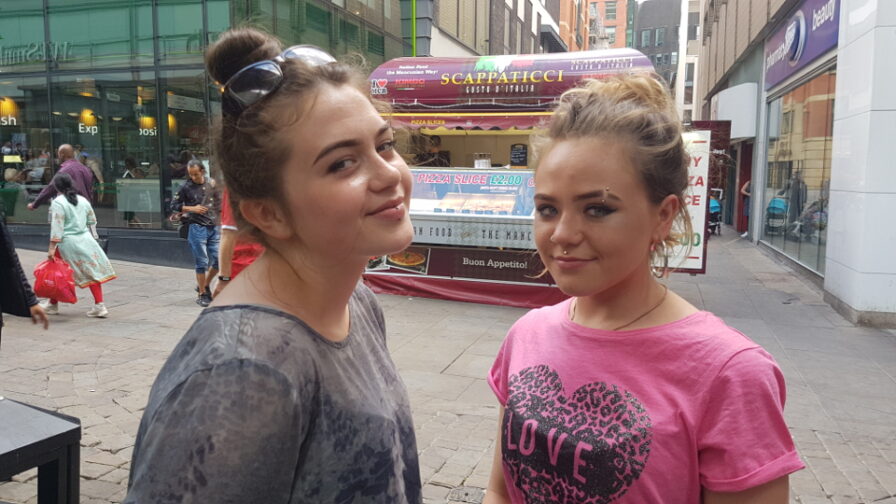 Homelessness is something we’ve grown reluctantly accustomed to in Manchester over recent years. But when somebody says the word ‘homeless’, what is the image that springs to mind? Often it’s a ragged, single, middle-aged, white man with a beard, sleeping on the street.

Caitlin and Shelby don’t fit this stereotype. Walking past them on Market Street, laughing with their mates, you wouldn’t bat an eyelid – just kids having fun. But the reality is that these teenagers don’t have any physical place to call home, just the network of friends they have built during their time on the street.

Shelby has recently turned 18. Like many other homeless youths she did a lot of her growing up in social care, and throughout her time in care was moved around to five different homes across Greater Manchester. She struggled in school but made it to college where she studied music, developing her passion for singing. Shortly after her 18th birthday she was told that she would have to declare herself homeless. Since then she has been surviving using her musical talents by busking in Manchester city centre as she has no other income.

Shelby’s story is unfortunately not a rare one, with one in five care leavers ending up homeless within two years.  “This is a very common 18th birthday present for care leavers,” explains Debbie Blanshard, a volunteer and housing activist for Greater Manchester Housing Action.

Debbie met Caitlin last year at the Old Cornerhouse Squat, a project which provided a free community arts festival and accommodation for a number of homeless people until their eviction last August.

Unlike Shelby’s shock birthday present, the transition to homelessness was more gradual for 19 year old Caitlin:

“I became homeless because I used to work, got fired and I couldn’t pay my way anymore. [Me and my Mum] just didn’t get along anymore so I just got kicked out. My boyfriend at the time, he was homeless and I joined him on the street. I kind of fell into it all, and now I’m here.”

Caitlin has held several jobs including working at McDonald’s, in a call centre and as a nursery nurse for which she trained in Health and Social Care at college. Caitlin and Shelby are a classic case of ‘hidden homelessness’, spending most of their time either sofa surfing or outside on the streets on Manchester, hidden in plain sight, with nowhere to settle. Caitlin explains:

Shelby describes the constant moving as a safety tactic, to avoid the vulnerability that comes with being obviously homeless.

“Some nights I just walk around town and that, because you don’t want to settle in one place because it’s dangerous, so you’d rather just walk around in big numbers. To make it look more like what we would normally do. We try to make it as normal as possible.”

The wrong kind of homeless

Debbie argues that part of the reason why housing and homeless services are failing young people is because of the perceptions of homelessness which services are built upon, and the practice of turning away homeless people seeking help if they do not tick certain boxes. Debbie says:

“In our heavily rationed and gate kept homeless system, to meet criteria for services, charities, and rough sleeper funding, you have to be seen by outreach teams, lying down, visibly street sleeping.

“Young people don’t do homelessness like that. They are hidden homeless and they’re walking around and they just look like students. I’ve been surrounded by homeless people, and they’re all chilling, and the outreach teams walk straight past them, assuming that they’re students coming back from a rave.”

Then there is the help they are offered, which Debbie describes as “horrifically violent, abusive adult hostels” that take both 18 year old care leavers and 50 year old released offenders, leading to young people running away from the hostels.

“The rough sleeper initiative is 500 one bed flats, with no group option, so it’s useless to most young people who want and need to live with other young people. We let students and families live together, but the homeless system splits and isolates them.”

When homeless young people refuse to be split up, they are classed as ‘intentionally homeless’ or ‘failed to cooperate’, and the case is closed. Debbie describes this process as an exclusionary “tactic, weaponised against young people”.

“Almost all the young people I see are out there with that judgment stamped on them. It really is the main reason they are out there. They were set up – offered the crap, unsuitable, dangerous or useless [accommodation] then comes the predictable ‘you’re not engaging’ stamp.”

Debbie cites the effect of the Homelessness Reduction Bill in Wales, which places a duty on local authorities to try and prevent or relieve homelessness for those without a home, and is now in effect in England.

“It made it worse for young people in Wales. How can you prove you’re not ‘not co-operating’? …You can’t!”

A study published last year posited that “the co-operation duty is possibly being used unlawfully” in Wales, raising questions about its use here in England too.

With support from Debbie, Shelby and Caitlin have attempted to seek help with getting together a deposit for a shared place, from Manchester’s homeless service, Big Change, but have been unsuccessful. Debbie states that in her experience, Big Change have never offered funds for deposits or rent to groups of young people that are not related. Debbie argues that the focus on offering support to individuals and families amounts to covert discrimination against young people who simply would not cope on their own in a one bed flat.

“The thing that keeps you from being homeless is other people. They never get the chance to make those links. Because they’re constantly moving, isolated and the system treats them like an individual on their own. But your kids are never an individual, they’re part of a tribe. if you break those links you leave them homeless.”

Big Change were contacted on this issue, but there was no reply.

Debbie explains that Caitlin and Shelby are just two cases of many of young people failed by Manchester’s housing system, saying there are, “hundreds, you just don’t see them. There are over three hundred homeless young people registered at Lifeshare.”

But it is more than just ignorance around youth homelessness that is the problem, Research conducted by The Meteor this year found that 99% of Manchester rooms to rent were either unaffordable or unavailable to young people claiming welfare, illustrating the massive obstacles those like Shelby and Caitlin face to secure a stable home. Debbie says this is systematic discrimination:

Debbie explains the risks she has personally seen young people take just to secure a roof over their heads, saying she knows young people who are:

“Selling drugs on the dark web to get housing deposits, I know young people who are escorting, shoplifting, doing everything you can possibly think of to get money for housing. It shouldn’t be like that. They should just be able to access housing like anybody else.”

Hidden but not silent

Since becoming homeless, Shelby and Caitlin have refused to stay silent and accept the situation they have been put in, instead taking a number of actions to highlight their own situation and the wider issue. They staged a chalk demo outside the Chartered Institute of Housing conference at Manchester Central to raise awareness about hidden homelessness, and have met with David Walker, the Bishop of Manchester and John Healey, shadow Secretary of State for Housing. They have also been taking part in a BBC documentary with Stacey Dooley, looking at youth homelessness.

“These girls are fighters” says Debbie.

The two teenagers are now crowdfunding for a deposit for a place of their own, appealing to the kindness of strangers to give them a chance of a secure home together, and to help other young people in similar situations. As Caitlin puts it, “we’re not just doing this for us, we’re doing it for all of the young people that are homeless.”

Debbie is supporting them in raising funds and looking for a house. “I need property in M8 or M9. I need a landlord willing to take young people on housing benefit, and I need £1200”.

“I promise you every penny will go on the tenancies. Every tenancy agreement will be uploaded online for the public to see. Not a penny on offices, pension fund, nothing. No staff. Just volunteers and the young people.”

I ask Shelby and Caitlin what they would be doing if they had their own place now.

Shelby said: “First of all, as soon as we got the accommodation, me and Cat would decorate it, make it proper nice, and just spend all the time doing that really. Then from there just go get a job. I want a home studio so I can focus on my music and do all that, and just be secure and have our own space.”

To donate to Shelby and Caitlin’s fundraiser page – click here