Will Hulme Hippodrome be saved from the wrecking ball to become a creative community space? 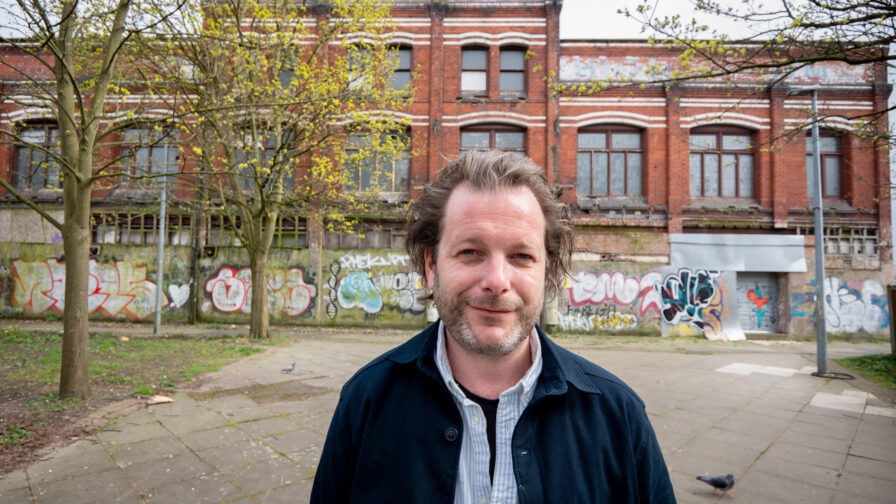 Manchester’s cultural venues face an uncertain future as the relentless march of new towering apartment and office blocks progresses unabated. Developers have their eye on the Hulme Hippodrome, a venue steeped in Manchester’s illustrious musical heritage.

Gary Roberts speaks to Oli Wilson about the campaign to save the theatre.

For those seeking to view the site of the infamous 1976 Sex Pistols gig a swish five-star hotel would today welcome you in to the shell, of what was, the Free Trade Hall. The venue which also hosted, amongst others, Charles Dickens, The Hallé Orchestra, Louis Armstrong, Bob Dylan, Shirley Bassey, Lou Reed, Pink Floyd, David Bowie,T.rex and local band Buzzcocks was converted into The Radisson Edwardian in 2004 leaving only its room names to echo its past performances.

Attendees of that seminal 1976 punk rock gig included Ian Curtis, Bernard Sumner and Peter Hook who cemented their presence in Manchester musical history by forming Joy Division and then New Order, who regularly played the legendary Hacienda club. The club, which also hosted Madonna, The Smiths, the Stone Roses and Oasis is now demolished, being replaced by luxury apartments, the only homage to its iconic musical history being the retained name on the new build wall.

Manchester has a musical and cultural heritage which is world famous, and this heritage is encompassed in buildings throughout the city. Sadly, over the years many have been demolished or converted, leaving the faintest nod to their past glory.

One such building, from an earlier era, that still stands but now faces a similar fate can be found nestled in the heart of Hulme. This venue has a heritage that stretches back over a hundred years and although of modest external appearance, it has an internal splendour, albeit in desperate need of repair, which if lost would leave our city culturally diminished.

The Hulme Hippodrome first opened its doors in 1901 with the rather ornate moniker of The Grand Junction Theatre and Floral Hall. In 1905 it swapped its name with its neighbouring sister theatre becoming the Hulme Hippodrome.

This was the era of variety shows and the Hulme Hippodrome hosted amongst others Rochdale singer Gracie Fields, Wigan born singer songwriter George Formby with his Ukulele and the Manchester formed dance troupe ‘The Tiller girls’. All these acts toured the world’s most famous stages of the day.

A campaign to save this cultural gem from the developers wrecking ball was launched by the Save Hulme Hippodrome group, which aims to purchase the Grade II listed building and preserve it for the people of Manchester. Oli Wilson, a co-director of ‘Save Hulme Hippodrome Ltd’ a company set up by the campaign group to manage the project, says:

“Our aim is to save the Hulme Hippodrome to create an arts centre for the community with opportunity for local based retail outlets.”

The Hulme Hippodrome building shares the same roof with the NIAMOS cooperative which runs a Radical Arts and Cultural Centre formed by a grass roots group of artistic Mancunians from many walks of life.

Oli, who’s father Tony needs no introduction to anyone who has even briefly encountered Manchester’s musical history, runs Peacemeal Manchester, a Social Enterprise Bakery and Kitchen, currently based in the Northern Quarter, which amongst its other work regularly provides boxed meals for the homeless in Manchester.

“When I started the food charity we initially used the kitchens making thousands of meals within the NIAMOS centre and thats when I heard about and got involved with the Save Hulme Hippodrome campaign,” Oli said:

“Initially I didn’t even know that next door there was such a big unused grade two listed Victorian theatre space. There was a campaign about saving the building already in existence but the announcement of the sale of the Hippodrome for development in January 2021 really motivated everybody to take action and form the campaign group Save Hulme Hippodrome.”

After being closed and then re-opened in the late 80’s for a brief spell hosting local bands the Hulme Hippodrome was closed and the neglected building left to decline. The magnificent auditorium lying empty and silent remained largely unaltered from its heyday decorated in a spectacular rampage of gilded Rococo plasterwork.

In 2003 the Hulme Hippodrome was purchased by the Gilbert Deya Ministries church. The church finally sold the building to a London based property developer in 2021 who in turn attempted to auction the building for conversion into apartments.

It looked like the fate of this grand old building was destined to follow the way of other historic Manchester musical venues but for a community group stepping forward to save this admired cultural venue. First on Facebook as “The Friends of Hulme Hippodrome” and then as the nonprofit Save Hulme Hippodrome Ltd, the group started raising money through crowd funding in 2021.

Working with Manchester city council and the Theatres Trust, the group managed to halt the properties auction with just days to spare. The Trust describes the Hulme Hippodrome as “unlike any contemporary theatre or music hall, an iconic building of social, historical, and architectural significance”.

To the list of already disappeared venues across the city can be added The Manchester Hippodrome, a music hall which was demolished in 1935. The Heaton park bandstand, home to William Grimshaw, the world’s first superstar DJ, who played  Caruso records on his gramophone to crowds numbering tens of thousands, was levelled in 1960. Likewise The Kings Hall at Belle Vue saw rock royalty play including The Who, Jimi Hendrix, Led Zeppelin and The Rolling Stones until, despite a petition signed by 50,000, it fell victim to the developers bulldozers.

Smaller, but no less important, stepping stones in Manchester’s musical evolution have vanished including The Twisted Wheel, the legendary northern soul venue on Whitworth street, which was demolished for a hotel in 2013, again despite a public outcry. The International 2, base for The Stone Roses, was demolished for a gated apartment building complex in 1992. The Roadhouse on Newton Street, where Elbow members both worked and performed, closed in 2015 and is still boarded up but rumoured to be earmarked for offices or apartments. Even the Boardwalk, where Liam and Noel enjoyed their first gig following in the footsteps of the Happy Mondays, has been converted into office space.

The currently threatened Hulme Hippodrome was the launching pad for acts such as Benny Hill and hosted the show Memories of Jolson that in 1953 gave, the then sixteen year old, Shirley Bassey her first stage job. The venue also regularly hosted established touring acts, such as the African American jazz musicians Harry Scott and Eddie Whaley together with Will Garland, perhaps the most significant Black practitioner in British musical theatre of his era.

However, by the time of the second world war and in the following post war years the Hippodrome, facing commercial pressure from local cinemas, drifted into more risky productions with burlesque dancers and striptease. The venue though still continued with theatre in the post war era and Coronation Stars Pat Phoenix (Elsie Tanner), Betty Driver (Betty Turpin) and Doris Speed (Annie Walker) appeared there in dramas before finding fame on Granada TV’s famous street.

In 1962, like so many buildings of its ilk, the Hulme Hippodrome was converted into a Mecca bingo venue. By 1986 the doors on this great building had finally closed and apart from some gigs in the late 1980’s by local bands The Wild Panzis, The Slum Turkeys, Tunnel Frenzies and Metal Monkey Machine, who predated the Madchester scene, the stage remained quiet.

Community space ‘that can change their lives’

Oli emphasises that the campaign is not about saving the building as a Manchester heirloom, it is primarily aimed at putting it to good use for the local community.

“I believe there is an important differentiation between saving spaces for the community and saving historical buildings for the sake of heritage. I want to save spaces for people because people need spaces to meet up and share ideas that can change their lives.

“We want to look forward but in doing so bring back affordable and accessible entertainment which once existed in this building. This means accessibility not only for the community but for the artists who perform so there is some continuity with the past history of the Hippodrome.”

Expressing his concern over the dominant development agenda in the city Oli said: “If the current wave of development continues Manchester will become sterile with loads of places for people to live but no space for people to do anything else. Many young people are searching for places to inspire them within their communities but are increasingly having nowhere to go.

“Thats why we need places like the Hippodrome to be saved and reinvented for the community. In its heyday they used to put on multiple shows in a day, with family shows in the daytime and adults at night. All were affordable for the community and provided accessible working-class entertainment.

“This supports a healthy creative ecosystem which I think today will struggle to find its feet as spaces like rehearsal rooms are just being driven out of the city centre. Creative people need venues and spaces to learn their trade either as startup bands or creative theatre groups.”

Disturbed at the pace of development and the loss of cultural venues in the city Oli urges Mancunium’s to oppose these developments, saying:

“We still have the opportunity, we have 2.9 million Mancunians who live in Manchester, we still have enough time to fight back against the spread of faceless development. We have enough spaces left like the Hippodrome to hold on to and rebuild a creative cultural community and prevent the city becoming completely bland.”

Oli, who is also involved with the Greater Manchester Music Commission chaired by Andy Burnham, feels that developers need to be mandated to take in to account public space and venues when submitting applications in order to preserve the creative community. He remains optimistic for Manchester as he has faith in the people of the city, and asks:

“Why would you let this vibrant city become faceless? If you are going to knock an old building down then don’t just build endless apartments put something great for the community in its place.

“The Hulme Hippodrome gives us one of the last chances in this area to keep something going for the community beyond an instagramable facade from a London based restaurant chain or an apartment block.”

Music of all varieties has and still does play such a significant role in the history of Manchester, with the remaining venues representing a potential breeding ground for a wide range of artists and talent. From Music Hall to Madchester, the city’s musical reverberations have long been felt around the world.

One only has to witness the steady arrival of Smiths devotees, posing for photographs on the door of Salfords lads club to realise that Manchester’s musical past has worldwide appeal, that endures.

The loss of Manchester’s cultural landmarks, to make way for more new build blocks or conversion to apartments, without cultural sensitivity, threatens to destroy the supportive lattice these creative spaces provide to the city. If this creative vibe is to be kept alive it will need a combined effort from the community, the local authorities and commercial development to allow the music to continue reverberating from these iconic venues.