‘We are facing extinction, unless we take action’, Extinction Rebellion hits Manchester 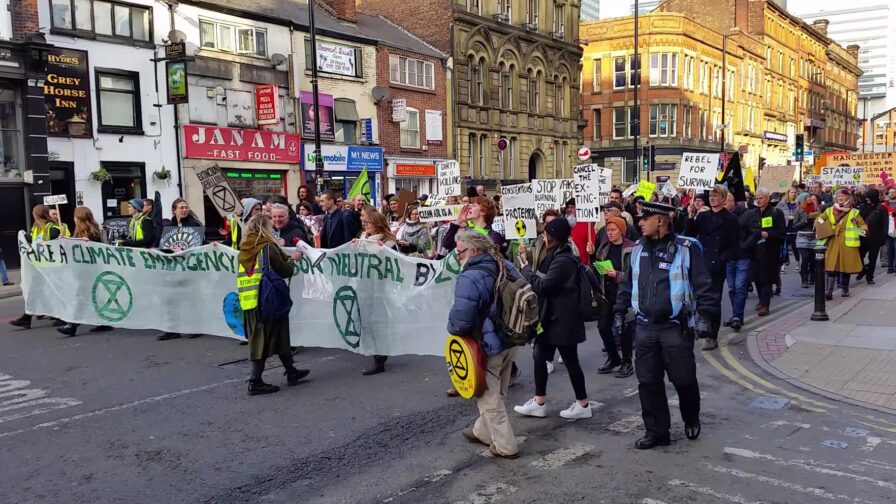 Citizens tired of the predictable and repeated failures of government to take action to reduce climate change, and protect the environment, took to the streets of Manchester on Saturday in an attempt to force the governments hand.

Extinction Rebellion campaigners marched through the streets of Manchester, calling for “climate justice”, with placards and flags bearing the Extinction rebellion logo of an hour glass within the circle of the earth, representing the limited time we have left to protect life on Earth. The rebels tactics, as spelled out on flyers handed out during the day, is non-violent disruption in order to prevent the breakdown of humanity’s life support system.

Claire Stocks described how her research into environmental issues led to her joining the rebellion. Before the march started she said:

“I am not sure people realise just how bad it is, and how much destruction and devastation we are facing and how much we are doing to the planet. I honestly believe if people realised how bad it is they would all be joining us here to protest and demand the government start taking action against what is the defining issue of our time. I know our politicians are busy with Brexit and the day to day, but this is an existential threat that we are facing.”

“We are facing a possible extinction and the destruction of the planet as a habitable place, unless we take action”

Loss of biodiversity and increasing air pollution, particularly in Manchester were also described by Stocks as important issues for herself and the campaign.

Hundreds marched from Piccadilly Gardens to Deansgate, which was bustling with Christmas shoppers, where sit down protests were carried out in the road bringing traffic to a halt. A prepared statement was read out in sections to the growing crowds:

“This is our darkest hour. Humanity finds itself embroiled in an event unprecedented in its history of which, unless immediately addressed, will catapult us further into destruction.

“We hold dear this nation, its peoples and our eco systems and the future of generations to come. The science is clear. We are in the sixth mass extinction and we will face catastrophe if we do not act swiftly and robustly. Biodiversity is being annihilated, our seas are poisoned, acidic and rising. Flooding and desertification will render vast tracts of land uninhabitable and lead to mass migration… We, in alignment of our consciousness and our reasoning, declare ourselves in rebellion against our Government.

“The wilful complicity displayed by our Government has shattered meaningful democracy and cast aside the common interest in favour of short term gain. When government and the law fail to provide any assurance of adequate protection as well as security for people’s wellbeing and the nation’s future it becomes the right of citizens to seek redress in order to restore democracy and to secure the solutions needed to avert catastrophe and protect the future…”

From Deansgate the march moved onto St Peters Square, and a smaller group carried on down Oxford Rd to the corner of Portland St, where they sat in the road to block it. Eight of the rebels were arrested, for blocking a public highway, after an hour long negotiation with a police liaison team failed to move them.

The protest in Manchester took place at the same time as the second large action by the campaign in London. An estimated 1,000 or more protestors gathered in the capital with a smaller number of them blocking roads around parliament square. The action in the capital on the previous Saturday saw rebellion campaigners blocking five major bridges in central London. Extinction Rebellion promise there are more actions to come across the UK.