Ways Forward 2022: Can we co-operate our way to climate justice? 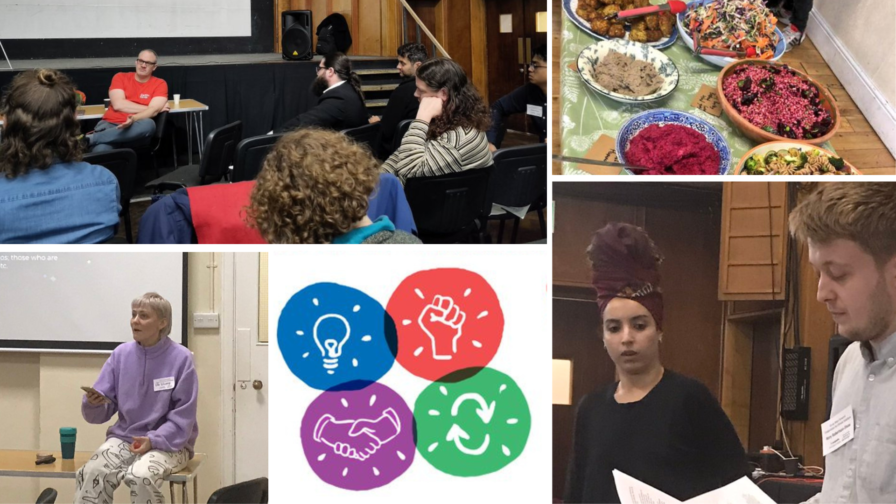 The Ways Forward Conference 2022 in Manchester offered workshop discussions, panel sessions and plenaries around the role of co-ops in the current global climate crisis, including local action from energy to development.

The climate crisis impacts on social issues at both national and local levels, from food to security to migration. Meanwhile, co-operatives are said to have “long fostered inclusive and sustainable approaches to economic and social development at the local level” – Ban Ki Moon.

It was towards this aim that co-operators gathered at Methodist Central Hall in Manchester’s Northern Quarter for a two-day conference named ‘Ways Forward, Co-operating for Climate Solutions.’

Attendees united to discuss how to build effective alliances across communities to address the need for change. The event, now in its eighth year, was organised by the co-op development organisation, Platform 6, and discussed why climate justice is important for the co-op movement and how co-ops can be seen as relevant to the climate movement.

The first day opened with a plenary discussing how to bring the climate and co-op movements together.

Chris Saltmarsh, co-founder of Labour for a Green New Deal and author of ‘Burnt: Fighting for Climate Justice’, opened the conversation by discussing the need for economic transformation rather than “tinkering at the edges”.

“We need to have a massive expansion of public ownership throughout our economy which means nationalising key strategic sectors, bringing them into municipal ownership.” Within these key sectors such as energy and water, co-ops run the risk of undermining the nationalisation agenda, argued Saltmarsh.

Attendees also heard from Green Party councillor and co-operator Jo Bird, who proposed a Green Co-operators Network, arguing that no other parties were offering a route towards climate justice alongside co-operatives.

Majdouline El Hichou, educationalist and activist from Solidarity Economy Association, also spoke during the opening plenary and ran one of the event’s workshops. El Hichou encouraged the audience to look beyond party political debate and instead emphasised growing a solidarity economy for the UK and beyond.

“It’s not the big scale corporations, or states, or the capitalist system that is making change, it is the small-scale indigenous movements across the world that have been making a big change,” she said, adding that we should be looking at what solutions are already being proposed outside formal structures and how we can build from there.

Throughout the rest of the day, workshops focused on co-operative solutions to the combined climate and cost-of-living crises.

Jonathan Atkinson, from People Powered Retrofit based in Manchester, shared details of the not-for-profit service, which offers independent advice and support to help householders plan, procure and deliver retrofit projects.

“There is a clear inequality in terms of the distribution of power and resources and privilege within the society,” said Atkinson, adding that the people-centred nature of co-ops means that solutions they come up with are more likely to be adopted quickly and effectively.

“For the energy transition, we need open and available technologies that everyone can use, and as many people as possible to contribute to as well,” added Atkinson.

“What we’re trying to do with public commons partnerships is to create a space, when we design these institutions, which protects democratic decision-making from the pressures of finance,” said Milburn.

Milburn is involved in supporting a potential PCP in Hulme around the Block the Block campaign, involving a group of Hulme residents fighting to stop a block of student flats being built on the site of the old Gamecock pub. The community is now developing a plan for alternative uses of that asset, and how that could fit into trying to get democratic control over the estate.

The conference also hosted a number of conversations around diversity and inclusivity, including a session from Steve Graby on disabled people’s experiences in co-operatives, a discussion on class inclusivity in the climate justice movement from Tipping Point UK, and the beginning of a conversation around how to build an anti-racist worker co-operative sector which “welcomes difference, listens to the needs of all co-operatives [and] rejoices in the experience, skills and knowledge of all,” hosted by Co-operative Skills Consultant Kate Whittle.

The Ways Forward conference showcased many impactful co-operative organisations from around the UK, hoping to inspire and change the current climate justice conversation which is often pushed aside. The conference’s final session reflected on the two days, including the strategy of inviting a wider range of perspectives than usual. An event report will be produced and circulated by the organisers and there is likely to be another Ways Forward conference next year – those looking for co-operative ways forward are encouraged to attend.

Labour for a Green New Deal