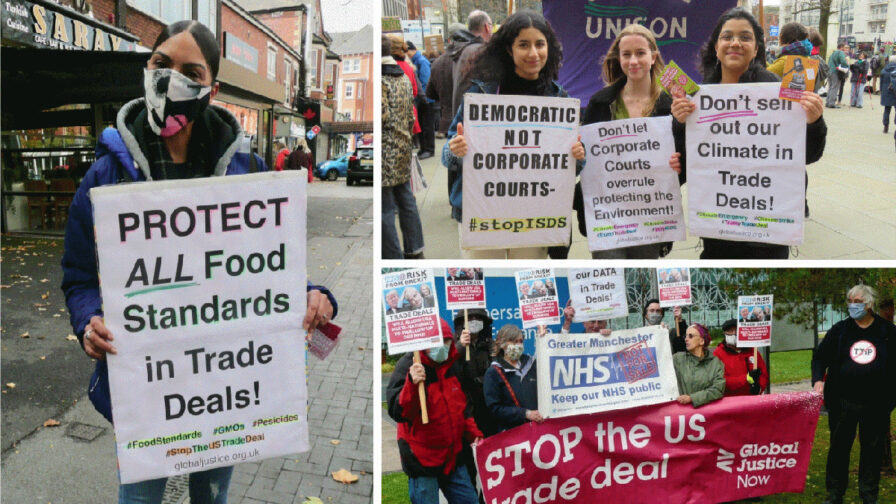 Biden may be set to replace Trump as US president, but the threat to Britain’s food and safety standards from a new US trade deal remains. Regulations and standards set while we were in the EU will be on the table at any new trade negotiations with the US

Mancunian trade justice activists fear that a President Biden-led US government could be even more of a threat to British standards than Trump’s administration. Members of Global Justice Now and other organisations have carried out many demonstrations highlighting the possible degradation to UK standards that a new US trade deal could bring. Their latest protests in October were held in Chorlton, the city centre and outside Manchester Royal Infirmary calling for a stop to the US trade deal.

The current focus of the media is on the Brexit trade deal negotiations with the EU and these are incredibly important as UK trade with the EU in 2018 came to £659.5bn, which is 49% of the total trade for that year. But when considering single countries the US is our largest trading partner, with a value of £201.6bn (15%) in 2018.

Modern trade deals, often favouring powerful corporations, determine many aspects of life.  Tariff levels set within these deals are often accompanied by clauses dismantling regulations and safeguards. Weaker economies can be coerced into accepting them, and the UK on its own outside Europe provides a significantly weaker economy for the US to bargain against. A new US trade deal signed after we have fully left Europe on the 1 January 2021, will threaten food and safety standards set while we were within Europe.

Three years ago The Meteor covered protests against Government secrecy over its proposed trade deal with Trump.  A few players have changed, Liz Truss for Liam Fox, Boris Johnson for Theresa May, but little else has.

The government claimed it would keep EU food and animal welfare standards, preventing American chlorinated chicken from underpricing UK produced poultry which would have to be reared with current EU standards and practices. Food protestors however pointed to continued lobbying by US agri-businesses, sometimes through soft-spoken free-marketeers like Shankar Singham of the Institute of Economic Affairs.

The IEA is a right-wing think tank that was given a formal warning by the Charity commission for producing a Brexit Report that was “not sufficiently balanced or neutral”, and that for an educational charity “amounted to misconduct and mismanagement on the part of the trustees”. The IEA is also very secretive about who funds its work and does not, declare amounts given or the names of funders in its annual accounts or on its website.

This PR blitz for lax standards to be allowed in a UK – US trade deal led to actions in Manchester supermarkets earlier this year where they were targeted with spoof “Trump in your trolley” chlorinated chicken and arsenic rice boxes. Since then the situation has crystalised.  Whilst the Government has bowed to pressure, the threats have been seen to become more complicated and acute.

Pressure across the country, not least from the National Farmers Union, celebrity chefs, and the Daily Mail has raised awareness of the spectre of British farmers being undercut.  Campaigners  have used video of Michael Gove, when he was Environment, Food and Rural Affairs Secretary, repeatedly giving explicit assurances to Radio 4’s Today programme in 2017, “We are not going to dilute our high animal welfare standards, or our high environmental standards, in pursuit of any trade deal”.

Nick Ferrari on LBC in January 2020 challenged “So chlorinated chicken will not be finding its way into the United Kingdom?”  Gove answered: “Nope!”

Juxtaposed to this US Secretary of State Mike Pompeo insisted that chlorinated chicken must be on the menu in any trade deal discussed with the UK.

Then in June Gove’s successor at DEFRA, George Eustice, floated the idea of a dual tariff system; which amounted to chlorinated chicken being let into the country with consumer choice being relied on to reject offensive products. The lower US labelling standards could well inhibit discernment of the standards used to produce these food products.

But then came pushback from chair of the Senate Committee on Finance, Chuck Grassley, an Iowa farmer.  He tweets against electric cars as bad for farmers growing biofuels.

In July he encouraged the US government to push for GMOs (genetically modified organisms) to be allowed into Britain.

Many have been concerned the government’s opposing amendments to the Agriculture Bill which would explicitly preclude GMOs.   These amendments were supported by Conservative MPs from farming constituencies.

Tis stirred suspicions so Global Justice Manchester have been out in Chorlton raising awareness of the deal and finding support.

Faced with their promises on food standards being distrusted, the government has conceded to increased scrutiny and proposed an amendment to the agriculture bill to put the newly established trade and agriculture commission (TAC) on a longer-term footing.

However the failure to explicitly safeguard with law means regulations can be changed without parliamentary inspection and acceptance by a minister signing a Statutory Instrument, “secondary legislation” avoiding Parliamentary scrutiny.

Similarly, Mike Pompeo and the government’s protestations the NHS is “not on the table” have sounded hollow in the light of their brazen outsourcing of healthcare responsibilities under the pandemic with vast sums given to private providers of  unsatisfactory PPE and a variety of services, including test-and-trace

This led to Keep Our NHS Public, War on Want and Global Justice Manchester protesting outside the Manchester Royal Infirmary. The event was successfully streamed live to over 500 people and gained honks of support from passing traffic. Pia Feig explained the indirect threat to the NHS of selling off services with agreements insuring they could not be taken back into public ownership.

She also spoke of the danger of NHS patient records data being off-shored, potentially being sold on, raising insurance costs, and influencing employment chances and stereotypic profiling. Furthermore Chatham House has recognised the NHS could be exploited by increased pharmaceutical pricing with NICE unable to regulate, potentially costing billions.

Since then Chuck Grassley is said a UK-US trade deal “ought to involve almost anything” and the NHS would benefit from increased competition.

Grassley concedes that there could be negative consequences: “I have sympathy indirectly for Britain negotiating access to our pharmaceutical companies to your NHS, because you don’t want prices to go up again”.

Global Justice Now calculate the 50 most expensive medicines used by the NHS in primary care in 2018 would have cost £1.42bn more at US prices.

Campaigners fear fossil fuel and financial lobbying will erode Biden’s stated commitment to tackling climate change.  Pressure to incorporate “corporate courts” and Investor State Dispute Settlement (ISDS), which sit apart from the standard judicial system and have limited transparency and accountability, could allow bullying and blackmail of governments’ anti-climate change regulation and national laws to be overridden.  The reviving of fracking and coal mining is also a possibility under ISDS and Manchester’s anti-nuclear and climate stance could be challenged if it was seen to restrict the “free market” and prevent corporations making money.

he trade related threat to climate change action remains- hence the interaction with School Strikers, Extinction Rebellion, and older climate activism groups continues to not only have validity in its own right, it provides common ground leading to wider consideration of economic justice.

The jury is out until such time as Biden’s position is clear.  It’s possible a deal could be pushed through before Biden’s January inauguration, after the UK’s transition period ends. The Daily Mail has reported Biden may scrap the offensive food requirement to lure us into a rejuvenated Pacific Ocean based Comprehensive and Progressive Agreement for Trans-Pacific Partnership (CPTPP)

However, Biden has stated if the UK renegues on the Good Friday Irish peace deal, the trade talks will be derailed, relegating Britain to “the back of the queue”.  Johnson needs Biden more than Biden needs Johnson, so may be eager to snatch up anything he can, painful concessions being hidden behind the pandemic.

Nick Dearden, Global Justice Now’s Director, calling on people to take this danger seriously  contends: “Biden’s victory could benefit Boris Johnson if opposition to the US trade deal now melts away…   If Boris Johnson can persuade the public those threats have gone away with Trump, it could be easier for a trade deal to get through. People shouldn’t be fooled.”

Stephen Pennells is an active meber of Global Justice Now and took part in the demonstrations in Manchester mentioned in this article.