By Guest Writer | 21 February 2019Friends of The Meteor 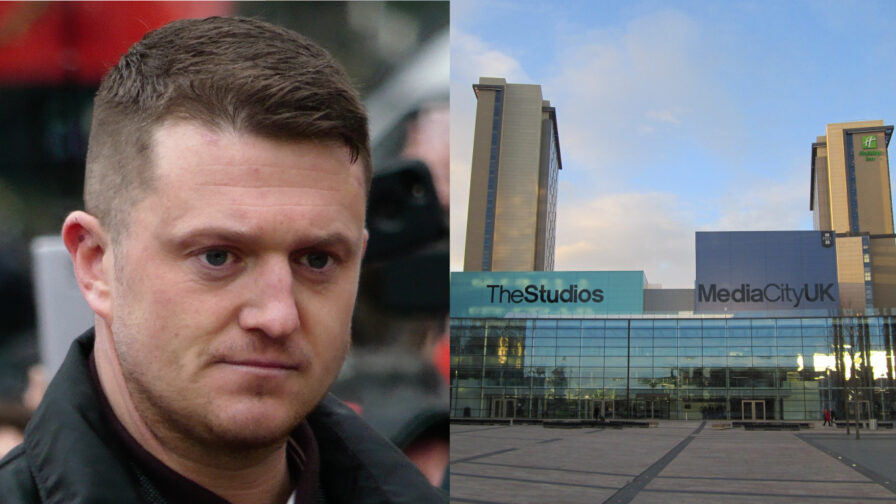 The racist graffiti on the home of a Salford family has been condemned by Unite Against Fascism (UAF), which is jointly organising the protest against far right Tommy Robinson at Media City this Saturday, 23 February.

“Worryingly, we are seeing a number of racist attacks, such as the disgraceful graffiti on this family’s Salford home” states Paul Jenkins of UAF “These attacks are part of a toxic atmosphere in which all forms of racism are being whipped up.” Also backing the protest against Robinson are a host of trade unions and Worsley and Eccles South MP Barbara Keeley.

As news broke on Monday that racist graffiti had been daubed on the family home of a ten year old boy in Salford, anti-racists condemned the attack as part of a ‘toxic atmosphere’ that is spreading, and urged people to turn out in numbers against far right Tommy Robinson when he holds his protest against the BBC this Saturday 23rd February.

“Worryingly, we are seeing a number of racist attacks, such as the disgraceful graffiti on this family’s Salford home” says Paul Jenkins, North West Regional Organiser of Unite Against Fascism (UAF) “These attacks are part of a toxic atmosphere in which all forms of racism are being whipped up. They are completely abhorrent and unacceptable.”

Robinson – real name Stephen Yaxley-Lennon – has announced that he will be holding a rally against the BBC at Media City in protest at a Panorama programme about him but Weyman Bennett, Joint National Secretary of the UAF, explains…

“Robinson regularly consorts with far right individuals like Steve Bannon who seek to divide Muslims and Jews, black and white, and often support violence to further their aims. Journalism that lifts the lid on Robinson, his funding and his violent racism is welcome.

“We should not allow the fascist Tommy Robinson to be ‘normalised'” he adds “He’s not a journalist or an ‘activist’. He is a far right thug who looks to rip up our diverse society and promote dangerous divisions within it. It is important we stand together and defend our democracy against the far right.”

The counter demonstration against Robinson is jointly organised by UAF and Stand Up To Racism and is backed by an array of trade unions, MPs, including Worsley and Eccles South MP Barbara Keeley, and Dan Hett, the brother of Martyn Hett, a victim of the attack on Manchester Arena in 2017, and co-founder of Survivors Against Terror.

‘We are asking as many as people as possible to attend the Unite Against Fascism/Stand Up to Racism protest against Tommy Robinson’s demonstration at Salford Media City, 11.00am, on Saturday 23rd February” says Paul Jenkins.

Dan Hett, Brother of a Manchester Attack victim and co-founder of Survivors Against Terror;