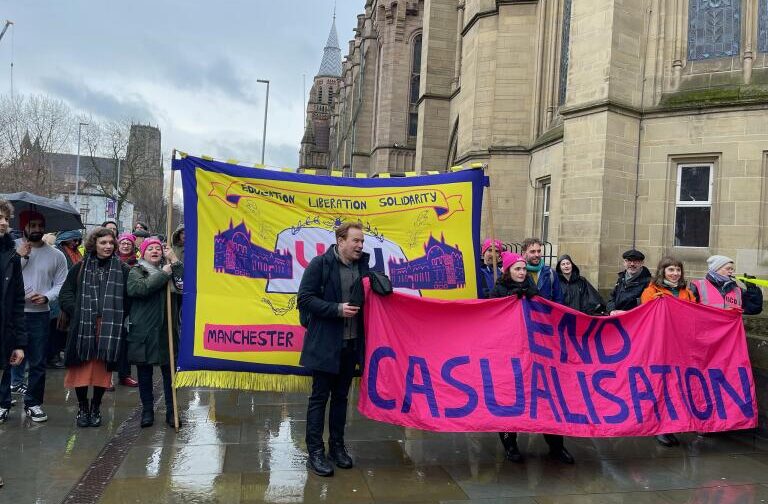 University and College Union (UCU) members voted overwhelmingly for strike action last month, to increase pay and improve conditions (81.1%) and reverse cuts to pensions (84.9%) in ‘historic’ ballot. If the dispute remains unresolved, up to 70,000 workers across 150 universities will strike over three days at the end of November.

Since the ballot result was released on 24 October, UCU branches across the country have been meeting to discuss the next steps in the negotiation process. On Friday 3 November, UCU General Secretary Jo Grady announced three days of strikes at the end of this month.

Lucy Burke, chair of the Manchester Metropolitan University branch, says the next move is to “encourage support for the hardship fund which is there to protect people, on lower points of the pay scale, through strike action.”

“It’s a big deal for people because you sacrifice a day’s pay and in some institutions people have been having 100% deductions for doing 90% of their job but not marking, and some employers have been so aggressive that they’ve taken a 100% deduction for action short of a strike.”

“We had people over the summer who had zero in their pay packet for a whole month.”

What is action short of a strike?

Actions short of a strike are disruptive strategies unions can use instead of going on strike.

Actions that UCU have balloted to undertake are:

Lucy Burke added: “The cost-of-living crisis exposes the longer-term process of workers on the ground paying the price for the extraction of profit for a minority of people at the top.”

According to data analysed by UCU, the UK university sector generated a record income of £41.1bn in 2021 with vice-chancellors earning collectively an estimated £45million.

Members are demanding a 12% pay rise after turning down an offer of 3% earlier this year. Since 2009, university employees have undergone real-terms pay cuts, currently estimated by UCU to be 25% behind inflation.

The pensions ballot follows a cut of 35% to UCU members’ guaranteed pension. Earlier this year, the Universities Superannuation Scheme (USS) released a financial report, which confirms that the cut to pensions can be returned and backdated whilst keeping USS finances in surplus.

Jo Grady, General Secretary of UCU, said members have delivered an “unprecedented” mandate for strike action. For the first time since the Trade Unions Act (2016) restricted the rights of trade unions, UCU passed the threshold to secure an aggregated ballot which means every university in the country can go on strike regardless of their individual result.

UCU’s campaign has gained support in Westminster, with 50 MPs and peers including Rebecca Long-Bailey (MP for Salford & Eccles), and Graham Stringer (MP for Blackley & Broughton) signing a letter of endorsement. It read: “we believe UCU’s demands are reasonable, realistic and affordable.” It ended by warning if their demands continue to go ignored, UCU members will be “left with no other choice” but to undertake industrial action.