Thirty Blackley households given just 7 days to find a new home, due to fire safety notice 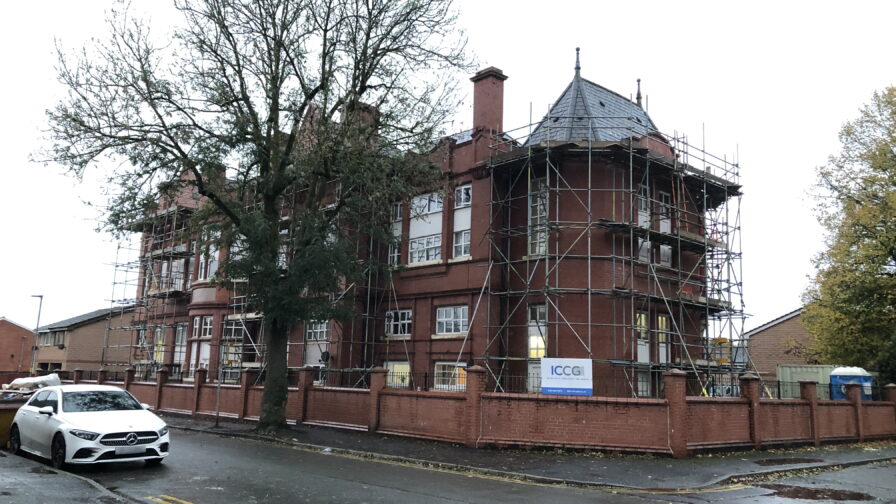 Residents of Old School Court in Blackley were given just one week to vacate their homes for fire and safety reasons.

Tenants and leaseholders of a block of flats in Blackley are distressed at having a fire safety Article 31 Prohibition Notice served on their building on Monday 25 October, by the Greater Manchester Fire and rescue Service (GMFRS), giving them just seven days to find alternative accommodation. Residents were left unsure of where they will move to and what help was available to them.

Old School Court is a former school building, built in the 19th century and converted into 36 flats in 1996. A fire occurred in a ground floor flat on 1 July, which led to GMFRS deciding the building was unsafe for people to live in.

The blaze spread to other flats, and smoke travelled throughout the building, revealing inadequate fire separation between apartments. One resident Alex (not their real name) speaking to The Meteor, who lives in a flat near where the fire started, said:

“Somebody had a fire downstairs, they had a chip pan catch fire, and it burnt through to the flat next door, and also the room below this one, it went through their bathroom floor. And the fire brigade came round, they bashed all the doors in, which they have to do to find out if there’s anybody in the flats.

“We’ve been waiting for three months or so, now, for the [new] doors to be put on. And they [the resident management company] keep saying they have to order them, and they said they were waiting for insurance, so we’ve got this now [a hasp and staple lock], and we have to have a padlock.”

Following the fire GMFRS issued the Article 31 notice, with conditions attached to ensure the residents’ safety while the building still had fire safety issues. A breach of these conditions would require GMFRS to order the building’s closure.

The prohibition notice permitted the building to be occupied only if there was a means of alerting all residents to a fire. Smoke detectors were installed in flats and communal areas, and a waking watch was provided. But this did not remedy the problems.

The resident management company, who own the building and employ the company Scanlans to manage it, decided it will not pay for the waking watch beyond 1 November, and so the safety of occupants can no longer be guaranteed, leading to the GMFRS decision that all tenants must leave the building. Alex explained their view of the situation:

“What finally made them [GMFRS] decide to close the building, there’s the fire brigade, and there’s another company that do fire checks [employed by the resident management company]. They came round and did a check that day. They come round every Monday and beep, beep, beep, they test it.

“Unbeknown to us, the fire brigade were doing a test as well. And they did an evacuation test. But we thought they were still testing [the smoke alarms]. So nobody went out. And then they sent us a letter, saying people didn’t evacuate, it’s dangerous, you know… and they told us last Monday [25 October] we all had to leave on Monday [1 November] at one o’clock.

A representative from Greater Manchester Housing Action (GMHA), who is supporting another tenant in the building, told us that residents weren’t properly informed about the new fire alarms or the waking watch:

“They were just told it was to do with the tenancy, and the people in the car park with a foghorn were there to keep the building safe. They were never told these people were there because there was a closure order in progress.”

An email from GMFRS to GMHA says that “all residents were as far as we are aware informed of this [waking watch] on the day [1 July]”.

Scanlans have been liaising with GMFRS since the fire on 1 July. Scanlans, GMFRS and a homelessness officer from Manchester council attended a meeting on 13 October, where it was decided that the prohibition order could no longer be complied with in the building’s current state, due to the inability to safely evacuate the flats, and further issues discovered during repair works to the building.

Some leaseholder landlords owning the flats and tenants living in the building report that they were not invited to the meeting on 13 October, and were unaware of the dangerous state of the building until GMFRS knocked on their doors on 25 October, telling them they had to be out in one week.

According to the same email from GMFRS to GMHA, the fire service say they received confirmation from Scanlans that letters informing tenants and landlords of the fire safety situation regarding Old School Court had been delivered by hand on 2 July and 26 July.

The GMFRS email also says the prohibition notice “was served on the Resident Management Company which is legally responsible for fire safety in the building and is made up of Directors who own the flats. They appoint Scanlans to manage the building on their behalf”.

Scanlans were contacted for comment but had not responded by the time of publication.

Flats in Old School Court were, until a few days ago, offered for sale on various property websites, including Rightmove and Bridgfords. Several other properties are advertised for sale as cash only purchases due to a lack of EWS1 (External Wall System) fire safety form for the buildings they are contained within. That is not the issue with Old School Court, but the implications for the owners are similar.

Anyone who buys a flat like this will join the thousands of leaseholders nationwide who have been hit with high maintenance charges for building repair and to fund a waking watch. Some owners have received bills higher than the price they paid for their flats. Leaseholders in Old School Court were already paying for work on their building, costing them £10,000 each, before the fire safety issues became apparent.

“All buildings converted like this should require detection & alarms and sprinklers throughout, with most needing some kind of smoke extraction too. The number of service shafts, risers and rooms created within a pre-existing structure makes them far less predictable in terms of the way that fire & smoke will behave.”

We don’t know how many buildings in Manchester are affected by sub-standard fire compartmentation, although not all conversions are problematic. It is entirely possible to change a building’s use and sub-divide it safely with adequate fire detection and resistance.

Who counts as vulnerable?

The representative from GMHA is particularly worried about the young tenant they are supporting at Old School Court, and the prospect of them having to enter emergency accommodation like a B&B or hostel. The tenant was initially told they were not eligible for help from the council, and they will struggle to find social housing due to age restrictions imposed by providers, the GMHA representative said:

“I deal with housing young people, and the hotels and ABEN [A Bed Every Night] and hostels they’re going to be offered, if they’re offered anything at all, are far more unsafe than this block of flats, and full of drugs and violence and theft. I regularly deal with young victims in hostels who have been robbed or indecently assaulted in them, as confirmed by Dame Louise Casey’s report warning on ABEN last year.”

The Housing Act 1996 imposes a duty on local authorities to provide accommodation for applicants who are homeless and in priority need. Section 189 defines who counts as having priority need: “a person who is vulnerable as a result of old age, mental illness or handicap or physical disability or other special reason…”

It’s possible to interpret this definition in such a way that excludes a lot of people we might reasonably consider to be vulnerable, such as young people with limited housing options. Additionally, when considering vulnerability, the council only needs to consider how the applicant would fare compared to “an ordinary person made homeless”, rather than considering the detriment of being made homeless in itself.

We spoke with another tenant in the process of moving out on Sunday 31 October:

“I’ve currently got nowhere to live, so I’ve got a viewing on Monday, which is the deadline for when we get kicked out. If I don’t get that I’ll have to go to another city, because there’s no-one near me who I know.

“I won’t be completely homeless, at least. But I will have to flee the city, pretty much. And it’s kind of affecting my work as well, because they’re getting funny about it. It’s such a rat race finding somewhere to live, you’re competing with so many people.”

What this means for residents

Enforcement of the Article 31 notice makes it a criminal offence for leaseholders to occupy or let their properties. Tenants who have not already moved out face eviction from their flats on 1 November. Some residents were planning on resisting eviction, because they have nowhere else to go.

According to information received by GMHA, prior to 1 November, eleven residents had contacted Manchester city council’s homelessness team. Following assessments, six of them were considered eligible for emergency accommodation in a B&B. Four had been told they do not qualify as “vulnerable” and there is no duty to house them, and one application was still being processed. About twenty residents had not contacted the council about this matter prior to 1 November, according to GMHA.

“Since being alerted to the safety concerns at Old School Court the Council has worked to ensure that all residents could secure, suitable accommodation.

“This has been a fast-moving situation and we appreciate how distressing this must have been for everyone living there. At each step of this process the Council has tried its best to keep residents informed about what options were available to them.

“When it was determined that emergency referrals for temporary accommodation could be made, work took place to reassure residents that everyone would be offered support and accommodation by the Council.

“This situation was the cause of a great deal of anxiety for residents, therefore staff from the Homelessness Team were on site on Monday (1 November) to provide advice and reassurance to them.

“We will continue to work with residents to secure new accommodation or until such a time it is safe to return to their homes.”

Article amendment on 2 November 2021: The article was altered to include comment from Manchester city council on their actions in regard to the residents of Old School House.