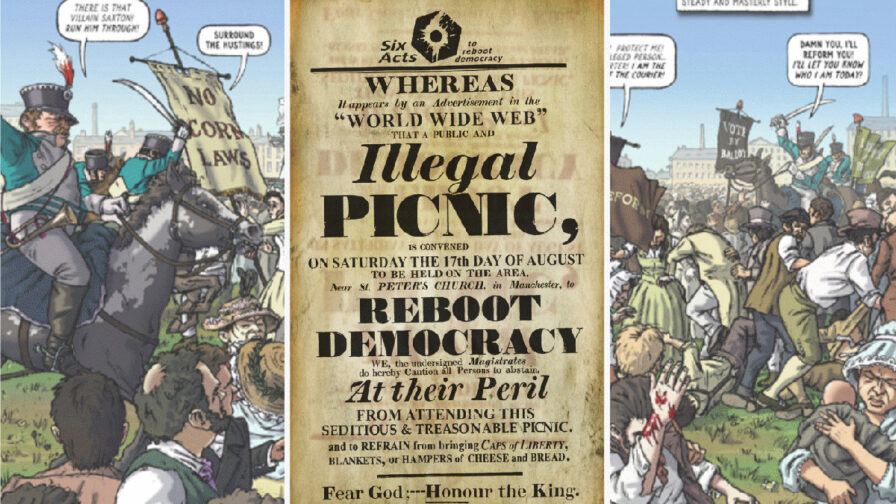 It’s two hundred years since Peterloo, where those calling for democratic reform were slaughtered by government forces. A new campaign called The Six Acts aims to honour those who fell, in the struggle for a more inclusive democracy, by rebooting democracy today. And they need your help to do it!

On the 16 August 1819, some 60,000 people congregated peacefully in St Peter’s Field, Manchester, demanding the right to vote. Dressed in their best Sunday clothes and coming from all over Lancashire, they marched behind banners and flags to hear speeches calling for parliamentary reform. The gathering caused fear of sedition in government circles. Acting as a quasi-police force, under the orders of the local magistrates to arrest speakers at the event, yeomanry cavalry mowed down the crowd with their sabres, killing eighteen people and injuring a further 654.

The British state tried to suppress further calls for reform by having Parliament pass the Six Acts, a draconian set of measures designed to outlaw freedoms of speech and assembly. In spite of this, the demands of the Peterloo Reformers for universal suffrage were met, albeit many years later. Inspired by Peterloo, subsequent generations struggled for political change. A series of Reform Acts in 1832, 1867, 1884, 1918 and 1928 extended the vote to the majority of adult men and women.

In ironic allusion to the infamous acts passed in Peterloo’s wake, The Six Acts to Reboot Democracy campaign aims to harness the widespread disillusionment of our political system in society today in order to address its issues. It is designed to crowdsource ideas for rethinking democracy, covering six categories the campaigners believe there is room for improvement in how our democracy functions:

·        Ensuring the accuracy of political information

·        Other – anything outside the scope of other categories

Full descriptions of the categories can be found on The Six Acts website. The Six Acts campaign are hosting an “Illegal Picnic” on Windmill St in front of the Manchester Central Convention Complex (formerly GMex), Saturday 17 August, 3pm, to commemorate the bicentenary of Peterloo and kick off the Six Acts campaign. The picnic site is on the original site of St Peters’s Field where the massacre occurred 200 years ago.

Paul Fitzgerald has been helping to organise Peterloo commemorations for many years as a member of the Peterloo Memorial Campaign, and has also this year released a graphic novel about Peterloo, based on verbatim quotes recorded from the time of the Peterloo Massacre. For the bicentenary Fitzgerald and his colleagues decided something extra was needed.

“Continuing the reform movement is the only meaningful way to commemorate Peterloo. Bring bread, cheese and ideas”

Fitzgerald said, explaining why The Six Acts was created, while alluding to the contents of the packed lunches of the original Peterloo reformers. Indeed one reformer John Brierley of Saddleworth was crushed and trampled by horses, but he escaped serious injury from a sabre cut to the head, due to keeping his lunch of bread and cheese in his hat.

The website hosting the poll will open to public submissions during the picnic at 4pm. Anyone can submit a proposal to the Six Acts poll which should be a maximum of 100 words. Alongside the Six Acts launch there will be marches from Eccles and Salford commemorating Peterloo joining the picnic at 3pm.

There will also be live entertainment by Manchester-based street band Cacophany Arkestra. Groups such as Real Democracy Movement, Unlock Democracy, Positive Money, People’s Assembly, Manchester Humanists, Friends of the Earth and Extinction Rebellion will also be joining the picnic, and presenting their proposals to reboot democracy to the gathered picnickers.

Fitzgerald, a founding member of The Six Acts campaign, explained why it was crucial to re-engage voters in reforming democracy. We are, he said, at a critical juncture in British history. The Iraq War, the shameless manipulation of information and the ignoring of public opinion against it, “set a precedent for subsequent let-downs”, the hiking up of tuition fees, pernicious austerity projects and governmental equanimity to environmental breakdown. “As a result,” Fitzgerald said, “we have lowered our expectations and standards for political behaviour” on these key issues.

Disillusionment has eased the passage of “rampant corporate consolidation,” Fitzgerald explained, due to neoliberal advances where economic power is concentrated in the hands of fewer and fewer people.  Fitzgerald believes the public, with their lowered expectations, have come to accept that governments will often defer to the agenda and influence of a small power-base, rather than representing the interests of the people who elected them.

Our predicament goes as follows, Fitzgerald outlined, we can either cynically abandon democracy, which, “plays into the hands of its enemies.” In this scenario, “taking back control” will have been meaningless. In fact, it will only mean more power in fewer hands. Or we re-engage and struggle for the change we want to see. There are numerous causes today which push for greater democracy, according to Fitzgerald, such as electoral reform, Citizens’ Assemblies, economic democracy, co-operative ventures and devolution.

“Using the Peterloo Reformers as an example of what people can do in the face of adversity should inspire us to be proactive,” Fitzgerald said:

“Let’s not forget that the Peterloo Reformers had it a lot tougher than we do now. We’ve got no excuse for putting up with our crippled democratic practices, and every reason to repair them, strengthen them and reinvent them so that they work for us and for future generations.”

Feature image: Composite using The Six Acts poster and an image from the Peterloo: Witnesses to a Massacre