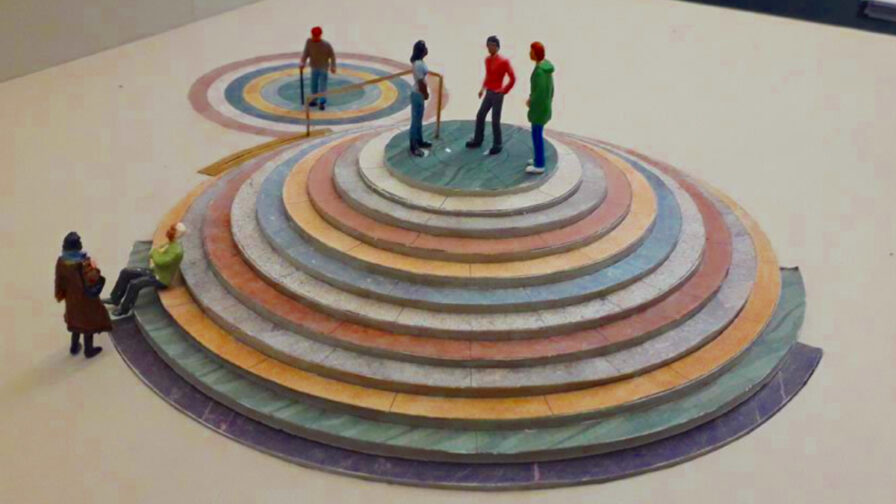 This year is the 200th anniversary of the Peterloo Massacre. Around 70,000 people gathered peacefully in St Peter’s Field, Manchester, calling for the right to vote so that marginalised communities across England could have a say in who represented them in parliament. Representatives that could fight for the rights of the marginalised and reduce the inequalities, chronic unemployment and grinding poverty that gripped the working class across the country. They were brutally attacked by sword wielding cavalry, leaving 18 dead and over 400 injured.

It is right that a memorial be built to that courageous struggle for social justice. But the proposed design for the monument serves to further alienate the disabled community, which is already experiencing austerity driven state sanctioned persecution.

Through Percy Bysshe Shelley’s poem ‘The Mask of Anarchy’ the events of the Peterloo Massacre (1819) are responded to and examined from the perspective of poetry. Shelley illuminates the ways in which we the people, when we work together, can overcome the chains in which the common people are kept by those in power:

Leigh Hunt, a colleague of Shelley, celebrated the poem as describing the inevitable struggle and mass uprising of a population suffering the inequities forced on them by “the spoilt children of monopoly – Mankind against Tory-kind.”

Shelley shows us the power of unions, assemblies and of people bringing their individual strengths together in committed activities. He offers us the tools of freedom – science, poetry and thought – to rebuke the powerful who:

“…turn their wealth to arms, and make

War for thy beloved sake…”

Shelley asks the question “What art thou Freedom?” His response shows there is little freedom for those suffering from poverty and hunger. With the current rising use of foodbanks across the UK the following lines are particularly apt for our times:

“No in countries that are free

Such starvation cannot be,

As in England now we see”

His response to the Peterloo Massacre along with many artists and activists (such as Sam Bamford) at that time was to use assembly, art, science and thought to express patience, spirit and gentleness to break our chains.

“Let great assemble be of the fearless, of the free.”

It was effectively an early form of passive resistance, of the many confronting the few with their solidarity and their obduracy. This is how we remembered and continue to remember the many who lost their lives or were injured on 16 August 1819.

Taking the above into context today we find ourselves in a similar political climate. Many ordinary people across the UK are suffering, remaining voiceless against an inhumane and persecutory Tory government. Above all though there is one demographic of people that have been hit most by Tory government and their austerity policies: cuts, reforms, privatisation of public services, stripping of assets and dismantling of the Social Security system. Disabled people have been affected nine times harder by austerity driven cuts than any other group. When disabled people with the highest support needs are considered that figure rises to nineteen times harder hit by cuts.

We can read innumerable reports by a myriad of charities and independent groups that bear witness to the fact of growing state sanctioned discrimination against the disabled community. The Joseph Rowntree Foundation, The Equalities and Human Rights Commission and Citizens Advice/Disability Rights UK have published comprehensive reports on the growing problem in the UK.

Disabled people are being excluded from society and from public spaces, driven into poverty, homelessness and all-too-often death. Many of the rights our community fought for decades to gain are being swiftly eroded and wiped out.

Many of you may ask – Why is it so important for the disabled community to speak out against one piece of public art work, to place so much emphasis upon our exclusion and the inaccessibility of the Peterloo Memorial monument being built outside the Manchester Central conference and exhibition centre?

Some of my answer lies within the former and  latter paragraphs but also let’s examine the actual piece of artwork, the monument itself. Jeremy Deller, the chosen artist, designed this piece to be inclusive, interactive, a focal point that is a speakers’ platform which represents activism and protest for past, present and future! Commemorating those who were massacred in cold blood on that terrible day but also a platform for the present and future so that activists today have a focal point to have their voices heard.

It was a great idea – the fact it is a memorial to Peterloo while at the same time a recognised place where we can speak from today gives the piece great significance and authority.

Unfortunately as the artwork excludes many of the disabled community – those most attacked and silenced by the Tory government – from reaching the speakers platform, the piece becomes an abject failure. It’s exclusion of disabled people is deeply offensive. It makes a mockery of what Peterloo stands for in British socio–political history and degrades and marginalises disabled peoples’ rights and voices even further. The Peterloo Memorial monument as it is currently being built is now literally a travesty!

To be fair to the artist Jeremy Deller when this travesty was pointed out to him he did try to rectify it by redesigning the piece to make it accessible. The blame now lies squarely at the door of Manchester City Council (MCC) who ignored all consultation around the excluding of disabled people and who should have refused Deller’s reworked piece, which still limits access to the speakers platform.

For MCC, headed by Sir Richard Leese, to knowingly go ahead and persevere with such an exclusionary work highlights a lack of solidarity with a targeted community. This occurs at a time where there are increased economic barriers to participation in the arts by disabled people due to them being more likely to live in a low-income household, compared to a non-disabled person.

While barriers are being raised everywhere against the disabled community the city council are reinforcing them by imposing this divisive piece of work on us. A Labour Council should be aligned with the increasingly marginalised disabled community, breaking down barriers, showing solidarity. It should be progressive rather than reactionary.

Several research reports have highlighted the importance of providing disabled people a positive experience of cultural activity:  Attitude is Everything, Consilium Research and Consultancy Report and the Arts Council Equality Report. Where research groups found barriers to access, be it socio-economic, physical or psychological, they found evidence leading to a vicious cycle further entrenching prejudices and exclusion of disabled people: .

The UK’s austerity driven social security cuts have also been found by the United Nations to have caused “grave and systemic violations” of disabled people’s human rights.

Where a piece of public art’s main focus was on inclusivity, interaction and to remember and give voice to marginalised groups one can only conclude that this imposition of the Peterloo Memorial by MCC is a travesty, making a mockery of what Peterloo stands for. It should not go ahead and the fact that MCC are still forging ahead with it is a disgrace. This monument is offensive to me and many other disabled people. Our community needs to make a show of solidarity. This piece, this moment in history, is now becoming a monument to our exclusion and a perverse celebratory statement on how disabled people are being treating by this Tory government and much of wider society.

Julie is a disability rights campaigner, wheelchair user and community arts practitioner, and can be found on twitter using: @JulieAForshaw