By Guest Writer | 29 November 2018Friends of The Meteor 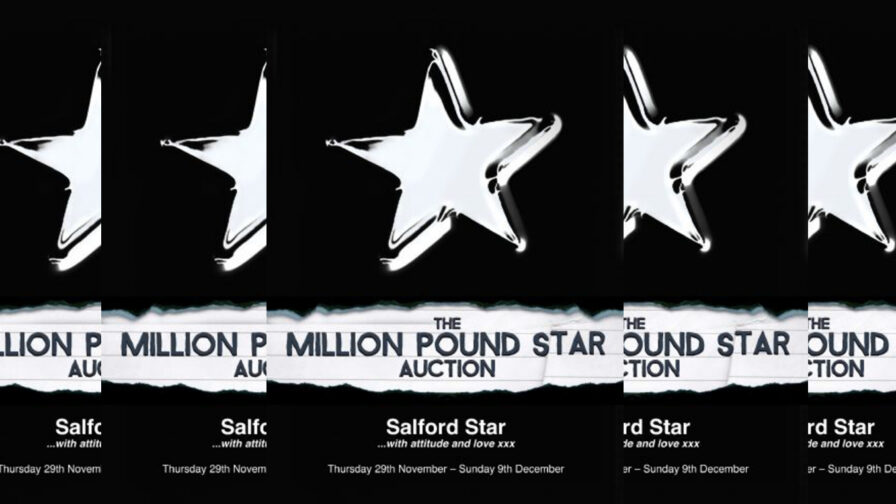 The ailing Salford Star is to hold a £1million treasure auction with a huge event in a pop-up unit at Salford Shopping Centre between 29th November and 9th December. Lots will include brilliant artwork from Salford’s top artists, once-in-a-lifetime memorabilia from the city’s recent past, unique photos from the Salford Star archive, incredible celebrity one-offs…and the original Salford Star itself.

Plus, there’s Ringo Starr’s brick, the teapot that’s been CPO’d three times…and a weekend with the Salford Star, including the chance to stay for one night in a dangerously cladded tower block!

There will be an auction on 6th December at Charles Taylor Auctioneers (Salford), with the lots on view beforehand at the Salford Star pop-up shop, plus a further auction in the shop on 9th December…

The Salford Star is holding a £1,000,000 auction and sale in its bid for survival. The fiercely independent Salford Star has around 40,000 readers per month and during the last 13 years has produced over 5,000 articles, including too many exclusives.

At the end of January, the Salford Star will be out of money completely and one of the longest running community-centred media in the country is set to close.

So, in a last gasp bid to keep going, the Star is launching a £1,000,000 auction and sale. Based in a pop-up shop, kindly donated by Salford Shopping Centre, the event will run between Thursday 29th November and Sunday 9th December in a unit on Hankinson Way (next to Lloyds Bank) and will include talks, performance, sales of merchandise and more.

The unit will also be displaying items that will be sold through an auction kindly sponsored and hosted by Charles Taylor Auctioneers (Salford) that will take place at noon on Thursday 6th December.

Lots will include a signed Stereophonics guitar, a genuine brick from Ringo Starr’s childhood home in Liverpool, original tangerine Salford City FC shirts and memorabilia, a signed Coronation Street script, and artwork and photos from Salford’s top artists, including a one-off signed print of Friedrich Engels by Happy Mondays graphic legend Matt Carroll, a stunning Dirty Old Town signed print by artist Rob Lever, succulent solar etchings by neo:artist Louise Garman, phenomenal Salford depictions by the ‘new Lowry’ Joe Coffey, an amazing white political statement relief on canvas by award winning Broughton artist Denis Whiteside, and signed prints from our own Star photographers, Gareth Lyons and Steven Speed. Full details of all these lots and how to bid will be published on the website over the coming week.

“Charles Taylor Auctioneers (Salford) are pleased to sell, by public auction on Thursday 6th December 2018, an unusual and unique collection of regional memorabilia, collectables and fine art on behalf of Salford Star. Full details can be found on our website www.charlestaylor.co.uk” states the company.

Meanwhile, on Sunday 9th December the Salford Star will be hosting a further auction at the Salford Shopping Centre unit, which will feature unique items collected over more than a decade of the Salford Star’s existence. These will include…

A Holiday With The Salford Star – spend a night in a real Salford tower block covered in dangerous Grenfell style cladding!  Go for a drink in a real Salford pub with Nigel Pivaro! Take a tour around the regeneration hotspots and visit the only beach in Salford, with Salford Star staff as your personal guides. Comes with an option to hand out socks and food to homeless people with Salford and Manchester Street Support, and a visit to the Star’s office in the stunning hills of Clifton. Plus lots more surprises!

The Salford Quays Crane – When Salford Council demolished the beautiful blue cargo cranes at Salford Quays, no-one was allowed a souvenir piece of them. However, on the day, the Salford Star managed to obtain a three inch long fragment from the jib. This treasured item is both a symbol of old Salford and the heritage destruction wreaked on the city by the authorities. Comes with a certificate of authenticity.

The Toilet of Broken Promises – over a decade’s worth of glossy brochures, Salford Council regeneration strategies and other publications, including limited edition hardback books for speculators by Peel Holdings and Countryside Properties all housed in a genuine 1970s avocado toilet bowl!

The Last Brick In Broughton – this incredibly rare brick comes from the very last affordable house demolished in the ‘Top Streets’ of Broughton. It comes complete with keys from one of the last houses demolished and a certificate of authenticity.

The Teapot That’s Been CPO’d Three Times! – The Star has in its possession a teapot from a family that have actually had their houses compulsory purchased three times by Salford Council. Its rich history is fully documented and it comes complete with a certificate of authenticity plus a religious icon from one of Salford’s derelict, tinned up houses, and a bottle of very strong home-made Liberty

apple wine, made by one resident who escaped over the border to Wales after his house was demolished.

“I know it’s a bit extreme charging over £1million for items that people may regard as worthless but for us they are our treasure…our memories, our pieces of a city fast disappearing into speculators’ pockets” says Salford Star Editor and co-founder Stephen Kingston, recently named as one of the most respected journalists in the country in the NCTJ Journalists at Work 2018 survey, along with Kate Adie, Jeremy Paxman and John Pilger.

“To stay alive we have no money, only these precious artefacts” he adds “There is no media fair trade in the UK so we literally have to sell the Salford Star’s soul. How much is independent news worth? We believe it’s worth a million quid. Hopefully really nice people will buy something at a lesser price and look after it, knowing that they have played a part in keeping the D.I.Y. media spirit alive…”

Nigel Pivaro, long time contributor to the Salford Star, says “Dig deep for that fluff covered pound coin, or even better, those dyed stained twenties, because we at the Salford Star love digging…We dig where others like the Council, the developers and big business would rather we didn’t. So help us to keep on digging to uncover what you, the readers, deserve…the facts. It’s the most we can do for you; it’s the least you can do for us…”

“The Salford Shopping Centre is delighted to support the Salford Star in what promises to be a fun event, happy bidding!” says Nicholas Pitt, Regional Centre Manager Salford…

First published in The Salford Star on 23 November 2018

There will also be a range of new Salford Star t-shirts on sale at the shop, plus photos, magazines and more…

The full programme of events and exhibits plus interviews with contributors will be on the Star website every day until the auction.