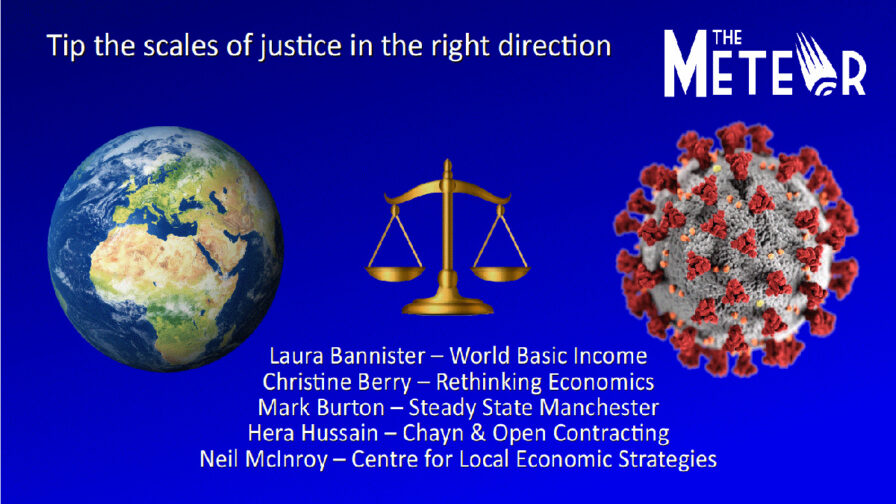 Video of online debate discussing the big issues around the Covid-19 crisis. A pandemic that has shook the world and destabilized the status quo. What will take its place?

Five panelists from Manchester shared a wealth of knowledge and ideas at this debate, which asked the question: The Covid-19 crisis offers opportunities to create a better world – can we seize them? The live Zoom event, organised by The Meteor, was recorded on 14 May 2020.

The debate investigated the opportunities this crisis offers to create better, fairer and more sustainable societies, from the local to the global, that could better serve the majority of humanity and preserve the natural world we are all dependent on.

The panelists also discuss the considerable political, economic, social and environmental risks we face if the opportunities to steer our world to a better course are not seized.

Christine Berry – Rethinking Economics, Co-chair. Christine was formerly a part-time director of the Policy and Government unit at the New Economics Foundation think tank, whilst studying for her PhD at the University of Sheffield. Previously she has also worked as a researcher for the pensions charity FairAction and for David Haworth MP after obtaining her degree in Social and Political Science from the University of Cambridge. Christine’s talk starts 16 minutes and 32 seconds in.

Mark Burton – Steady State Manchester, Collective Member. As an Independent Scholar-Activist, Mark has concentrated on the relationships between economy, environment and social justice in the context of the Manchester city region. His former career was as a psychologist and subsequently a senior manager in health and social care services. Mark’s talk starts 28 minutes and 7 seconds in.

Hera Hussain – Chayn & Open Contracting, Founder. An activist and social entrepreneur Hera’s award winning feminist tech project Chayn helps survivors of abuse get the information and support they need. She combats corruption with Open Contracting which aims to transform public procurement so it is open-by-design, fair and efficient. Hera’s talk starts 39 minutes and 11 seconds in.

Neil McInroy – Centre for Local Economic Strategies, Chief Executive. A leading commentator on economic development and public policy, Neil has featured in Local Government Chronicle’s annual top 50 most influential people in local government. He has been involved in public sector policy and delivery for over 25 years. Neil’s talk starts 46 minutes and 14 seconds in.

Writer, journalist and Meteor Community Member James Doheny chaired the debate. James is a former BBC Radio journalist/presenter with bylines in The Times and WIRED. He has also been a business consultant for companies including Apple. His primary journalistic interests are politics, tech and music.

We are at a pivotal moment in history. Humanity’s future hangs in the balance. The coronavirus pandemic has already left tens of thousands of families in the UK grieving the loss of loved ones, and over 200,000 dead globally.

The effects on the global economy have yet to fully sink in but the crisis threatens to bite with Tyrannosaurus sized teeth that will make the Great Recession of 2008 seem like a puppy play biting. The devastation caused by this crisis is extreme, but could it act as a catalyst for positive change?

Conrad Bower is a co-editor at The Meteor and was involved in organising this event.