Take the Post Growth Challenge to help reimagine our economy

By The Meteor Team | 5 January 2021Editorial 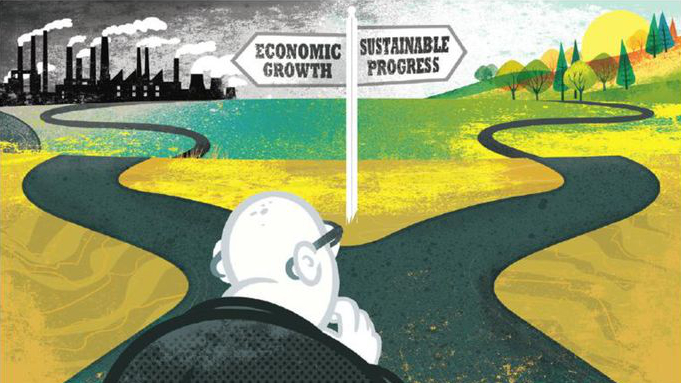 The dominant global economic system says infinite growth is possible on finite planetary resources. It is a system which is devouring the planet, increasing human inequality, decreasing biodiversity, and spewing out vast amounts of greenhouse gases causing devastating climate change.

There needs to be an alternative to the endemic and irrational idea that rising GDP is the only way to measure progress. The Post Growth Challenge is your chance to present that alternative.

The Covid crisis is a big one, and the new variant and lockdown is extremely concerning, but it is not the biggest challenge that humanity faces. We will survive Covid. We will not survive runaway climate change if we carry on emitting excessive amounts of greenhouse gases, that are slowly but surely poisoning our planet.

The large and growing body of evidence that human activity is causing climate change makes a clear cut case. We have to drastically change how we live and operate as nations and as a global community to prevent average global temperatures rising by 1.5 0 C  above pre-industrial levels – or else face devastating consequences. We reached 1 0 C above these levels in 2017. The IPPC special report in 2019 estimated that a 1.5 0 C  rise would occur in 2040.

We may not even have to wait until 2040 to get a brief and undoubtedly unpleasant experience of such a temperature rise. The World Meteorological Organization reported last July that there is a 20% chance that average global temperatures will exceed 1.5 0 C in at least one year in 2020-24.

Research into how human activity is exceeding planetary boundaries shows it is not just carbon dioxide we need to worry about. We are also severely, and in some case irreversibly, reducing biodiversity by destroying ecosystems and the flora and fauna dependent on them.

The concept of infinite growth is incompatible with the finite nature of the planet and the resources which support human life. Meeting our targets of three per cent growth per year would mean doubling the size of the UK economy every 27 years, or increasing it eight-fold in an average Western lifetime.

The Global Footprint Network provides a useful figure to demonstrate how we are living beyond the Earth’s means. Ecological footprinting measures how many resources are used to produce what people consume and calculates the resulting carbon emissions. From this data an estimate of how much of the Earth is needed to support that lifestyle is made. The average consumption for the population in the UK in 2017, would need 2.6 earths if everyone on Earth consumed at the same rate. In the USA, the world leader in unfettered capitalism and consumer culture, that figure rises to 8.0 Earths.

This is why The Meteor is supporting Steady State Manchester and the Systems Change Alliance in presenting The Post Growth Challenge. This co-operative challenge, open to all, aims to find different and engaging ways to present post growth alternatives to the dominant economic ideology advocating infinite growth and addicted to rising GDP.

The challenge is to create a concise and easy to understand summary of how Post Growth ideas have the potential to benefit all and produce a viable economy that can support life on Earth. How this work is presented is up to you, it can be a written submission or it can be presented in graphic terms using infographics, cartoons or video. The Challenge states:

“It needs to be presented in straightforward, concise, easy to understand, and attractive terms, without denying the real difficulties involved in reducing the material and energy throughput of our economies.”

Entries need to be submitted by email before the closing date of midnight 31 March 2021. Full details of the challenge are available on the Steady State Manchester (SSM) website. Mark Burton, a member of SSM, explains why this challenge was created:

“The Green New Deal has become a key reference point for those seeking a viable economic, social and ecological future. However, most versions are flawed, failing to recognise the problems of rebound, economic colonisation and the power of incumbent corporations.

“A family of alternatives exists, variously described in terms like ‘degrowth’, ‘post-growth’, the ‘steady state economy’ or ‘the simpler way’. But perhaps due to their complexity and their truly radical implications, their proponents have not caught the public eye like the Green Dealers have.

“What if it were possible to succinctly portray an attractive policy package, that could be almost lifted “off the shelf” for political campaigns and manifestos?  Could it be done?  Our Post-Growth Challenge has been posed to find out.”

You can read more about Post Growth movement in this previous article by The Meteor and the degrowthUK networking site.

The obsessional focus of world leaders on rising Gross Domestic Product is a major concern for supporters of the Post Growth movement.

It has become the go to measure of social and economic progress for governments across the world, even though one of GDPs inventors Simon Kuznetz said in 1934, “the welfare of a nation can scarcely be inferred from a measurement of national income”. His criticism has been joined by many other economists, who condemn GDP for many reasons, including failing to take into account environmental degradation and rising inequality.

A UN report last year showed that inequality is rising for more than 70% of the worlds population, while a burgeoning billionaire class has seen its wealth rise by $10.2 trillion during the Covid crisis

The Covid crisis will kill millions across the globe and, despite what politicians have said, we are not “all in this together.” Our dominant economic system creates, perpetuates and increases inequality. It is those left disadvantaged by our current system that will suffer and die the most. In times of crisis ideas which were previously thought impossible by the majority, become possible. But to become possible these alternatives need to be out there being discussed and dissected, to allow them a chance to flourish in the fertile conditions for ideas to grow, and become realities, this crisis creates.