Sustainable development or mini America – which will Manchester choose? 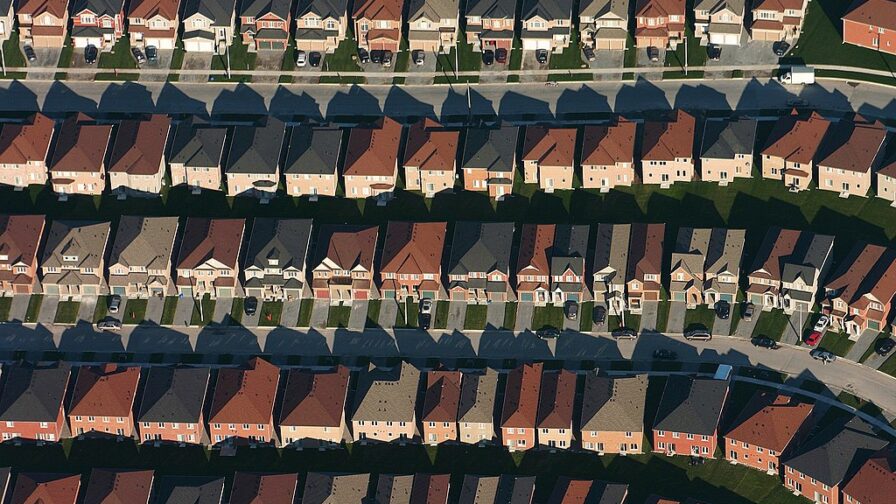 Andrea Sandor argues why we should use the Netherlands as a sustainable development model for integrated housing and transport, and not the USA.

Attending a talk by Transport for New Homes (TfNH) recently I was delighted to discover their strapline is “Sustainable development or mini America”. As someone who grew up in America, I fully approve of this motto.

Too much of my childhood was spent in suburbs without pavements (I call them sidewalks), cut off from town without meaningful public transport, and reliant on parents to ferry me and friends around.

Things have deteriorated since then. The suburb I grew up in outside Washington DC is relatively well connected, compared to some of the new housing developments that have sprung up off motorways. Whereas I could walk to a shop from my house, people living in these estates can only reach a shop by driving on major roads. These aren’t communities, they are collections of isolated and disconnected dwellings. I was therefore dismayed, although not wholly surprised, to learn about the extent to which the UK has adopted a similar approach to building new homes.

1.5 million new homes in England, but how many sustainable?

In England between 2008-2018, 1.5 million new homes were built on greenfield land, and in 2018-2019 housebuilding hit a 30-year high with over 241,000 homes finished. To find out how sustainable these are from a transport perspective, TfNH visited over 100 urban extensions and greenfield estates. They discovered, as outlined in their 2018 report, that most of these developments aren’t living up to the high expectations often outlined in planning documents about new homes. Most don’t facilitate community, active lifestyles, or a low carbon future. Instead, they’re heavily dependent on the car and lack public transport or walking and cycling provision. Rather than being the green and pleasant environments often described or shown in glossy brochures, they’re “houses that empty onto car parks,” in the words of TfNH campaigner Steve Chambers. A new report from University College London has reached similar conclusions, saying too many estates have been built with “serious design flaws”.

All this is relevant to Manchester because our population is booming. The Office for National Statistics predicts Greater Manchester’s population will grow by over 200,000 by 2040. Transport for Greater Manchester (TfGM) reckons this will translate into 800,000 more journeys per day by 2040. If the bulk of those journeys are to be by public transport and active travel (e.g. walking and cycling), then these new homes need to be built around and in tandem with sustainable travel and not cars that increase congestion and spew carbon. If these journeys are by car, our roads will become seriously congested and contribute more pollution to our already heavily polluted air. One in 23 deaths in Greater Manchester is now linked to air pollution.

This is where the UK has gone awry. In their 2018 report, TfNH spoke with planners who “explained how the government was anxious to get homes built, but the targets given to local authorities to build these homes do not take into account public transport or indeed proximity to services and employment.” Essentially, planners have approved sites for new homes and then worried about transport afterwards. Developer funding, when they don’t wriggle out of their Section 106 commitments, is then used to build new roads or increase road capacity to link up the isolated development, adding thousands of new car journeys onto already overcrowded roads.

A notable exception is Cranbrook, a new town east of Exeter that includes a train station. Local authority officers, however, explained to TfNH that securing the station took many years of preparing business cases and complex negotiation with Network Rail and others. TfNH concluded, “It made us aware of the many barriers to delivery of local rail. Funding road capacity appears much easier.” This is in sharp contrast to new housing developments in the Netherlands, such as Houten which was designed around two rail stations, along with a network of walking and cycling routes, meaning car ownership isn’t essential.

Manchester’s in a good position, but there’s reason to be wary

Manchester, as a metropolitan area, can more easily avoid the mistakes of building isolated, car-based developments. In their research, TfNH found large scale housing within urban areas tends to be more successful: “Rather than assume that future residents would likely want two or more cars per household and that access to the fast road system was paramount, the shift of emphasis was to innovative walking routes, cycling, access to the existing public transport network and towards a more interesting and varied public realm.”

Manchester’s in a fantastic position to ensure new housing is built around public transport. Last week brought the news that Northern Rail have lost their franchise, while it looks likely buses in the region will be brought back under a London style franchise model as well. Mayor Andy Burnham and the region’s walking and cycling commissioner Chris Boardman also made headlines last week for their call for the government to back plans for an 1,800-mile ‘Bee Network’ of safe segregated routes for pedestrians and cyclists, which would be a blueprint for the nation.

It’s in this context, I was heartened to hear Simon Warburton, Transport Strategy Director for TfGM, speak at TfNH’s event about an “urban renaissance” set to take place in the “Northern Gateway”, the 155 hectares north of the city centre earmarked for housing. Although how much will be affordable is another question. TfGM are aligned with Andy Burnham and the GM Combined Authority’s (GMCA) vision for reducing car-dependency and boosting public transport and making active travel an actual thing. Warburton also says we can expect to see a lot of resources coming our way from central government for public transport.

There’s reason to be sceptical. Despite public outcry, Manchester City Council are carrying out a number of multi-million pound road expansion projects at the moment. Controversial work on Great Ancoats Street is underway, which removes cycle lanes. In Hulme, the Princess Rd roundabout works involve increasing vehicle capacity and will make it significantly more difficult for pedestrians to cross. Another road widening scheme is Hyde Rd, which doesn’t include cycle provision and will sever the second busiest cycle route in the city for a year. In Ancoats, the Council plan to use the former retail park as a temporary 24/7 440-space car park, despite the site being in an area with “lethal and illegal” levels of air pollution and next to the city centre’s only primary school.

All these road schemes will invite more cars onto the road, rather than relieve congestion. Induced demand is the well-evidenced phenomenon known for decades that increasing road capacity to relieve congestion encourages more people to drive. If we’re going to be carbon neutral by 2038, as Andy Burnham has pledged, we need to reduce the number of cars on our roads. Electric cars won’t save us because they also cause particulate air pollution and make no difference to chronic congestion.

Let’s look to the Netherlands

In the Netherlands, urban public transport is a priority. TfNH reports “Whereas in England [new urban extensions] would be oriented around a road system with car parks, development was done differently with everything part of a network of streets for walking, cycling, or catching the bus, rather than the assumption that ‘of course, most people will drive’.” They also said, “Dutch planners showing us around reminded us that out-of-town supermarkets had for many years been heavily discouraged by the planning system. This was for reasons of maintaining town centre vitality. The idea seemed to really work.”