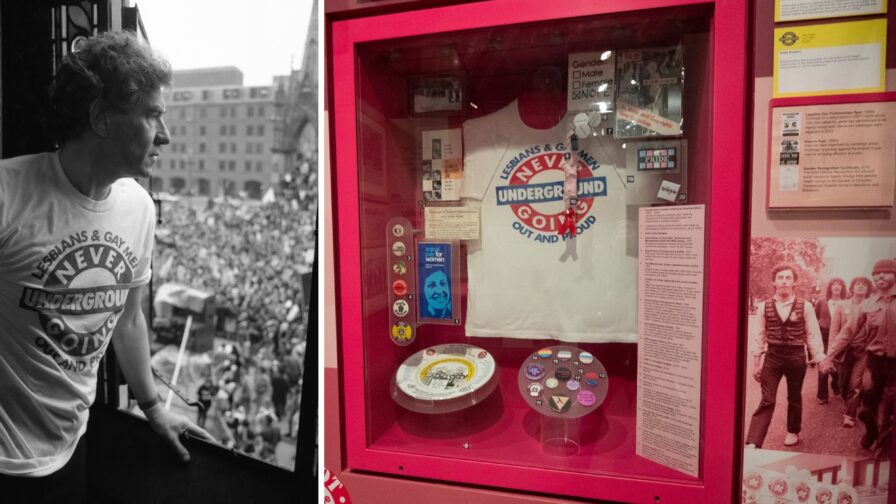 Three objects that epitomise the successful struggle for change in Manchester are presented from the People’s History Museum’s collection.

Director Katy Ashton raises concerns over the police powers bill, “Peterloo would not have happened with this proposed legislation in force.”

If your expectation for a museum visit is a staid exhibition of historical artefacts separated by glass and roped off areas prepare for a pleasant surprise when visiting the rust red building with conjoined Pump House that is home to the Peoples History Museum.

Situated between the River Irwell and the Manchester Civil Justice Centre its the only museum in the UK dedicated to the history of British democracy, and the struggle to reform it. Since its refurbishment twelve years ago, the museum has welcomed over one million visitors through its doors.

The Pump House became the home of the National Museum of Labour History in 1994, which was renamed the Peoples History Museum in 2002, in the run up to the Commonwealth Games in Manchester. The new name accompanied the museum adopting a more diverse exhibition programme, with a focus on cultural diversity and social inclusion. In 2010 the Pump House was renovated and a four-story extension built, clad in the same red rusted steel used for the Angel of the North, allowing the museum to open in its current form.

This is a museum that houses its thousands of artefacts in a way that nurtures and encourages public involvement with them. Visitors of all ages are invited to engage in the history of working people focusing on their struggle for democracy and social justice, from the early years of the industrial revolution to the present day and beyond. This is very much a living collection which enables the browser to learn of the past, involve themselves in the present, and look to the future.

The national museum holds the largest collection of political material in Britain including a colourful collection of over 450 trade union and political banners which includes the oldest union banner dating back to 1821. The museums myriad items include gems such as former Labour leader Michael Foot’s donkey jacket, Thomas Paine’s desk from the 1700’s, and a growing collection of contemporary climate change protest posters.

The Meteor spoke to Katy Ashton, director at the People’s History Museum since 2010, asking her to identify three artefacts on display that, for her, mark historical radical changes in the regions history and how these changes pertain to all our futures. Katy started by explaining how she made her choices.

“To put these objects in context we invite people to examine these artefacts with their associated history and hope that they are inspired to take radical action today reflecting the museum’s role in its aim to improve social justice from where we are at present. Many of these issues represented in the museum are still ongoing and the struggle for equity and equality remains unresolved.”

Katy’s first choice was a wooden finial, a decretive cone shape which tops a pole, from one of the banners present at the infamous Peterloo Massacre in 1819, where thousands gathered in Manchester demanding democratic reform, were charged on by cavalry bearing sabres and armed militia, killing 18 and wounding many more. The finial is in the shape of a “cap of liberty” which was especially significant at the time being just after the French Revolution (1789-99) where it was worn by revolutionaries and became an emblem of liberty, feared by monarchies across the world.

As Katy explains this demonstration was a pivotal moment in the nation’s history, concerning working class democratic rights, that took place right here in the heart of Manchester.

“This object, although very small, represents a lot of significant things. The red colour is symbolic of radicalism and the cap of liberty is representational of freedom and liberty and was commonly used in the 19th century. Sixty thousand people gathered to demonstrate in the city that day demanding universal suffrage, the right to vote for all. Ordinary workers gathered from surrounding local mills and factories to question the controlling establishments status quo. They recognised that change does not come about without a fight and that ‘people power’ could deliver that reform.”

Although those courageous campaigners for democratic reform were stamped on hard by the establishment in 1819, and the years following, the reform campaign continued spurred on by the outrage of the massacre. Many of the Peterloo marchers demands were eventually met with changes to legislation such as the Great Reform Act of 1832. But the need for democratic reform is a continually evolving process, and there were more battles to fight.

The second object which Katy says she feels a personal connection with is a campaigning “Pank-a-Squith” board game named after the two main adversarial protagonists in the struggle for universal suffrage, Emmeline Pankhurst and the then British Prime Minister and opponent of women’s suffrage, Herbert Henry Asquith. The game, which was available from 1909 onwards, is played by 2 to 6 players and shows the difficulties encountered by Pankhurst and her supporters, in the suffragette movement, during their fight for universal suffrage. Katy said:

“You can’t talk about Manchester’s campaigning history without talking about the suffragettes. The museum has a really extensive collection of items associated with the movement.

“Woman had always been involved in protests but this struggle saw them fight for their own right for a vote. The object I chose is actually a board game which also illustrates the amazing branding and the utilisation of objects by the Suffragettes to get their message across.

“Here we have the actual ‘Pank-a-Squith’ game on display as well as a large interactive version for visitors to play. The board game, as well as being fun to play, illustrates the aims of the suffragettes as well as the methodology of their protests. They were noisy, sometimes disruptive and even on some occasions violent, but they knew how to get their message across.”

The suffragette message was a powerful one which eventually led to women gaining electoral equality with men in 1928, when new legislation gave all women over 21 the right to vote. While electoral equality has been achieved the fight for equality for women in other aspects of life, continues.

The third object chosen by Katy is a t-shirt that was used in a campaign to support the rights of LGBT people to live their lives free from discriminatory legislation. One of these t-shirts was worn by the actor and LGBT rights activist Sir Ian McKellen, at a rally in Manchester. Katy said:

“Its something that feels really Manchester but has international importance and relevance for the LBGT community. The ‘Never Going Underground’ t-shirt was used to protest against Section 28 [or Clause 28], which was legislation for a series of laws, across Britain, that prohibited the teaching of homosexuality and ‘non-traditional’ relationships by local authorities or schools. For a city that is so inclusive and celebrates its diversity, items like this I feel really resonate with the people of the city and their fight for equality for all.”

The concerted people power opposing Section 28 led to it its repeal and removal form the UK’s statute books in 2003, a milestone in the ongoing fight for LGBT rights.

It was really hard to pick out just three objects, Katy explains, as the museum contains so many items that address current challenges that still face us today, including issues involving race, disability rights, age discrimination and other equality issues.

In light of these radical changes Katy spoke of the museums ongoing role in educating contemporary activism and her concerns on the forthcoming Police Crime, Sentencing and Courts Bill, and its potential effect on protests and gatherings in the future.

“The policing bill is attempting to take away that right to protest and the right to have a voice and dissent. None of the historical examples I have chosen, along with many other protests we have represented here, would have achieved the same impact if it wasn’t for some level of disruption.

“The sixty thousand people gathering at Peterloo would not have happened with this proposed legislation in force. That scale of noisy disruption would fall foul of this law. All of these associated demonstrations, I have mentioned, would have been, in some way, curtailed by this bill and its legislative restrictions. Going forward it is worrying if protest is not tolerated as part of our democratic process…

“Those that are marginalised in society are less likely to step up and voice their concerns if communities and groups of individuals are not allowed to protest.”

The museum today invites community groups, schools and other educational facilities as well as individuals to come for a visit and to engage in programmes offered. The programmes are specifically aimed at community collaboration and the museum is always looking out for new organisations across all ages and demographics to form partnerships with. Currently the museum has programmes with schools which includes campaigns such as environmental action and they always welcome contact from others in the community. Katy said:

For all the examples from history where campaigning has led to change, that the museum documents, Katy says that:

“Today we must recognise that all of the rights and freedoms we have at present have never been freely given, they have been hard won… Everything hasn’t gone away or been fixed we still have a job to do. We, at the Peoples History Museum, want people to be inspired and to keep having a voice on things which are important to them.”

All in article photos by Gary Roberts, unless otherwise stated