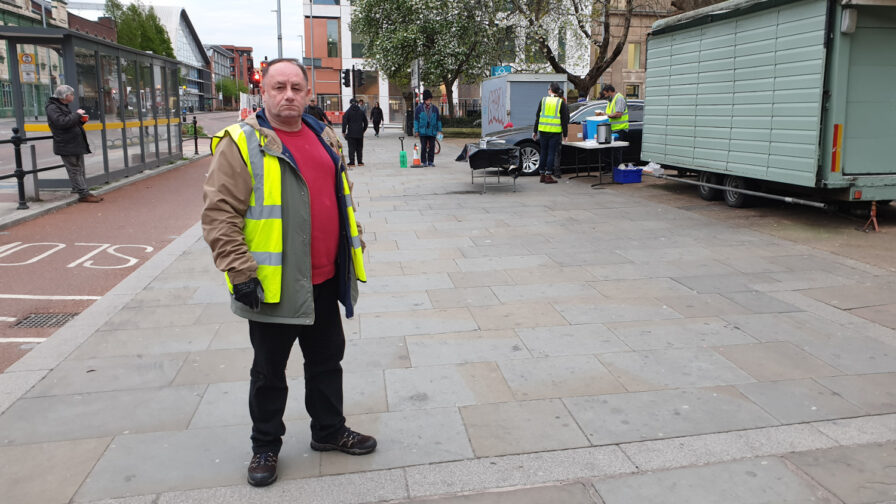 Volunteers running an outdoor soup kitchen in city centre Manchester are reporting increased demand for food during the pandemic lockdown.

People using the kitchen include many of the temporarily housed homeless, those still sleeping on the streets, the working poor and those struggling to survive on welfare payments.

A band of volunteers responsible for outdoor soup kitchens in the city centre have reported a large increase in demand from homeless people and others in Manchester severely affected by the coronavirus crisis.

The crew behind Street Meets first started offering help to the homeless and the increasing numbers stricken by poverty over ten years ago. The introduction of austerity by the coalition government and the growing inequality and deprivation that followed was the catalyst that got the initiative underway, according to Street Meets volunteer Paul Kelly.

Oxford Rd was unusually quiet and empty for an early Saturday evening as I travelled to the location just outside All Saints Park, where the group sets up their soup kitchen. As I approached there was an orderly well-spaced queue of around 12 people waiting patiently for food, with others sitting and standing further away eating and drinking. One of the five volunteers had a disinfectant spray canister with a long hose and nozzle that he was offering to those queuing up for food so they could wash their hands.

Initially Street Meets had just come out on one night a week on a Wednesday to set up their soup kitchen. However, increased demand since the pandemic and subsequent lockdown has seen them out at least three nights a week at 7pm at their usual location on the pavement on Oxford Rd outside All Saints Park.

Kelly reports that there is a lot more demand because a lot of the usual food sources for the destitute are no longer available:

“A lot of the established soup kitchens have not come out; they have bunkered down and disappeared. As a consequence there are a lot of people still on the streets that need feeding… the other consequence of everything shutting is that food banks are gone and people are giving less because they can’t afford to feed themselves.”

The Trussel Trust’s food banks in Manchester have closed their distribution sessions to the public due to Covid-19, although they report that they are still providing emergency food packages through agencies.

The emergency allocation of hotel rooms to the homeless in Greater Manchester during the pandemic has been widely publicised and it is reported that more than 500 homeless people are now living in hotel or B&B accommodation across the region.

Kelly says that he sees homeless people put up under this emergency rescue scheme coming down to their food kitchen because they don’t have enough food, “so maybe you are getting a breakfast in the morning, say cornflakes: for the rest of the day you have got to find your own food.”

The emergency allocation of accommodation has not covered everybody and has left some homeless people with complex needs uncared for, Kelly says:

“A lot of them are still on the streets…There are a lot of people with mental health problems who are on the street who certainly shouldn’t be here. We have had quite a few here who certainly need a lot of help: they are at risk to themselves and to others.”

Street Meet is funded by donations from the general public, and Mosques in the region also make a significant contribution to their work. Kelly is proud of their volunteer status and that they have no employees or CEO, and that they just want to see an end to the suffering of others whether it be caused by austerity or the coronavirus emergency. Kelly says they are giving out all their supplies of food and drink early every evening and wishes they had more to give. He says it is not just homeless people they are serving:

“A lot of people have been in care and places like that. People who have been evicted as well because they have not been able to pay the rent. We are getting people from all walks, even people who are working. We get a lot of Deliveroo people here because they are not getting a decent wage themselves, so we give them food. We will allow anyone here.”

The soup kitchen serves many people receiving welfare payments that don’t cover their living costs. Either the working poor such as Deliveroo riders or those not working who are totally dependent on the welfare payments such as Universal Credit, who Kelly says may be struggling due to sanctions to their payments or dealing with the extra cost of the bedroom tax.

Kelly says the police have been happy with their operation during the lockdown and he and his fellow volunteers will continue to help come what may, but:

“We shouldn’t be doing it, provision should be made for these people to be looked after and they are not being looked after…we should just see an end to it. These are the most vulnerable people.”

The current situation faced by vulnerable groups across Manchester is severe and he points out that it will be hitting the old, infirm and poor the hardest: the same groups that suffered most under austerity. Kelly sees an opportunity in this crisis:

“If they can house people now in hotels, we can do it after the lockdown. We can cure the scourge of homelessness. It’s not hard is it? If we can do it now, there is no excuse for this to go on any more… That would be my best result from this, the end of it.”

Manchester Street Meet will be at their spot outside All Saints Park on Oxford Rd on Monday 20 April at 7pm and Wednesday 22 April at 7pm. For more information on Street Meets – click here