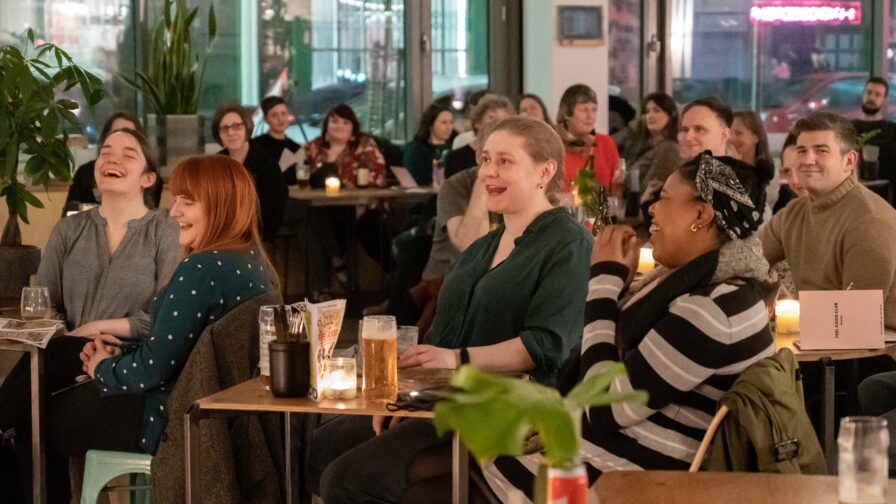 Addressing the gender imbalance in comedy, Contact Hostel organised an all-female lineup show at Feel Good Club café in the Northern Quarter, with all of the money raised going towards vulnerable teenage girls in Manchester.

The Feel Good Club café in the Northern Quarter is packed with a diverse audience of male and female friends, couples, old and young, and the odd well behaved furry friend. Candy-coloured posters and uplifting quotes remind patrons that “you are enough”, while house plants and vines create a welcoming and warm atmosphere. This is the perfect place to host STAND UP + FEEL GOOD – a night celebrating the humour and brilliance of women in the North West.

An abundance of talented people are here, from comedians to musicians to event organisers from Contact Hostel, who are sitting around in eager anticipation. Everyone is present in support of tackling sexism in the comedy industry whilst raising money for underprivileged girls and women.

For three side-splitting and eye-watering hours, the show features jokes ranging from cynical political commentary – like the Downing Street party scandal and immigration policies – to satirical feminist statements – unachievable beauty standards and dating issues – to offbeat streams of consciousness on horror films and the “mind the gap” transport announcement. The women strike a quality balance between uplifting, wholesome skits and self-deprecating jokes, providing the audience with a whiplash-inducing mixture of performances.

Since 1970, Contact Hostel has provided accommodation to young homeless teenage girls in Manchester who have experienced domestic abuse, relationship breakdowns, forced marriage, threatened abduction and physical and emotional abuse. The lineup show, the charity’s second, was the latest way in which the charity sustained its vital work.

“We run events like this to raise awareness and money to keep supporting young women in Manchester,” Contact Hostel Finance Officer Hannah told the Meteor. “We receive funding, but our work’s impact and reach is better if people know who we are. So nights like this where people can get together and learn are really important.”

Andy Farrell, one of the trustees of the charity, celebrated the work of Contact Hostel for helping almost a thousand young women get back on their feet, thanks to the generosity of local volunteers, case support workers and donors.

Chortle Student Comedy Award finalist 2020/21 Charlotte Cropper was the fifth act of the night and, aged 21, was the youngest of the eight comedians. She began her anti-capitalist set with, “I don’t think I’ve ever been relaxed”, which was then followed by an eruption of cheers and laughter from an audience revelling in the relatability of collective pandemic stress.

After her viscerally relatable act, Charlotte shared her thoughts on how important representation of women in comedy is. “I’ve always loved comedy. Growing up and seeing women like Katherine Ryan on the telly was really what made me love it. I love being creative, and I started out writing, and sort of became a performer because of that.

“But you really don’t find a female-heavy lineup in comedy. Tonight we’ve got an absolutely amazing bill of comedians. People who’ve been on the telly and semi-pro on the circuit. I mean, being the youngest, I’m definitely the most inexperienced on the bill, so I feel really privileged to have this opportunity. Not only to perform on the lineup but because this is a social event where I can meet other women and get to know and support others.

“The problem where you don’t have a lot of females on the bill, I think it’s probably not at the forefront of promoters’ minds, they just need to fill the lineup, so whoever messages first has the best chance of getting through. So that’s why nights like this are vital, not only for networking or for promoting things like International Women’s Day but because it should be like this, with at least three or four women for every single line up, in my opinion, because the talent here is exceptional.”

Data from a 2020 UK panel show gender breakdown highlights that women are regularly underrepresented in the heavily male-dominated industry. From panel shows to screenwriting, the Television Business International in 2018 found that despite some of the most commercially successful and critically acclaimed comedy shows being written by women, a disproportionate 11 per cent of comedy screenwriters in the UK were female. And a similar gender imbalance echoes in the stand-up sector of comedy, fuelling a sense of competitiveness for the few spots available to female entertainers.

With a lineup offering an extensive range of material, it was clear that the night’s event wanted to fundamentally change this reality. They rejected the idea that “once you’ve seen one female comedian, you’ve seen them all,” which Tegan once had said to her by a man after her show. Instead, highlighting that female comedy is not a ‘one size fits all’ source of entertainment, Tegan told the Meteor:

“I always hear people saying, ‘oh, all female comedians do is talk about their vaginas, ’ which is ridiculous. Or I’ve had an older man come up to me and say, ‘I don’t really like female acts, but you were great’ – as if we’re all the same. That’s, again, what is great about tonight. We’ve seen everyone doing something completely different.”

Attempting to change this gender imbalance in comedy, Contact Hostel platformed female comedians due to women historically being forgotten in the comedy industry. Women are faced with the sexist stigmatisation that “women aren’t funny,” with the BBC even giving oxygen to the overgeneralisation. “The gender imbalance has improved more recently”, Tegan says, but a new issue has arisen in the form of with female comedians becoming “tokenised” by show organisers.

“A lot of us haven’t actually met before or performed together in ages because we’re always the one token female of the bill, so we’re never on the same nights,” Tegan explains when I speak to her during the second interval. “It’s really nice to actually do something with all of us having fun and celebrating each other together.”

Canadian comedian Katherine Ryan boycotted Mock the Week in 2015 in retaliation to the show’s gender tokenism, stating that her choice to leave the show was to allow another woman the opportunity to succeed in the industry. However, the token seat that became available for a new female comedian was still perched at a table surrounded by “lad culture” and sexist banter that dates back decades.

In 2014 the BBC’s director of television Danny Cohen enforced a quota that panel shows must feature at least one woman per episode to address the gender imbalance in comedy. However, this ham-fisted attempt to introduce diversity into a male-dominated space was a surface-level solution to a sexism issue deeply ingrained in the history of mainstream British entertainment.

Author of ‘Cult British TV Comedy: From Reeves and Mortimer to Psychoville’ Leon Hunt noted that during the 1990s, comedians rejected second-wave feminism’s political correctness and feminist values by weaponising comedy to rejoice in masculinity and conservative ideology.

The #MeToo movement also shone a light on the sinister underbelly of live comedy, revealing a darker issue of sexism in the industry. British comedy website, Chortle ran a survey on sexual harassment in the workplace and found that the UK comedy profession is a “more hostile workplace than others” for women. The results stated:

“64 percent of female comics dealt with inappropriate language from fellow comics and 55 per cent from promoters. A total of 26 per cent had been molested by a fellow comic, 20  per cent by a punter before or after the show, and 15 per cent by a promoter or other industry figure.”

Aiming to tackle the sexual harassment issue in UK comedy, comedians Nina Gilligan and Kiri Pritchard-McLean launched their organisation Get Off! Live Comedy last year advising comedians that they want victims to feel safe enough to come forward and say something to them. Approximately 60 venues have joined the organisation, including the local Manchester comedy club Frog and Bucket.

Under patriarchy, where gender inequality naturally thrives, comedy is a healthy and cathartic release for the performer and audience. And inclusive, empowering events like STAND UP + FEEL GOOD are a good reminder of the power of camaraderie between women. “That’s why I love nights like this” Charlotte reflects. “You become a real cheerleader for other women in an industry that tries to make us compete.”