We stand together – do we really? 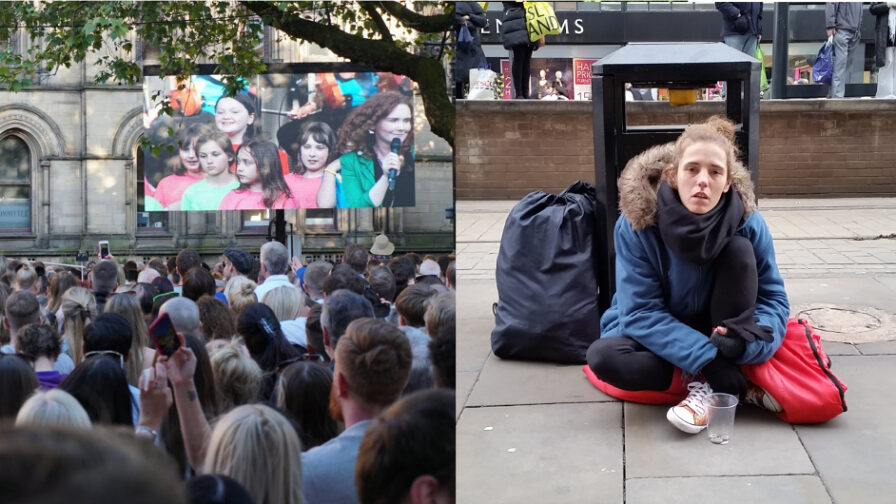 Just over a year ago, 22 people lost their lives and 120 were injured at the Manchester Arena Attack. It was a horrific hate driven act of mass murder, and my heart goes out to everybody affected.

One year on, 15,000 people gathered in Albert Square to pay their respects. The power and energy created in that moment was incredible, and it was a fitting to tribute to those who lost their lives. The #WeStandTogether hashtag was a popular one on social media shares of the event. But to truly stand together, we need to harness this and maintain its flow. These mass public gatherings only seem to occur after tragic multiple deaths or disasters, yet thousands in the city are having their own personal disasters due to austerity and a growing housing crisis. If it takes multiple deaths to make us stand together, how can we come together to stand against creeping injustices that don’t take life immediately but may increase illness and produce early deaths? The average age of death for somebody experiencing homelessness is 47 for men and 43 for women, and Greater Manchester experienced a yearly 42% increase in rough sleeping in 2017. And an increasingly hostile environment for disabled people in our social security system has seen a doubling of attempted suicides reported by claimants.

Don’t get me wrong, I love this city, we have two colossal football clubs and have been creating great music since forever. We also have a proud industrial heritage, and a history of fighting for liberty and human rights. I am a Mancunian, born and bred. I was born in Crumpsall Hospital, grew up in Openshaw, spent my teenage years in Gorton and spent my adult life in and around Levenshulme and Longsight. But in my 31 years of experience, we do not stand together, and our communities are becoming increasingly fragmented due to cuts to public services. Beyond our music and football teams, there is a lack of cultural, civic and community pride.

Our emergency services did a great job responding to the Arena attack, which is what we expect them to do, even with the reduced funding, manpower and wages due to austerity. Support and help has been offered to the victims and their families. But do we really stand together? Are we really this great city that does things differently?

Manchester is not just the vibrant Northern Quarter, or the affluent Spinningfields, or even the bohemian Chorlton. These just provide a very thin veneer over a Manchester where there is increasing homelessness, inequality, food banks, personal debt and job insecurity. Overseas investors are allowed to build residential properties in the city centre and forfeit on their agreements to invest in affordable housing and essential infrastructure. The End Child Poverty coalition reveals (as of January 2018) that in Manchester Central, 47.5% of children are living in poverty – that is 12,935 children living below the breadline. In Gorton, a place where I grew up myself, that figure is even higher with 48% of children living in poverty – that is 13,163 children deprived of adequate nutrition, resources and opportunities.

Manchester is the spice problem, and other’s suffering from drug addiction with reduced access to rehabilitation support due to cuts. Manchester is the multitude of disabled people being forced to jump through increasing numbers of hoops for reduced welfare payments, while there is an abject failure in addressing the issues of why disabled people are less likely to be taken on by employers.

Until Manchester solves these basic problems, I don’t believe that we have truly stood together. Until we have a city that isn’t divided, a city that doesn’t ignore its most vulnerable, I can never be truly proud of my city.

We need to build a city that is together, at all times, on all matters! Not just at times that look good on social media. A city that steps out of the shadows of its football clubs and musical genius. A city that solves its problems and looks after its residents and citizens and holds the people responsible for this accountable.

Manchester is rich with cultures and diverse in creed, we are all different. If we are to overcome problems and build this city, we need to pull together and harness the spirit shown in the commemorations for the arena attack. We have to work in tandem with our councils to provide them with our voice again, and make progress in overcoming our burgeoning societal and economic issues. Manchester is just a place on the map, it has always been its people that have made it.

Let’s stop telling the world that we’re doing things differently and actually do something different, and make the statement “What Manchester does today, the world does tomorrow” ring true again!