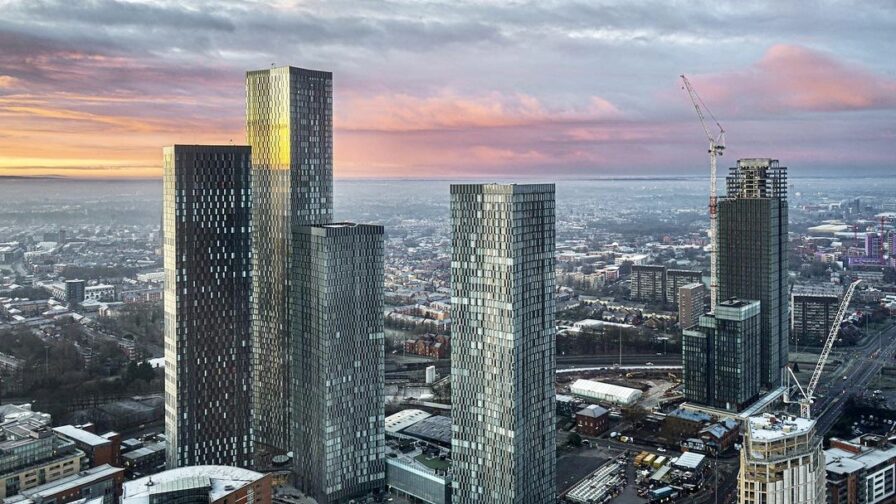 Councillor Bev Craig, the new leader of Manchester city council, has indicated that Manchester needs skyscrapers as well as affordable and social housing for it to be “ambitious”.

The new Manchester city council leader, speaking on the theme of social value at a conference last week in Cheetham Hill, said that Manchester needed to build affordable housing, social housing, and “housing that the private sector market wants to build”, for it to have an “ambitious and outward look”.

Craig spoke at the conference, co-hosted by Manchester city council and the Centre for Local Economic Strategies (CLES), on the importance of organisations like the city council promoting social value, laying out her vision for the city for the first time as leader.

The Meteor asked Craig following her presentation whether proposals like Trinity Islands, which will see developers Renaker build four high rise towers in Deansgate ward, undermined her case for social value. Renaker has forecast £89.3 million in profits while agreeing to contribute a meager £106,000 to build affordable housing off site. Craig replied:

“We can’t in this city have an outwards and ambitious look for what we want to be if we don’t recognise we need to build affordable and social housing, and build the housing that the private sector market wants to build for people to live in.”

Manchester city council passed Trinity Islands last week by seven votes to zero on 17 February, with two members abstaining. Miles Platting and Newton Heath ward councillor John Flanagan, while moving a motion to accept the proposal at that meeting, said he’d “like to welcome the massive investment in this part of the city.”

While appearing to echo Flanagan in defending the need for private investment in Manchester’s property market, Craig insisted that Renaker would contribute significantly to local infrastructure.

“We’ve also secured £10m in terms of public realm work … We’re also working across the city at Mayfield to build Manchester’s first public park in over a hundred years, starting with that as part of the Mayfield development. The Renaker site on Trinity Islands is about 40% the size of that. So that £10m that it costs, which looking at Mayfield is a bit on the mark and on the money I’d say in terms of what it costs to build a park.

“So [Renaker is] building public space, building us a primary school … And there’s £106,000 going into building affordable housing, which we will build elsewhere.”

Craig also highlighted that the city council had secured a “clawback mechanism” if the developers made higher-than-forecast profits. “There’s an ability for a clawback on that. So if their [Renaker’s] profits do exceed what they tell us as part of the quasi-judicial planning process that exists then we can claw that back.”

Craig conceded Renaker wouldn’t build any affordable housing on the Trinity Islands site, but reassured the audience that the city council had plans to build more affordable and social housing.

“We will be bringing forward a housing strategy that will see plans to build over 10,000 social and affordable homes in this city, that isn’t competing against places people want to live in the city centre, but is around building social and affordable housing across the city in sustainable and mixed and integrated neighbourhoods. You’ll see some ambitious plans from that coming forward too.”

Housing campaigners welcomed Craig’s announcement of plans for more affordable and social housing, but indicated developments like Trinity Islands would contribute to ghettoisation in the city of Manchester. Isaac Rose, speaking on behalf of Greater Manchester Housing Action, said:

“We welcome new plans for more affordable and social housing from Bev Craig but the fact is that letting developers like Renaker build skyscrapers in the city centre without onsite affordable housing is creating a segregated city. By allowing a token £106,000 contribution for off-site housing developers will take this as a clear signal it’s business as usual in Manchester.

“We’ve warned for years that the same unfettered flow of real estate finance into the city will fuel gentrification in outlying neighbourhoods and this has now come to pass,” Rose added.

“The city is at a crossroads and we are waiting for the new leader to show us she has the political will to address the housing crisis.”