Show your face and go home: asylum seekers and migrants forced to travel from Stoke to Salford for two-minute appointments 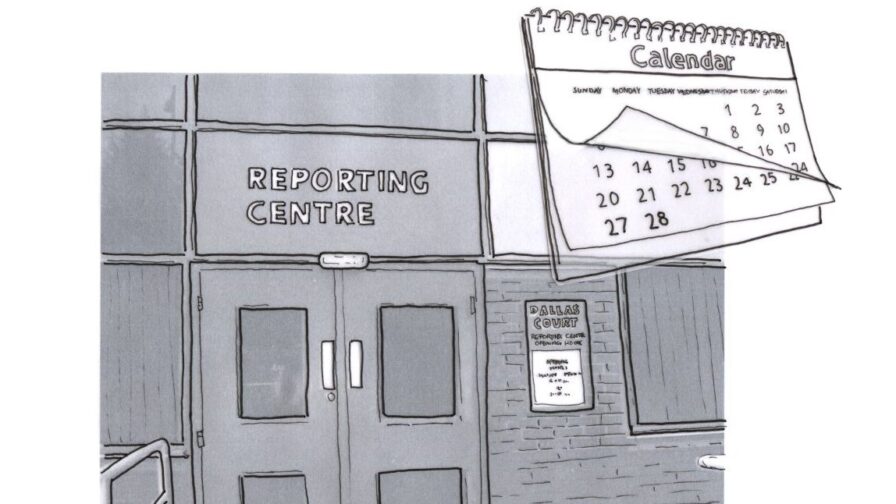 People living in Stoke-on-Trent with pending asylum and immigration claims have been told by the Home Office that they have to report at Dallas Court in Salford – an 80 to 90-mile round trip.

Over 80,000 people per year have to report at their local Home Office reporting centre or a police station. In the past, people living in Stoke-on-Trent reported to their local police station. However, they were recently advised that they had to travel to Dallas Court – with no clear information on provisions for travel costs or childcare.

The majority of people going to report are prohibited from working and are entitled to little or no state support. The cost of a return journey from Stoke-on-Trent to Manchester can be over £20 in bus and train fares, a huge amount of money for people with little or no income. Manchester-based anti-detention activists, from campaign network These Walls Must Fall, spoke to a woman who had travelled from Stoke-on-Trent to report at Dallas Court only to be informed that the frequency of her reporting had been changed from every six months to every fortnight. She had no idea how she would find the money to cover the travel in two weeks’ time – yet if someone misses a reporting appointment, it is often used as evidence that they have ‘absconded’.

Freed Voices are a group of experts-by-experience committed to speaking out about the realities of immigration detention in the UK. Between them, they have lost over 20 years to detention in this country. Mishka, a member of the group, said:

“One of the biggest issues with Home Office reporting is that there is lack of meaningful engagement. Quite often, the reporting event only takes two minutes. People sometimes travel hours to reporting centres just to show their faces and leave. The changes in Stoke mean several hours travel for a two-minute ‘show your face and go home’ appointment’.”

Local support and voluntary groups in Stoke-on-Trent have been seeing first-hand the impact that this change is having. Jude Hawes, a manager at Citizens Advice in Stoke, which provides advice and support to people seeking asylum there, said:

“This is having a massive impact on local services. The Home Office closed the reporting centre without any consultation beforehand. We have some people who are so severely physically disabled, it is literally beyond their capacity to make a journey like this on public transport, from here to Salford. Even if your connections are good, it is nearly a three-hour journey one way. I can’t tell you how shocked and distressed people have been by this.”

Reporting is already often a difficult and distressing experience for people, with many fearing that they may be taken into detention or removed when presenting at a reporting centre. A woman seeking asylum in Manchester who has experience of reporting at Dallas Court comments:

“When they [asylum seekers and migrants] are going for reporting, they get detained from there – that makes it very scary to report. When you go for signing, it makes you very scared before that. So many women, they couldn’t sleep, they don’t eat in the night… When you are going there, sometimes you just want to vomit. It’s a very very stressful time, you know, when you go there.”

For people coming from Stoke-on-Trent, the already distressing experience of reporting is being compounded by the length and complexity of the journey. In a particularly upsetting example highlighted by Stoke’s Citizens Advice Bureau, a man seeking asylum in Stoke, who had no severe mental health problems before he was compelled to report at Dallas Court, attempted suicide due to the distress it caused. He was subsequently admitted to an acute psychiatric ward and was not discharged for a month.

The Independent quoted Immigration minister Caroline Nokes as saying that the move formed part of a wider programme to “rationalise reporting locations to more effectively manage the reporting population”, and that there was no upper limit to the distance a person may be required to travel in order to attend their nearest reporting location.

Whilst it may have been a bureaucratic decision to ‘rationalise reporting locations,’ the human impact of this change is severe – leaving already vulnerable and distressed people desperately trying to find money to make a 90-mile round journey, and local support organisations picking up the pieces.

Lauren is an organiser with These Walls Must Fall

To find out more about Freed Voices click here