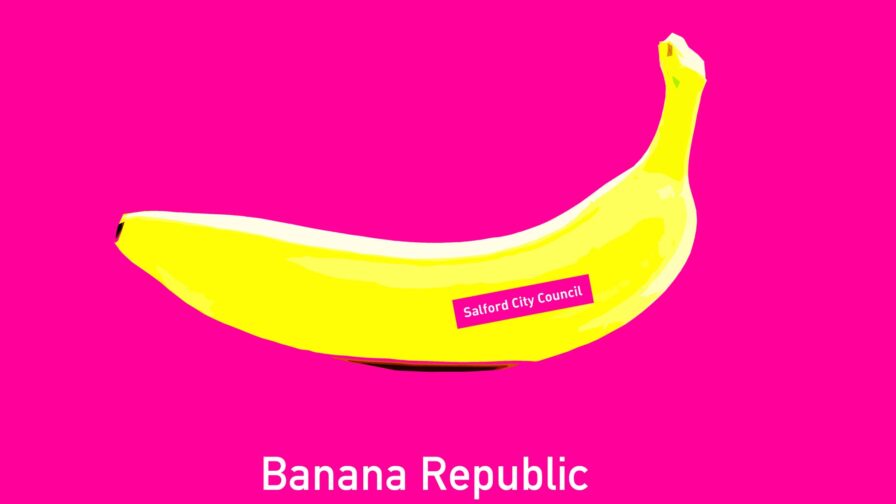 The Salford Star has shut down. This article is a warning to others who may follow, on the pitfalls of founding a genuine publication that aims to give the community a voice and hold public bodies up to account. They will try to discredit you, block information and shut you down.

So it’s May 2009, and Britain’s press are outside Salford Civic Centre as Salford MP Hazel Blears is at the epicentre of the MPs expenses scandal. Someone asks me, as editor of Salford Star, to go live on SKY News talking about the issue. Sure.…

That afternoon, my wife phones me from work in tears. She’s been threatened. Her job as a civil servant could be in jeopardy if I didn’t shut up. Blears, the then Secretary of State for Communities and Local Government, was incredibly powerful and it brought home that the nearer to the centre of power you get, the more you are obliged to play the game. But journalists aren’t supposed to ‘play the game’…

A few months later, and Hazel Blears is in a meeting with representatives of SCMP – Salford Community Media Partnership – about potential funding for media projects related to the BBC’s imminent move north. She said, the reps told us, that no money would be forthcoming for any project that I was involved with. Nice.

Cut to 2012 and Ian Stewart has just been elected Salford City Mayor. He addresses the East Salford Community Committee ranting about ‘extremists’ wrecking the city.Ooooooh. Where? Who are they? Stewart repeats the diatribe at a full Council meeting. Wow! Where are they? Who are they? It turns out he was talking about me and the reps of Salford City UNISON.

Come near to questioning power and they will threaten you, try to isolate you and attempt to discredit you.What was the Salford Star doing that was so extreme? Giving a voice to dissent in the city. What was Salford UNISON doing? Standing up for its members.

And it turns out that the Labour Party Mayor wasn’t just slating the Star and the unions, he later turned on parents of severely disabled children who were protesting about the closure of their respite centre, The Grange, calling them ‘rent-a-crowd’…

Stewart had issued an official press statement saying “better to sit down and discuss any issues like sensible adults, rather than resort to the usual rent-a-crowd placards and megaphones, which do not set a good example for our young people.”

Parents of disabled children labelled his comments “insulting” and “disgusting”…”I, as a parent, think that standing up for children with disabilities is showing a good example” said Margaret Tunnacliffe, a parent of two disabled children attending The Grange.

Under Stewart’s Stalinist tutelage, transparency went out of the window, despite him saying in his inaugural speech that “We as a Council must be more open and transparent with the public…”

Instead, Stewart publicly accused the Salford Star of lies, which we completely shot down in an open letter, while his Assistant Mayor, Gena Merrett accused the Star of being a “key supporter of an extreme left-wing political party that aims to ‘smash The Labour Council and the Labour Party'”.Really? And then added that the “Salford Star has never been one to let the truth or accuracy get in the way of a good story that might help to support these aims”.

Meanwhile, Salford Star Freedom of Information requests constantly took months to answer. It got to the point where the Information Commissioner became involved and put the Council on special report for failing to respond to over one third of requests within the legal limit of twenty days. And Salford Star requests to see invoices and documents relating to Salford Council’s accounts for 2012, as is a legal right, were met by a brick wall for more than six months.

The Council had brought in Labour spin doctor, Matt Finnegan, to the ‘politically restricted’£65,000 post of Council Head of Communications, who then, illegally tried to ban the Salford Star from attending the election count, and finally resigned when the Salford Star caught him politically spinning for Stewart’s favoured candidate to be Salford MP after Blears, Rebecca Long Bailey.

While Stewart was trying to discredit anyone who dared question him, behind the scenes13 ‘Assistant Mayors’ were appointed, and a secret payment of £164,000 to Salford Reds rugby club was exposed, described by the Mayor as a “paperwork error”.

Salford Council continued to attack the unions. This time it was UNISON’s branch treasurer who was hauled before bosses and told he couldn’t represent his members…as he informed them about further cuts to services. The Council backed down in face of protests but the intention was there.

In print issue 10 of the Salford Star (2015) we couldn’t help but produce a Magic Mayor Healing Doll to ‘enthuse’ Stewart with a new vision by offering healing energy. All residents had to do was cut out the healing doll, attach it to a wall or door and put a pin in each of the power points…We don’t think it worked…

What did work, was Stewart getting his favoured candidate, Rebecca Long Bailey, to take over from Hazel Blears as MP candidate. The Star did Long Bailey’s first ever interview before she was elected, with the obvious question….‘We’ve got a lunatic Mayor in charge that we can’t get rid of, and you’re seen as his candidate…Is that a problem?’

By now, Salford Council hadn’t spoken to the Star for two years, so we also asked RBL about this… “Yeah I think it’s sad that people aren’t talking to you because, irrespective of the kind of coverage these people are going to get, at the end of the day it’s important for local politicians to be held to account whether it’s good publicity or bad publicity. If it’s off the scale and it’s mad then fair enough but I’ve read what you’ve got and I don’t think it’s like that…” A couple of years later and she was blanking us in the street, never mind giving comments…

And so Ian Stewart eventually stood down, and Paul Dennett was anointed City Mayor in 2016; with the usual ‘transparency’ noises in his inaugural speech. Were things really to improve under his leadership?

During his campaign to be Mayor, Dennett, unlike all other candidates, refused to speak to the Star. They say that in Salford you can stick a red rosette on a donkey and it would be elected, so we interviewed that ass…

We asked ‘Paul Dennett has pledged that “I will be directly accessible to party members and the public…My door will always be open”…Yet he slams it in the face of community journalists before he even gets elected. Do you think his pledge means anything?’

The Information Commissioner disagreed, and, after six months, the Council revealed that 14 companies with vested interests in the city’s development had paid for the trip. And so it goes on and on and on…but that’s what the Salford Star was here for, to expose this stuff, amongst other things…

The same year we requested land sale details and went through the same process of a refusal, an internal inquiry, the Information Commissioner, and five months later, the information. However this time, by mistake, the Council included an internal log in its response which basically showed how officers had deliberately blocked the request even though it had the information to hand, and even though its own Freedom of Information team had written…

“After discussions with the rest of the FOI team we are concerned that if we do not supply the information to the customer the council is not appearing helpful or transparent which is one of the council’s ‘great eight’…‘We will take action to create a more transparent, effective and efficient organisation (no.7)‘…”

Also in that year, and after Grenfell, the Star requested all emails from councillors and officers centred on the dangerous cladding in Pendleton. At a meeting of the full Council, Deputy Mayor, John Merry, revealed that he and others had gone through the material deciding what could be released. That’s not supposed to happen, it’s supposed to be a neutral process.

Together with loads of blanked out or innocuous emails eventually released was one from Pendleton Together to the Council about the Star’s request for safety information, stating “as per our agreement with Salford Council we did not respond”. Firstly, this was proof in black and white that the Council was blocking organisations from speaking to us. And secondly, hello, this was about safety information to pass onto frightened tenants. How disgusting is that?

Meanwhile, Dennett had employed a £38,000 political assistant, Charlie Winstanley, who again tried to discredit the Star and its editor, accusing me of being a “wretched liar” over an accurate article about the Mayor’s discretionary fund. Winstanley followed this up by telling his own massive lie, writing that the Star was sponsored by my “rich barrister wife”. Not a barrister. Not even in the legal profession. And not rich.

He added that the Star “consistently uses an anti-establishment ‘left’ veneer to publish factional attacks on the left of Salford Labour Party, on behalf of Blairites, careerists, cranks and sometimes even Tories…” Nope. It’s called holding power to account, and being independent with no vested interests…

This is the sort of stuff the Star has had to put up with over the years. We’ve been accused of being Trotskyites, anarchists, Tories, UKIP supporters and anything else they could throw at us…Unless, of course, it suited the Council……

When the Salford Star uncovered a plot by Peel Holdings to try to unseat congestion charge supporter and Labour Party councillor, Roger Jones, the story was re-printed on Labour Party election leaflets in the city. It’s only when you are holding them up to account that the knives come out.

Interestingly, the Star gave a presentation to a national Research For Action last week that gathered together academics, journalists, students and basically anyone who was looking into their local council’s finances and spending.

Every single person who spoke and was actively holding councils to account relayed exactly the same stories as the Salford Star…all had seen information requests blocked, all had seen legal rights to view documents hindered. And all had been labelled ‘extremists’ and ‘trouble makers’ for merely trying to help democracy along its path…

The very sad thing is that over the 15 year lifespan of the Salford Star, local council democracy and transparency have actually got worse. When Donald Trump was pilloried for excluding media he didn’t like, the Star wrote that Salford City Council must have taught him everything he knows…

It really doesn’t matter who or what is in power. If you challenge them; if you try to shine a light on their activities you automatically become the enemy. And Salford City Council and its ruling ‘sensible socialism’ politicians are no different. They are a disgrace.

By The Salford Star

First published in The Salford Star on 17 May 2021

All graphics by Steven Speed