By Guest Writer | 8 September 2017Friends of The Meteor 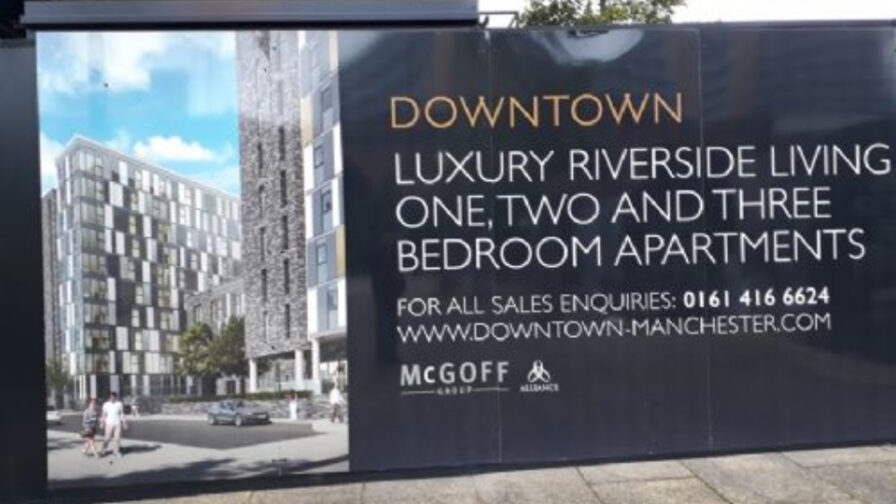 Luxury flats in Ordsall, already branded ‘Downtown Manchester’ by developer, Villafont, are being flogged to the rich in Knightsbridge as investment properties, promising a yield of 7%, with an average price of around £270,000.

When planning permission was granted by Salford City Council two years ago, the developers avoided £1.2million in planning fees and the provision of 75 affordable properties, as the scheme wouldn’t have been ‘viable’ if they had to cough up.

The Monopoly board that is now Central Salford has been re-drawn recently, with more and more developers re-branding Salford apartment and office schemes as being in Manchester.

Nowhere is this clearer than on the banks of the River Irwell in Ordsall, where developer, Villafont, has re-branded its huge blocks of 368 PRS (Private Rental Sector) apartments as ‘Downtown Manchester’, with the city ‘Salford’ not mentioned once on its publicity.

In May, activist artists did a bit of their own re-branding, adding photos of old Ordsall, bulldozers and homeless tents to the ‘luxury riverside living’ hoardings that dominate the site (see previous Salford Star article – click here).

Having re-branded the apartments as in ‘Manchester’, the developer is now flogging them to rich investors in Knightsbridge, who were invited to an ‘exclusive opportunity’ to buy property in the ‘prestigious hotel style development’ by agents Alliance Investments.

The developer states that the first phase has already sold out, which flies in the face of a planning application report submitted to Salford City Council in 2015 claiming it could not afford the £1,221,278 planning fees and obligations, plus the provision of 75 affordable properties, as it would make the scheme ‘unviable’ (see here).

Salford Council duly waived all the fees and demands for affordable housing, issuing a mere ‘clawback’ agreement whereby if profits were high enough it could claim some money back. So far, the Salford Star knows of only one housing scheme where this has happened in Central Salford.

These ‘viability’ get outs can be seen as back door public subsidies for rich developers, and the Star estimates that well over £42million in planning fees and over one thousand affordable houses have been lost to the city over the past few years (see here and see here and see here).

Meanwhile, Ordsall itself has a chronic need for more affordable housing, school places, doctors and dentists, and the area less than one hundred yards away from these apartment blocks is still within the 3%-7% most deprived places in England.

First published in the Salford Star, on the 7 September 2017