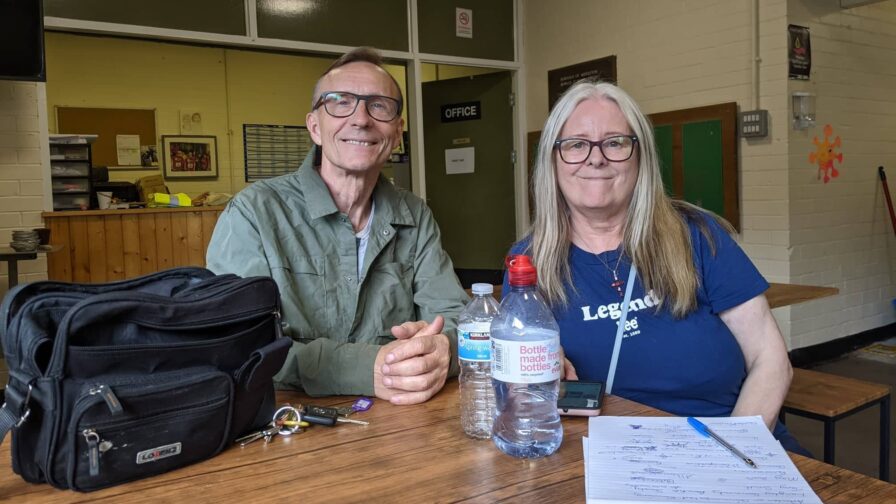 Terry and Sue Smith have set up a housing co-operative to build homes for the community in Langley. 'Rochdale is the birthplace of co-operation. We’re channelling that spirit.'

It is a hot August day, and I’m on the bus from Manchester approaching the lush rolling Rochdale hills. Middleton’s suburban back gardens blend gradually into playgrounds and playing fields, before giving way to the welcoming expansive greenery of Bowlee Park.

I meet Terry and Sue Smith at a pavilion just beyond the park. They stop what they are doing and immediately offer me water to counter the dry heat of the day. They’ve just finished the daily session of the summer school they’re running where they tell me they have taught “60 children today!”.

Terry and Sue have devoted their lives to their local community. Sue is a local councillor, and Terry is a long-standing resident on the Langley estate and a community worker. Last year, they set up the Langley Community Benefits Society, the borough’s first such society with the aim of building community-led housing. If successful the society, which fittingly for Rochdale is a form of co-operative, will see 10 community homes built on formerly council owned land on Langley Estate, near Middleton.

As I’m trying to understand why the pair set up the project, Terry displays a frankness about his past which is both disarming and refreshing. “I’m an ex-offender,” he admits. “If you told me when I was 19 that I would spend most of my life as a community volunteer, I would have said you were on drugs!”

Speaking to Terry informs me of his unshakeable conviction that community-led action can be redemptive, even transformative. “I was all about the money when I was a young man. I landed in prison. But then one day, after I got out, Father Mullins allowed me to fix and do up his dilapidated church. Now, I’m not religious, but–metaphorically speaking–I made a deal with God there at that moment. Nothing in life is easy. You just have to keep working on it. If I can do it, any one of you can too.”

The demise of Rochdale’s social housing

Social housing, which is in decline across Rochdale and Greater Manchester, is Terry believes one of the best ways to realise that positive change. “Before there were around 1,100 social homes on the Langley Estate,” he recalls. But the homes got run down, and Rochdale council then sold them off to developers 25 years or so ago, who said they’d sell them at affordable prices, “they didn’t” Terry says. It’s a common story to other parts of Rochdale; once dominant social housing blocks, destroyed and not replaced.

“Manchester Housing sold off the housing to Riverside Housing Association, who did some great work bringing the housing up to spec,” Sue says. “But then they sold pieces of land to developers who knocked down hundreds of council housing that had been boarded up. They then said they would be building affordable homes, but they weren’t affordable to the vast majority of people who lived on Langley.

“Private landlords were also buying up these new homes too and charging unaffordable rents to local people,” Terry recollects. “They now charge £650 to £750 a month to rent a house, and when people are desperate for a home they will agree to pay the amount these landlords are asking for and this is why food banks are overwhelmed. It creates more poverty. Something has to give.”

Official figures also paint a grim picture. A Futuregov report published last year and presented to Rochdale council’s communities, regeneration and environment scrutiny committee revealed the dire scale of the problem of social housing in the borough. People spent 3,653 nights in B&Bs in 2018-19, the report said, almost four times the number in 2016-17 and nearly six times the national average.

The loss of social housing, where rent is often around 60% of market rate, is not being made up with affordable homes either, which have rents or buying price set at 80% of the market rate. Just 388 new affordable homes were built in the borough through the Affordable Homes Programme from 2012 to 2016. The lack of suitable housing for Rochdale has led to the housing waiting list in the borough nearly doubling over the last ten years from 3,631 households in 2010, to 6,818 in 2020.

Rochdale council has signalled its commitment to reverse this disquieting trend. In its housing strategy for 2017-22, which includes social rent homes under the term “affordable”,  the local authority pledged to “increase the number of affordable new build dwellings including shared ownership,” to “work with the HCA and Registered Providers, developers and investors to deliver additional affordable homes in the Borough… [to] work with Registered Providers and developers in the Borough, to promote the various schemes and initiatives that are currently available to support people into affordable home ownership.”

The council also pledges to explore “the opportunities for bringing forward alternative products and funding to facilitate the delivery of new affordable housing in the Borough.”

The Langley project aims to fulfil this municipal objective of providing more affordable housing by replenishing the borough’s social housing stock. Rochdale council gave land it owned through a Community Asset Transfer to the society for the purpose of building community-led housing on the Langley Estate. Working in partnership with Riverside Housing, Rochdale council and Greater Manchester Centre for Voluntary Organisation (GMCVO), the society will help locals who are struggling to rent, build their own social housing.

‘Rochdale is the birthplace of co-operation’

The Langley project is still embryonic but it could be vital in proving the concept of community-led housing, advocates say. “Rochdale is seen as a pilot because if it’s successful they [Rochdale council] are going to offer more land to community groups,” Tom Hopkins, director of Greater Manchester Community Led Housing (GMCLH) hub explains.

Rochdale council confirmed to me it would like to run more of these projects if Langley is a success. “I’m impressed with the work being done by residents in Langley, headed up by Terry and Sue Smith,” Councillor Daniel Meredith, cabinet member for housing and highways at Rochdale Borough Council, said. “We’ve provided some support as a local authority, but it’s their hard work that has got it to this point. We wish them the best of luck achieving their goal and will continue to support them, wherever we can.

“If other local groups are interested in pursuing a similar project, we’d be open to finding out more about their plans and seeing if we can support them also.”

Terry and Sue are continuing a long Rochdalian tradition of pioneering alternative approaches to doing things. “Rochdale is the birthplace of co-operation,” Sue reminds me. “Have you seen that bridge that says that? It’s about channelling that spirit.

“We’re a pioneering housing co-operative. We’re the first in the Rochdale borough to set one up. Terry and I are the founder members of The Langley Community Benefit Society which is made up of 10 volunteers from our community who have been working over the past 18 months so that we can provide much needed social housing in our community. But now there are more groups of people throughout Rochdale looking at doing what we have done, which makes me feel proud of our achievements.”

She expands on what benefits housing co-ops have in practical terms. “Everything is kept local. People with links to Langley are given homes. We keep families on the estate which otherwise might have been split up—are being split up.

“I feel that by splitting up these families people are losing the support and stability of having your family living around you which made you feel safe and secure. Like in our day the whole street was your family, we looked after each other and each other’s homes. We need this put right and the way to start is to build more social housing in our communities.”

Incorporating as a housing co-op also gives the residents control over the design of the new homes, Sue says:

“We can design the homes just how we like them, we want to skill local people up so they can apply for any of the jobs we create during this project. We have already started doing this by working in partnership with Keep Moat Construction. Local People having a say in who gets the jobs, what our houses will look like, where they will be built, not building on green spaces and who will move into them gives me a tremendous feeling of hope for the future of our community.”

“We are looking at developing a food cooperative that will be based at Bowlee Pavilion. Looking at what we can do to support sports facilities and as we grow, the community will grow together with us.”

The logistics of setting up a community-led housing project

We talk about the logistics of establishing a community-led housing project. “We travelled around the country and attended conferences,” Terry recollects. “It’s all about meeting the right people. After we knew all our options we were then able to say, ‘OK, we’re going to do it this way’. We opted for a partnership approach, formed a committee and put in our own funds.”

They were given a plot of land through a Community Asset Transfer from Rochdale Borough Council last year. They will receive funding from the Resonance Community Developers social impact fund to build homes compatible with the Rochdale Cleaner Air Plan. The homes will be energy efficient, and the group will also include connections for laptops and tablets, and-if the grants stretch far enough –Wi-Fi.

Acknowledging the council’s warm words, Terry and Sue were adamant that this project extended beyond them, highlighting a broader team of experts and residents who have been integral to getting the project off the ground. They emphasised that getting buy-in from senior councillors was important. “Once Allan Brett [former Rochdale council leader] was all in,” Sue says, “everything else fell into place. Neil Emmett, the current leader, has been brilliant too.”

There is still some way to go, the group is currently looking for a project manager and they need to continue to leverage support from various parties, but everyone seems to be on the same page in terms of vision and ambition.

Clearly, there is no time like the present to set up a community-led housing project. “This is the time to do it,” Terry says. “The resources are out there to help you develop a housing co-operative, the time is right.”