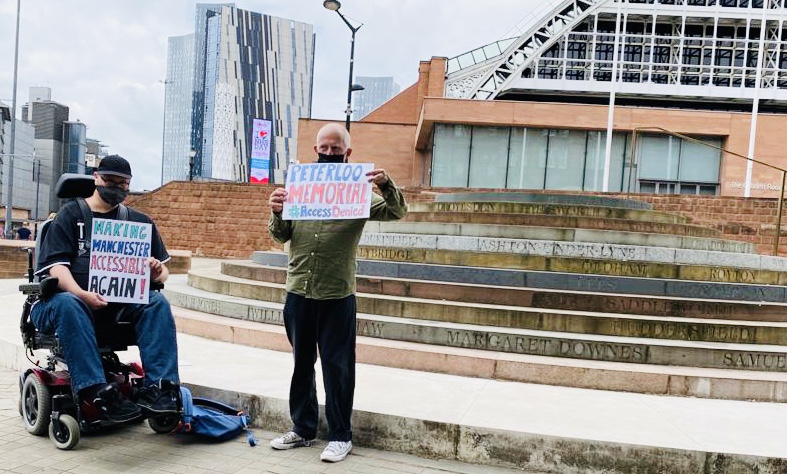 In response to recent news that Richard Leese is to stand down as leader of Manchester City Council, local disabled activist Brian Hilton shares his personal views on Sir Richard and his legacy.

I have only met Sir Richard Leese once, but once was enough. I was struck not only by his arrogance and dismissal of access as an equality issue, but also how he only half-tried to disguise his condescension as fatherly wisdom, as he lectured me and others on what disabled people could and couldn’t have.

Along with a number of other representatives from local disabled people’s organisations, I met with Sir Richard in early 2019, to try and persuade him to postpone the building of the £1million inaccessible Peterloo Memorial, to allow changes that would make it accessible for all.

We tried to explain to him that building a memorial to democracy and equality which purposely excluded disabled people was not a good idea. We pointed out that we fully supported the creation of a fitting tribute to the protesters who, in 1819, were trampled, maimed and killed.

However, we also pointed out that a set of steps with a dodgy hand-rail leading to a planned speakers’ platform just wasn’t cutting it in terms of access and inclusion. And quite frankly, disabled people had had enough of being talked down to.

Sir Richard wasn’t having any of it though, and despite a subsequent raft of bad publicity locally, nationally and internationally, his inaccessible £1million carbuncle was built. Yes, promises were made to retrospectively make the memorial fully accessible, promises that have since been reneged upon.

In defence of their catalogue of errors, Sir Richard and the city council have tried to claim that the memorial was never meant to have a speakers’ platform, or to be climbed.

And yet, back in November 2018 Manchester City Council’s own press release heralded the unveiling of the design which was described by the artist “to be both a gathering place and a platform for oratory” and includes a quote from the council confirming that it is “both a memorial and a meeting place – a useful space from which future debate and peaceful discourse can happen.”

When the council unveiled its plans for the memorial in 2018, they were on public display for a total of three days. Despite the ridiculously short consultation period, many people pointed out the unacceptability of the design, and similar points were made in response to the planning application on the issue of accessibility.

In May 2019, the Peterloo Memorial Campaign issued a statement on the various problems associated with the memorial. They said “The PMC has pressed over many years for a much earlier, longer and more inclusive public consultation process over this public memorial, which would have allowed such problems to be identified and resolved. It is ironic that a memorial to a campaign for democracy and inclusion should suffer from limited democratic participation and leave some people feeling excluded.”

On 16 August 2019 the Manchester Evening News ran the headline: “Danny Boyle joins calls for council to rectify ‘mistake’ over lack of disabled access to Peterloo Massacre memorial”. In that very article the council is quoted as saying “we are committed to making the monument fully accessible – so that everyone can reach the top.”

Musician and activist Billy Bragg also added his voice to the campaign to make the memorial accessible by stating “It’s unfortunate that the proposed memorial for the Peterloo Massacre appears to relegate disabled people to the status of second class citizens. Surely something that symbolises the struggle for universal rights should be accessible to all?”

The irony is not lost on disabled people that we are probably one of the groups most in need of access to a speakers’ platform. Our exclusion speaks to a wider problem in society where our rights and history are often ignored and where our inclusion often comes as an afterthought, if at all.

I still think a permanent access solution is possible, whether from adapting existing designs or from a fresh look at the situation. Unfortunately, there appears to be no political will to make it happen. Sir Richard as Leader of the Council must therefore shoulder the blame for failing to rectify the mistakes he was instrumental in creating.

When local disabled activists talk about our history and past campaigns, we recall the fight in the 1980’s to make Manchester Town Hall accessible. It wasn’t a campaign without contention, without struggle. It involved protests and pickets and meetings and finally agreements.

Ultimately it resulted in the town hall being made accessible, and at the time it was also a very public statement of intent from Manchester City Council that access was a right. The Peterloo Memorial is of equal significance and may well define the future relationship between disabled people and Manchester City Council.

So, if you choose to recall all the undoubted good Sir Richard has done for Manchester over the years, also recall that he used his position to commission a memorial with almost no scrutiny, and then disregarded the objections made by disabled people during both the initial consultation period and subsequent planning application.

Let’s hope the next Leader of Manchester City Council is willing to both work with and listen to disabled people, because quite frankly my experience was that Sir Richard failed to do either.