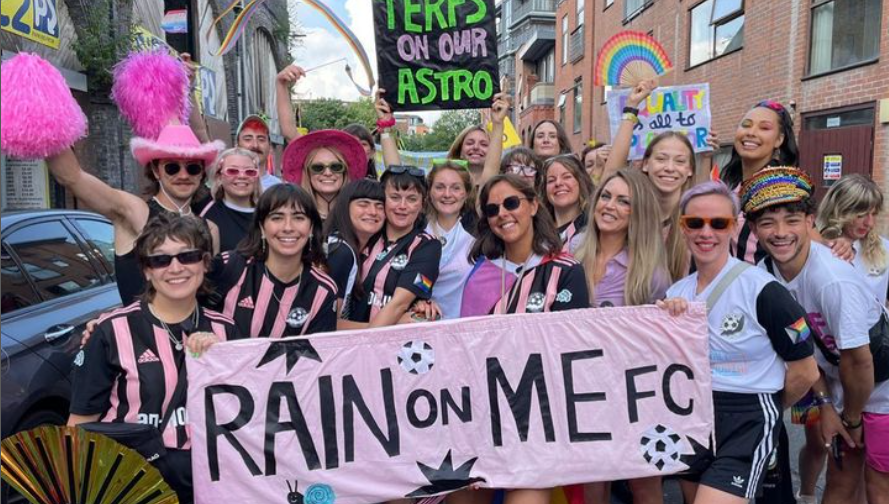 Women playing football is nothing new, but women being paid to play professional football is. Since 2018, professional female footballers earn £47,000 per year, a good sum by anyone’s standards but when compared with male footballers' salaries, it’s pocket money. But it’s a start, and change only comes about when people who care, show it.

Step forward RainOnMe FC, a queer football team that started during Covid to give people the opportunity to have a five-a-side kick about. There are no trials, and as Emily Whyman, the Outreach officer says, “There is no criteria to join as long as you’re not a TERF or a homophobe”. The name of the team isn’t to do with Manchester’s weather or tepid Travis lyrics; they’re named after a Lady Gaga song, which the team ended up dancing to on a night out.

RainOnMe FC seems to be as much of a collective as a football team, and most recently the team committee unanimously decided to boycott the 2022 World Cup. It is entirely appropriate that a queer football team would do this because as Emily succinctly states, “If a lot of the team and community were in Qatar, we wouldn’t be alive or we’d be in jail and that overrode any desire to watch the game”.

During the England v Wales game, RainOnMe FC kicked off the boycott by organising a screening of Bend It Like Beckham at Fierce Bar in Manchester and raised over £300 for Refugee Action. RainOnMe’s stance is one of political and social awareness and at previous events they have also raised money for SafeLives, a domestic abuse charity, and Football v Homophobia.

While professional male footballers sport rainbow-coloured armbands and take one knee to show their opposition to racism, the general culture of football is still questionable, such as where the huge amounts of money in the game come from, as Emily explains: “Sponsors of men’s football rely on things like oil and slave labour, and I know your iPhone contains elements of slave labour but with football it feels very untransparent”.

Another problematic area of football is the male dominance but with the success of the England women’s team in the Euros and the subsequent rise in popularity of women’s football, there is an opportunity for football to become more inclusive. Not only are the tickets cheaper but as Emily says, “The atmosphere at a women’s game is so different to the men’s. I have never been heckled at a women’s game but I have at a men’s game. There are so many more kids, parents and grandmas who go to a women’s game and it’s just a different vibe really”.

The questionable culture and ethics of football existed long before Qatar 2022 but the scale of those poor ethics was well-publicised so that everybody could see how their personal values matched up with football’s. And while there was little question that the World Cup 2022 would go ahead, despite misgivings, there was no doubt at RainOnMe FC that they would vocalise their opposition and show that football can appeal to everybody.