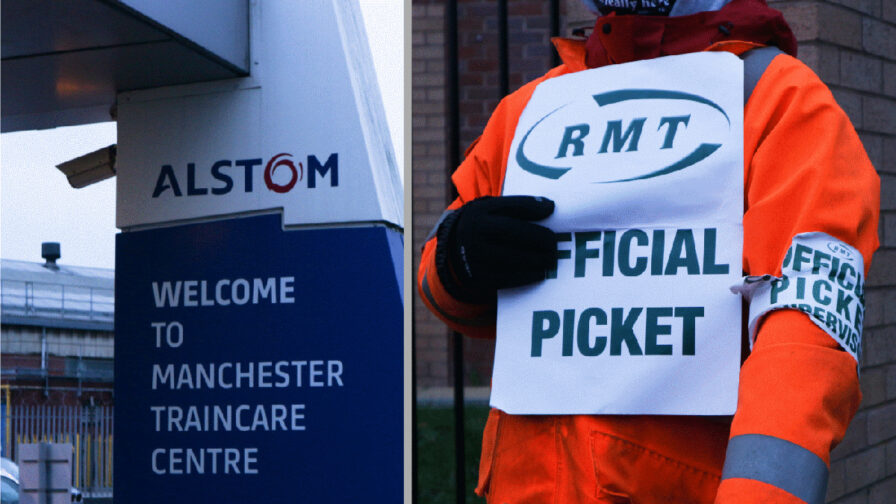 Maintenance staff at Manchester’s Longsight train depot have walked out and are set for multiple 24 hour strikes across December over an international pay freeze imposed by train manufacturer Alstom.

A mass walk-out on 4 December saw over 200 workers leave the Longsight train maintenance depot in a dispute over pay and conditions with their employer Alstom, which has escalated into a national program of industrial action organised by the National Union of Rail, Maritime and Transport Workers (RMT).

Alongside the strike in Manchester RMT members were joined by pickets at five other depots in Chester, Liverpool, London, Glasgow and Wolverhampton.

Alstom is a French multinational firm that manufactures and maintains railway rolling stock which employs more than1,000 workers in depots across the UK.

Pendolino high-speed electric trains are made by Alstom as well as trains used on the London Underground. The company also holds contracts to maintain rolling stock for many rail franchises including Avanti West Coast which operate routes between Glasgow, London, Liverpool and Manchester.

Blaming economic uncertainty due to the Covid-19 pandemic for their decision, Alstom announced a worldwide pay freeze for manufacture and maintenance staff in May.

Representing Alstom’s maintenance staff the RMT say they weren’t consulted and the decision overrode their annual pay claims which were submitted in April. Alstom’s decision to freeze pay will leave its staff with a pay cut in real terms due to inflation.

Despite an initial reduction in sales, an examination of Alstom’s finances reveals the company has increased its orders on the previous year 2019/20. The company has also pressed ahead with the multi-billion euro acquisition of competitor train manufacturer Bombardier Transportation. Despite an initial estimated sale price of €5.8bn – €6.2bn, the final sale will only cost Alstom €5.2bn, a saving of at least €600 million.

Workers on the picket at Alstom’s Longsight depot know what should be done with the extra cash. One picketer who works on the depot’s maintenance team and wished to remain anonymous, said:

“Its a slap in the face that is. We’re losing pay for no reason and they’re just sat on that 500 million [€600 million]. We believe the companies finances are ok and we deserve what we’re asking for, we want to sit down and discuss, they don’t want to even talk.”

Under a series of emergency measure agreements (EMAs), the government covered the loses of rail franchises to the tune of £3.5 bn between March-September. Avanti West Coast, the franchise which employs Alstom received more than £330 million of public subsidy through EMAs. In January 2020 Alstom signed a seven-year deal with Avanti worth £642 million ensuring Alstom a long pipeline of work.

“Alstom is happy to spend €6 billion on Bombardier, that cements their position as largest train manufacturer in Europe. That’s €600 million cheaper than they planned. That money is more than enough to fund a fair pay award for its workers.”

“In this case, Alstom is using Covid-19 to make long term attacks on workers pay. The government’s EMAs ensured they got paid by Avanti. When they announced that pay freeze Alstom pulled the plug on any negotiations.”

“They are a very profitable company which are profiting despite the effects of Covid-19. But our members are determined to fight, they voted for strike actions, we’ll continue until we’ve got justice on their pay.”

Further strike action at the Longsight depot will start from 6 pm on 8 December and continue on the 13, 17 and 22 of December.

Alstom was approached for comment, but had not replied by the time of publication.