Q & A with teacher and union organiser Vik Chechi-Ribiero 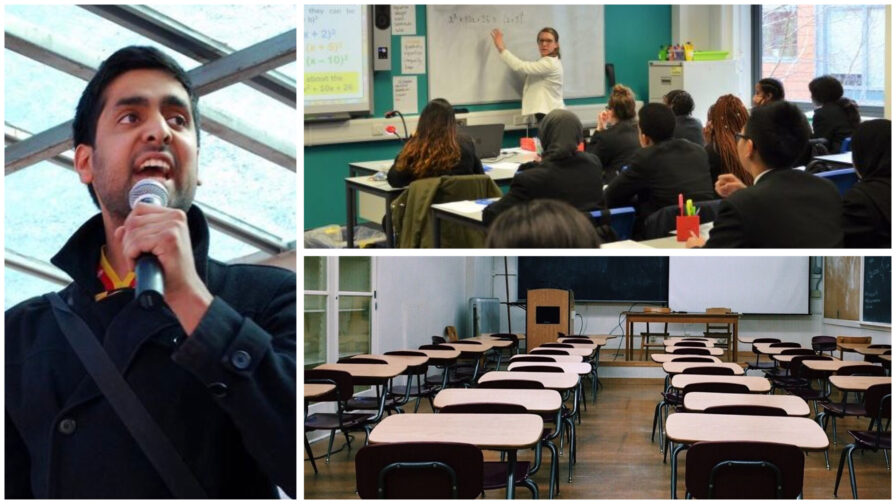 Vik Chechi-Ribeiro is a science teacher at a Manchester academy and  candidate for the National Education Union’s Executive. The union represents over 450,000 teachers and education staff in the UK. Nick Prescott speaks with him about exams, community organising, and the future of education.

In October, we heard that 35% of teacher COVID cases were in the North West. Before then we were being told that the risk wasn’t high; Jenny Harries [Deputy Chief Medical Officer for England] said we’d be more likely to be hit by a car than get coronavirus in schools. We were told there would be a working system of contact tracing. As everyone now knows, that hasn’t happened.

In schools across Manchester It’s been incredibly challenging, we’re in classes of 30 and social distancing is expected. We have teachers who are over 50 and 60, and also staff and students who live with older people and vulnerable people. It’s been an incredibly dangerous time in terms of health and safety.

You don’t just have the day-to-day stress of teaching in a pandemic. You’re also worrying about cleaning and subconsciously watching for symptoms in yourself – that weight is on all of us.

We need a sustained plan within schools. Even with a vaccine it’s going to take months for a substantial roll-out. Even then it’s possible that cases plateau or even increase in the new year after Christmas mixing and lockdown easing.

Wales decided to cancel exams for GCSE and A-Levels in 2021. Scotland has cancelled higher exams for 2021. Why do you think the national government is so resistant to this in England?

The government is ideologically wedded to high stakes testing and exams. The reason is that the current way of assessing learning reproduces huge class inequalities. Paying £21,000 for a private school, you get smaller classes. That lends itself to rote learning – you teach for the test, get good exam grades, and you’ve got a path to Russel group universities and Oxbridge for your students.

This is what worried them in the summer – more working class students with higher grades. That threatens that inequality that exists from testing.

In my year 11 class, some students missed weeks from self-isolating. The government offered to extend the year by three weeks to replace the 4-5 months they missed in year 10 but also they’ve reduced the grade boundaries for everyone. That doesn’t make up the difference in lost learning.

If there’s a second-year where there isn’t GCSEs or A-Levels then people will realise, “Actually, we’re getting on fine without them, there are alternatives”.

We’ve recently reported on Manchester NEU passing political motions in support of community campaigns like No Police in Schools and the work of tenants unions like ACORN and Greater Manchester Tenants Union. Why has your branch taken such a public stand on these issues?

Manchester policing is a particularly live issue especially since the resurgence of the Black Lives Matter Movement. Andy Burnham plans to place 20 police officers in schools. That’s our workplace, we should be leading in arguing against it. Hence our motion that it can lead to the criminalisation of students, it’s heavy-handed and we weren’t consulted.

We’ve focused on uniting workplace and community struggles. We passed a motion in solidarity with tenants unions in Manchester. This was the first of its kind in the country. It included us encouraging our members to join ACORN and Greater Manchester Tenants Union. We’re politicising education workers to see how housing and education are linked in terms of building a better society – how poor housing affects education.

We see this joint organising with community groups as strengthening our workplace organising. What we find is that NEU members who don’t come to our workplace meetings are often brought in by organising on policing, poverty and housing.

We’re fighting the idea that trade unions just talk about pay. They are about developing class power. By getting involved you can transform your life and the lives of others.

During Covid-19 the NEU has grown by at least 50,000 members. The growth is incredible but it remains to be seen whether these numbers can transform into active members. How do you begin to engage these new members successfully?

I was saying all along, ‘We’ve got to solidify those temporary gains’. If it’s just people signing up due to the pandemic, that can dissipate.

I think what would be powerful is more members setting demands – not district secretaries, who don’t work in classrooms, negotiating on our behalf.

We need to take power from the union bureaucracy and put it into the hands of members. Within our branch, we’ve seen people become engaged and active when they feel their power to act. We’ve got to develop our capacity to push our new leadership to be more bold and radical in demands. That’s got to come from within schools.

I’m running on an explicitly socialist platform. At the moment we don’t have enough black members and most black members we do have are in schools that aren’t organised. So talking about decolonising the curriculum and challenging racism is a struggle.

It’s one thing having these big national positions on these issues, but without a strong presence in classrooms, it won’t filter down.

I would set up a black reps training school, develop militancy and workplace presence for black members. I would propose an explicitly socialist political education program with, for example, monthly zoom meetings on issues like imperialism, capitalism, neo-colonialism. Our members need to know how these issues affect them.

In Manchester the issues of housing and policing disproportionally affect black members.

In a black household, you’re more likely to live in poverty. Teachers need to be involved with and understand poverty groups, mutual aid and Foodbanks.

Given the difficult year we’ve had, how do you keep yourself motivated?

This is a necessity, it needs to be done against Covid and the eviction crisis. We’re passionate about building a better future and world, and as teachers to transform education. If working class people have the knowledge and skills to see how the world is deeply unequal, then they can transform it.

It’s also really exciting – the joint organising of housing and policing, and developing the capacity of others is rewarding. It should be fun. Seeing people become more confident and powerful in themselves is one of the best things.