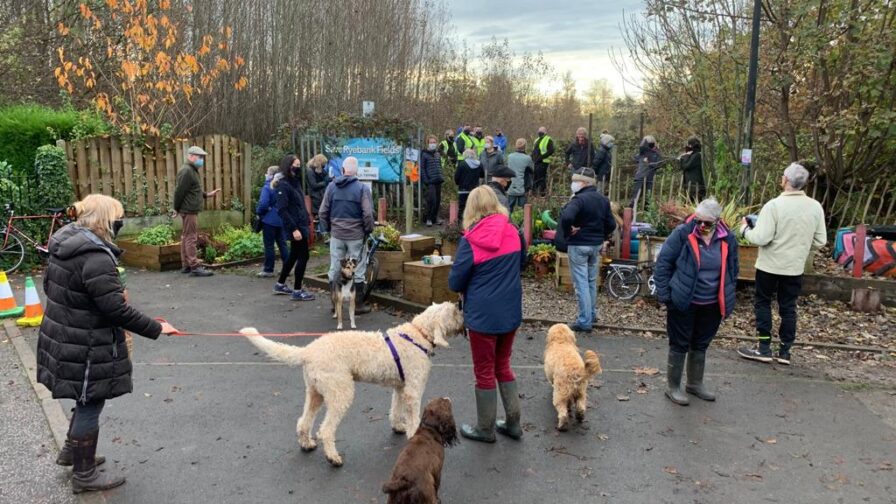 Manchester Metropolitan University workmen attempted to put up permanent fencing around Ryebank Fields yesterday morning allegedly because of the presence of “potentially hazardous material”. Protestors argue hazardous material is buried deep underground, and that MMU’s planned development and resulting disturbance of the land is the real cause for concern.

Ryebanks Fields became the site of a heated standoff between the public and Manchester Metropolitan University (MMU) yesterday, as protestors fought its owners over fencing being put up around the green space.

Local residents gathered at the Trafford end of Ryebank Fields to fight against MMU erecting a permanent fence there to stop people from accessing it.

Residents say MMU security staff and asbestos officials arrived on the site just before seven o’clock in the morning.

Within a few minutes, Friends of Ryebank Fields, a group of local residents campaigning against the development of the green space, had mobilised around 40 people to oppose the fencing off of the land.

MMU staff reportedly had begun to dig holes to build permanent fencing, before activists blocked their access to the holes. Activists allege that the MMU staff had called the police as a result but the police allegedly had had no grounds to tell them to leave because they had a legal right to protest.

The university says it “communicated clearly with local residents explaining why access to the site needed to stop”. However, residents present yesterday told The Meteor MMU had not notified local residents it would be putting up the fencing.

MMU has owned Ryebank Fields since 1972, after Manchester council gifted the site for use as a sports field.

But residents argue that the boundaries of Ryebank Fields with neighbouring Ryebank Road and Longford Park are under dispute. This means MMU is not allowed to put up fencing until it knows exactly what land it owns.

“Fencing the fields off is nothing more than a heavy handed pre-development tactic,” Julie Ryan, founder of Friends of Ryebank Fields, told The Meteor. “MMU did the same thing in 1996/97 when its planning application was refused and they gave up on further planning proposals in 2005 after blocking entrances with huge earth mounds. It is an attempt to block our rights of way.”

The public currently has full access to the fields but the university plans to build more than 100 homes on the site and argues it must close off the land because of the presence of hazardous chemicals like asbestos.

A MMU spokesperson said: “Surveys conducted for us as part of the ongoing process to develop the site showed the presence of potentially hazardous material. This was evidently used in backfilling the site before it came into our ownership.”

“Surface level asbestos was subsequently found in different locations across the whole site. The vast majority of this asbestos has been unearthed due to surface erosion.

“Specialist consultants have advised us that Ryebank Fields must be closed to use by the public until the land is made safe as part of the future development. We communicated clearly with local residents explaining why access to the site needed to stop.

“Unfortunately the fencing we installed has been regularly pushed down and people have continued to access the site. Therefore, in the interests of public safety, we need to install new fencing to ensure that the site cannot be accessed. While we appreciate the concerns of the Friends of Ryebank Fields group, it is disappointing that the contractors have again been prevented from carrying out this important work.”

But residents say that these hazardous chemicals are as much as 40 feet deep underground and argue that the safest thing to do would be to leave the site undeveloped.

“MMU’s own Human Health Risk Assessment states there is minimal risk to the public so long as the land is not disturbed,” Julie Ryan, an organiser at Friends of Ryebank Fields said in response to MMU’s statement. “The site is right next to a primary school and this is a highly residential part of Manchester with narrow roads where they will be transporting toxic waste.

“The most viable and cost effective end-use solution for the land is as a Local Nature Reserve or an Open Green Space.”

As well as increasing the risk of spreading hazardous chemicals buried underground, campaigners say there is also an elevated risk of unexploded ordnances (UXO) on the site. MMU’s own Phase I Geoenvironmental Site Assessment, a test to identify potential hazards on the site, had identified an elevated UXO risk at Ryebank Fields from unexploded World War Two-era explosive devices. MMU had been recommended consequently that it carry out UXO Safety Awareness Briefings “prior to all intrusive works” on the site.

The Meteor understands from residents present yesterday that MMU staff did not provide any evidence to residents that the university had conducted an unexploded ordnance risk assessment prior to its staff visiting the site.

In a statement, Friends of Ryebank Fields said: “MMU is displaying breathtaking cynicism and bad faith by putting up fences around public land…

“We believe they are attempting to dig on the land without following regulations and thereby breaking the law and endangering their own contractors as well as the local communities.”