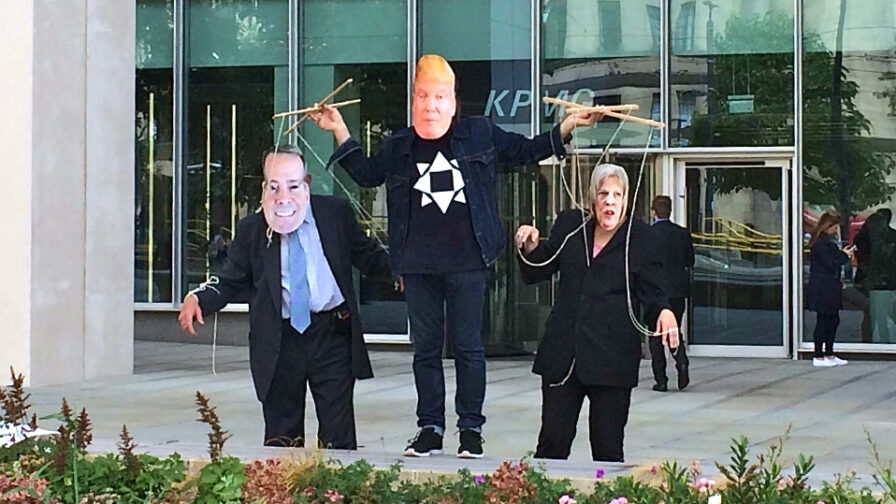 Donald Trump the puppeteer was recently seen in Manchester pulling strings to control Theresa May and Liam Fox (International Trade Secretary) who are both desperate to secure trade deals with the USA due to Brexit looming.

The political satire, performed in Market St and St Peter’s square, was recorded to provide recruiting material for a national mobilisation of campaigners to come to Manchester for the Conservative Party Conference on the 1-4 October.

They will call for Parliament and the People to take back control from powerful corporate interests and their lobbyists, and demand that the UK is not sold down the river in the governments desperation to secure trade deals.

Manchester is famous for championing liberalism and free trade; statues of William Gladstone, Richard Cobden and John Bright adorn the city centre. However concerns about neo-liberalist dismantling of regulations and safeguards that have served poor people and vulnerable communities well, has prompted the formation of the Greater Manchester Trade Action Network (GMTAN). The GTMAN, which organised the Trump puppeteer stunt, is part of the national and international network calling for Trade Justice.

This network links trades unions (including BECTU, GMB, PCS, UNISON and the TUC), environmental groups (such as Greenpeace and Friends of the Earth), Faith bodies and campaigning NGOs (including Global Justice Now and War on Want). They are concerned that the increasingly common model of stitched up trade deals between rich and influential countries, which limit governmental influence and weaken the public sector will be imposed on many poorer and less powerful countries.

Particulary worrying to GMTAN are the secret lobbying meetings that the Deptartment for International Trade has with moneyed interests. Global Justice Now has revealed that 91 % of 318 meetings held by DIT ministers between October last year and March 2017 were mostly with big business. This was to the detriment of small and medium sized enterprises (SMEs) who were marginalised or ignored, as also were civil society groups. SMEs account for 99.9 % of all UK private sector organisations and they employ over 15.7 million people, or 60 per cent of all private sector employment in the UK.

Mike Cherry, Federation of Small Businesses’ National Chairman says that around one in three (32 %) small businesses are involved in overseas trade as an exporter and/or importer, and many employ EU staff so their interest in the Brexit deal is likely to be high.

The Department of International Trade is accused of secrecy concerning its meetings with big business. A similar lack of transparency and accountability is seen in the supposedly ‘exploratory’ working groups set up with fifteen countries. Although the UK is not allowed to negotiate trade deals until after Brexit has been completed there are suspicions that deals in all but name are being set up that can quickly be unwrapped, cosmetically tweaked, and then pushed through with protests smothered by the need to get something in place without delay.

Many are worried that these shady deals seem likely to contain vicious horse trading, threatening the UK’s public services, food and environmental standards, and working conditions in return for favourable conditions for the UK’s financial sector where the issue of flight to the EU is a rumbling threat.

Whilst Theresa May stresses her commitment to an NHS that is free at the point of use, she did not rule out further cherry-picking by commercial interests which would see NHS funds picking up the tab for inefficient private contractors profiting from deficiencies in a revenue-starved public provider. The Economist has expressed doubt over whether US healthcare businesses would want to take on NHS responsibilities. But whittling away publicly provided services, as with the PFI debacle involving Manchester hospitals, is still a distinct possibility.

Liam Fox has laughed off issues like Genetically Modified foods, the routine treatment of American beef with growth hormones and antibiotics, and horrifying animal welfare standards leading to chicken carcasses being washed in chlorine to kill bacteria. He sees them as details to be cleared up after fundamental agreements have been reached. Fox’s strategy was opposed with strong responses from EU and Irish spokesmen as well as Michael Gove, the Environment, Food and Rural Affairs Secretary, who sees the lowering of standards jeopardising the government and UK’s reputation.

“Dangerous deals done in the dark”

During the event in Manchester passers by were offered campaign cards so they could call on Liam Fox to concede sovereignty to parliament in setting a thorough mandate for each negotiation, allow devolved administrations a voice and to ensure deals could be amended and rejected after full debate. They also asked for the ability to withdraw from damaging arrangements such as the now stalled EU/USA Transatlantic Trade and Investment Partnership (TTIP) and the EU/Canada Comprehensive Economic and Trade Agreement (CETA).

John Rooke of Global Justice Manchester summarised their concerns about the hidden betrayal of people as “dangerous deals done in the dark”, he went on to say:

“We want to know whats going on in these meetings, what type of trade deals are being negotiated? We also want our elected representatives in parliament to review these trade deals and set the agenda to what is best for the British people… We are asking people to sign the Global Justice Now petition which asks the government to let us know what is going on.”

President Trump’s enthusiasm for deals with the UK when it has lost EU protections can be gauged by his tweet after our Trade Secretary visited Washington:

Working on major Trade Deal with the United Kingdom. Could be very big & exciting. JOBS! The E.U. is very protectionist with the U.S. STOP!

However, worrying as this may be for some, there is also the menace from more local players.

As KPMG, one of the big four auditors, and Barclays were amongst those given most privileged access to ministers, with 6 meetings each. Due to them hogging the governments ear their prominent Manchester branches in St. Peter’s Square and Market Street were selected as backdrops for the action.

These financial service companies have a vested interest in deregulation and a dispensation which allows increased corporate power to pull strings. Giving them greater scope to control government policies through consultations before legislation is drafted, and strengthening secret and unaccountable dispute resolution processes which trump democratically formulated laws and regulations which impact on expected corporate profits.

Most MPs seem unconcerned. But Afzal Khan, MP for Gorton South, came out against the EU-Canada trade deal CETA six months ago objected to these threats when he was an MEP. More recently he said in exasperation at the prospect of stitched-up deals being pushed past parliament: “I’m an MP, of course I want a say!”

The puppeteer “silly season stunt” illustrated a serious threat to our democracy and society which many are unaware off. The influence of vested interests, corporate power and powerful megalomaniacs over the decisions made by the UK government, are both politically and financially no less serious for Mancunians than those posed by 19th century agricultural magnates and self-interested tycoons. At stake are not only the livelihoods of the majority, but also democratic influence and accountability in the UK.

To find out more about the concerns of GMTAN and take action, click here

Featured image and photos via members of GMTAN and Jonathan Nicholson