Embrace change at a pop-up clothes swap in Greater Manchester 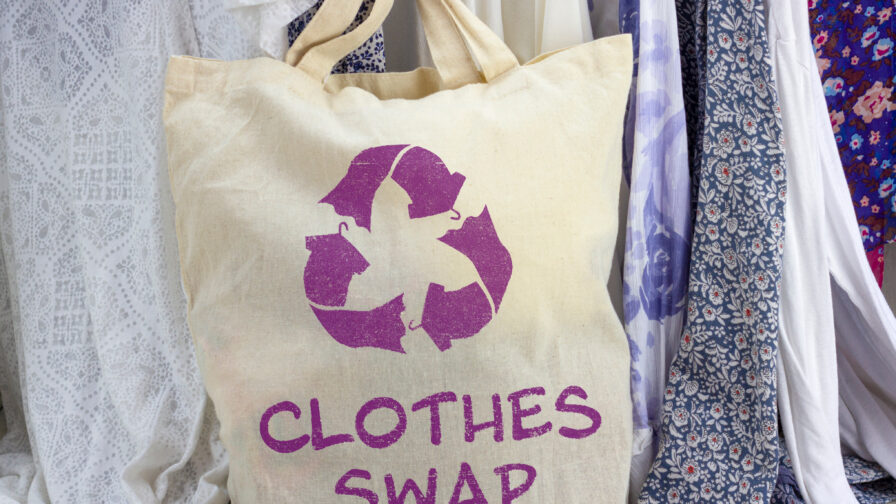 Want to change up your style in an eco-conscious, budget-friendly way? Dress to address change at one of Greater Manchester’s pop-up swap shops.

In Manchester, leaves are now covering the ground, the temperature has dropped and that autumnal feeling of change is in the air. For some, that sense of change might mean rummaging around under beds and at the back of closets for more seasonally appropriate outfits or heading to the high street for some new clothes. But for me, and a growing number of others like me, it means heading to my all-time favourite place for refreshing my wardrobe: a pop-up clothes swap.

What is a pop-up clothes swap?

In the UK, organised clothing exchanges go at least as far back as the 1940s, when the Women’s Voluntary Service helped parents swap their children’s clothes during wartime rationing. Swapping or “swishing” parties, where friends would swap clothes, started to become popular in the 1990s and 2000s, eventually leading to more community-based organisations setting up their own swapping events where strangers can come together to exchange clothing. Some regular pop-up clothes swaps have been going strong in Manchester for years now, though it’s still not a very widespread practice.

Pop-up clothes swaps are often run much like a clothing store, but with a few tweaks. When you arrive, you check-in the clothes you’ve brought (usually a limit of about 10 items) with a volunteer or staff member and in exchange receive tokens or a stamp card to spend in the shop. Clothing is usually hung on rails making it easy to browse, and many pop-up swaps provide changing facilities. You can often find shoes and accessories at clothes swaps, too.

Once you’ve “shopped”, you check-out your new clothes using your tokens and go on your merry way, with a newfound sense of chuffed-ness at what you’ve managed to find, in my experience.

Most swaps charge an entry fee, which in Manchester is usually around £3-5, but some are free or donation based.

Why do people swap?

Ethical and environmental concerns are a big motivator for many who attend swapping events in Manchester, which is particularly relevant for Manchester, given the large role the city plays in today’s fast fashion industry. Keeping existing clothes in use can make a difference – according to sustainability organisation WRAP, wearing clothes for just an extra nine months can reduce their water, waste and carbon impacts by 20-30% each, saving £3 billion in resources used to supply, launder and dispose of clothing.

Sustainability was the main issue that motivated fashion co-op Stitched Up to start running clothes swapping events in Manchester. Sarah, who started volunteering with Stitched Up in 2016, explained: “We started our swaps so that the people of Manchester could keep their clothes in use – even after they didn’t want them anymore! Which ultimately diverts perfectly usable and lovely items from unnecessarily ending up in our overflowing landfills.”

Stitched Up have been running swaps in Manchester for around a decade, and have seen the movement change and grow over time.

“We were reminiscing about our swaps recently – Bryony, a co-founder, found a poster for one of the first ones we ever did, about ten years ago. The team loved running those events. Sometimes we’d only have around twenty people, but they were Manchester’s hardcore sustainable fashionistas!” said Sarah.

“Since then, we had bounced around a few venues across the city, and hosted them in our Chorlton HQ. Pre-pandemic we’d really found our groove, hosting them monthly at St Ninian’s church in Chorlton. They were very well attended with at least 100 visitors each month. Our core group of loyal swappers were always there (we love you guys!) but there were lots of new faces each time too, which we always love to see.”

Stitched Up’s last swap took place in the beautiful Stretford Public Hall, and their next one will be at the Methodist Church in the Northern Quarter.

A more recent addition to the local clothes swapping scene is Partisan, a Salford-based community space in Greater Manchester who started running swaps in 2019. Helena, a member of the collective, also raised sustainability as one of the reasons for running the swaps at Partisan. “Changing your wardrobe doesn’t have to be a massively unsustainable thing to do. It’s natural to want to change your style and evolve – this whole capsule wardrobe phenomenon is great at all, but it’s not for everyone. Some people just want to mix it up,” they explained.

But sustainability isn’t the only reason people might choose to swap – clothes swapping is also a way of keeping fashion affordable.

“We ask for voluntary donations on the door but if people can’t afford it, then they don’t have to pay it. The whole point of clothes swapping for us is making it accessible for people that want new clothes, that maybe can’t afford to buy them,” Helena said.

This focus on accessibility and inclusivity is also something Partisan are conscious of in other areas, as Helena explained: “We don’t separate menswear and womenswear – and we set this out being specifically for people who want to play with identity presentation or maybe just want to try some stuff out.”

Partisan aim to hold their swaps every two to three months, roughly in keeping with the UK’s seasonally changing weather. Helena pointed out the fact that “we’re not equatorial in this country, so our fashion and moods change definitively throughout the year.”

The changing nature of swapping

Despite all of its advantages, the thought of gathering in a public place to swap pre-worn items with strangers may not appeal to everyone in our current context.

Lucie Počinková is a researcher from the University of Manchester who looks at clothes swapping practices in the UK. Based on her conversations with swappers before and during the pandemic, there have been mixed responses to how Covid changes might impact swappers’ experience. “It depends on the organiser, but part of the atmosphere of most of these events, at least pre-pandemic, is fast-paced, where people talk to each other, and there’s this social element to it. That’s been really important. And I wonder whether this might not be there as much just because Covid has made people wary. So it depends how these events are now are going to be organised,” Lucie said.

Both Partisan and Stitched Up made changes to the way their swaps were run after this year’s lifting of restrictions meant they were able to resume swaps, including limiting numbers, staggering entry times and encouraging mask-wearing.

“I’ve had some respondents mention to me that they’d love it if swaps were slower-paced and calmer, and then then you’ve got the opposite when people say, well, actually, I love when it’s a rush, when you really feel like you’re treasure hunting,” explained Lucie.

Despite the measures taken by organisations to make their events Covid-secure, some still may not want or be able to attend in-person swaps just yet. But for others, it has been the very experience of the pandemic that has prompted a need for change in their style.

Speaking at a Partisan swap this summer, Helena said: “Since Covid, people have undergone a lot of change. People’s bodies have changed, people’s gender presentation and identity have changed. So the idea of this event was to open up for everyone to just bring all the clothes that they just don’t feel like represent them anymore and try and shake that up a little bit in a sustainable and a budget-friendly kind of way.”

Having attended local swapping events both before and after lockdown, there are certainly differences, though I would fall into the camp that actually prefers the slower, calmer swapping experience. But even within a more controlled environment, the sense of community I have always felt at swapping events does not seem to be going away any time soon. This is something Lucie highlighted as a central aspect of clothes swapping, saying, “you’re with people who share the same values, whether that’s from an environmental perspective or a social perspective, or because garment workers are being exploited, so they really just want to stop shopping for fast fashion.

“This whole sense of community is such a big feature within swaps, and so many people raise that as such a benefit of the swap.”

You can find out about Partisan’s upcoming swaps, other events and how to support them, including becoming a member of the collective, here

You can find out about Stitched Up’s upcoming swaps and other work including clothing repair workshops, here