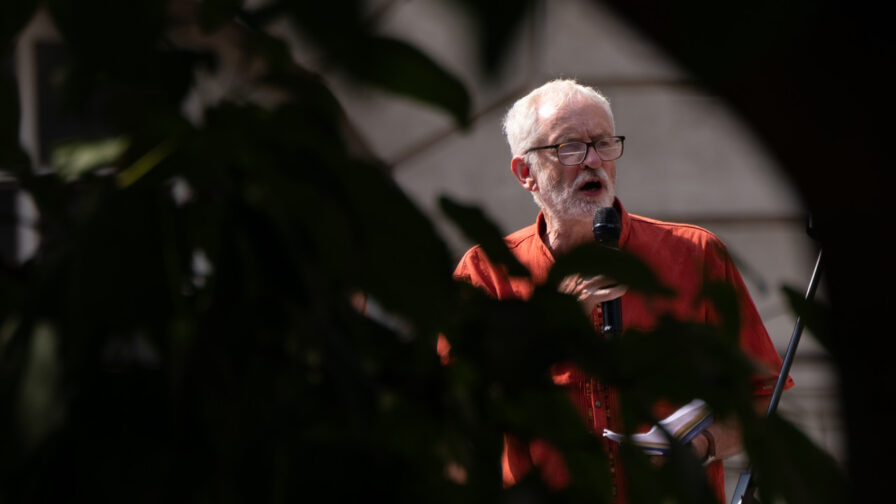 This year's Peterloo rally made connections between the political struggles of the past and the present, yet many Mancunians remain unaware of the significance of this democratic protest.

Even though 203 years have passed since 18 people were massacred  and more than 600 injured by government forces in St Peter’s Field in Manchester, at a site now occupied by the Central Library, the Midland Hotel and St Peter’s Square, it still came as a surprise for marchers to see the blank faces of enquirers when they explained their reason for marching under the midday heat of last Sunday, 14 August.

This march, numbered in hundreds, far fewer than the 40,000 – 60,000 that attended on that fateful day in 1819, was well served by the ‘big hitters’ of the leftist movement. And yet the marchers seemed to be dominated by those of advancing age, rather than the youth of today. Although this may have been due to the lure of the Manchester Caribbean Carnival taking place at the same time in Alexandra Park, as well as the continued travel disruption due to strike action.

The march proceeded from Piccadilly Gardens, passing bemused shoppers on Market Street, along Deansgate before returning along Peter Street to St Peter’s Square where a rally was held with the speakers stood atop a fire engine used as a platform in front of the Central Library. The intensity of the sun was somewhat mitigated for the gathered crowd by the welcome shade of the mature trees that now adorn St Peter’s Square.

However, the rising heat did not seem to curtail the fervour of the speakers as they launched a critical onslaught on the record of the Tory government’s inaction on the cost of living crisis, workers’ rights and the climate crisis, with due reference to the historical connections of the events of 16 August 1819.

Audrey White’s recounting of her struggle in the 1980s against sexual harassment in the workplace had particular resonance with today’s #MeToo movement. However, as with many of the speakers, her criticism of political leaders was not constrained to members of the Conservative Party. It would be a fair assessment that the speakers and the listening crowd were no supporters of Keir Starmer, with every mention of his name initiating a spontaneous booing.

Film director Ken Loach also expressed his support for Corbyn and called for a reset within the Labour movement when he took the platform, a party he joined in the 1960s.

“We had a moment of hope with Jeremy Corbyn and John McDonnell. What we achieved was the beginnings of a programme to change the balance of society towards the working class.

“Radical ideas for change such as common ownership and the Green New Deal had “scared the ruling class shitless just like in 1819”.

Again the right wing of the Labour Party came in for the fiercest criticism with blame for the demise of Corbyn’s leadership, via accusations of “Lies, smears, abuse and personal attack” being laid at their feet.

Mr Loach finished by describing the current Labour leader as “the most feeble dullard of the lot” while referencing past leaders of the party and calling for “a step change to have an independent Labour movement” which was greeted with much applause.

Following the rousing previous speakers and the reception from the crowd it would be safe to say that when Jeremy Corbyn took the platform he knew he was on very safe turf. The traditional “Oh Jeremy Corbyn” rang out as he took the microphone and began speaking.

Mr Corbyn started with a homage to those that had come to protest at St Peter’s Field in the interest of workers’ rights for “justice, peace and hope”. He called for more attention to be made to other actions in the struggle for social justice in history citing such events as the “Cinderloo massacre” in Shropshire in 1821. This event, where two striking miners lost their lives via the government Yeomanry with another hung for his participation in the disturbance, derived its name from the earlier events in Manchester in 1819.

He explained the need for the education of today’s youth so that they can understand the sacrifices that were made to bring about the changes demanded by the working class movement.

Mr Corbyn then moved on to today’s struggle to preserve these hard-fought advances and fight against “the reduction in working class living standards”. Sending solidarity to those unions currently undertaking industrial action, Corbyn spoke of “a summer of hope” sensing the public mood was broadly in support of those striking due to the increasing cost of living crisis. He called for “solidarity” for today’s working class movement as well as his support for Stella Assange in her fight for her husband’s freedom from imprisonment for “telling the truth”.

This was classic Corbyn using historical lessons to call for systemic social change for a fairer society whilst also resisting the temptation to attack his much-maligned successor at the head of the Labour Party. Perhaps he sees a way back, although recent comments from the current leader suggest this won’t happen any time soon.

Actors Julie Hesmondhalgh and Maxine Peake both gave powerful recitals highlighting the struggle for working class justice and recalling the events at Peterloo. The rally was supplemented by music from live acts with suitable working class anthems and additional speakers including Mohammed Shafiq from the PCS union, who again reiterated a call for a national strike in September.

Alan Davies from The Word newspaper who co-organised the event with Oldham Trades Union Council said “The overall message of the day is that socialism is far from dead. Thousands are looking for hope”.

Following the rally a panel forum was held in Friends Meeting house where the audience quizzed panel members including Jeremy Corbyn and expressed their own views as to the struggles that lie ahead for the movement.

Perhaps though the most poignant moment that linked the events of 203 years past to the present-day was the stoic introduction by Stella Assange prior to the showing of the film about her husband Julian’s incarceration. Stella had spoken earlier in the day from the platform whilst the crowd saluted her courage by holding The Word Newspaper aloft with her husband’s image. She described how she and her two young children had to suffer the indignity of being searched every time they visited Julian in Belmarsh Prison. Julian’s ‘crime’, she explained, was exposing crimes. Amnesty International draws a similarity between Julian’s case and the British government’s attempts to prevent the publication of Thomas Paine’s ‘The Rights of Man’.

As Mr Corbyn alluded to in his speech on Sunday, we ignore lessons learned and freedoms won from history at our peril.