Peterloo graphic novel published as witness to a massacre 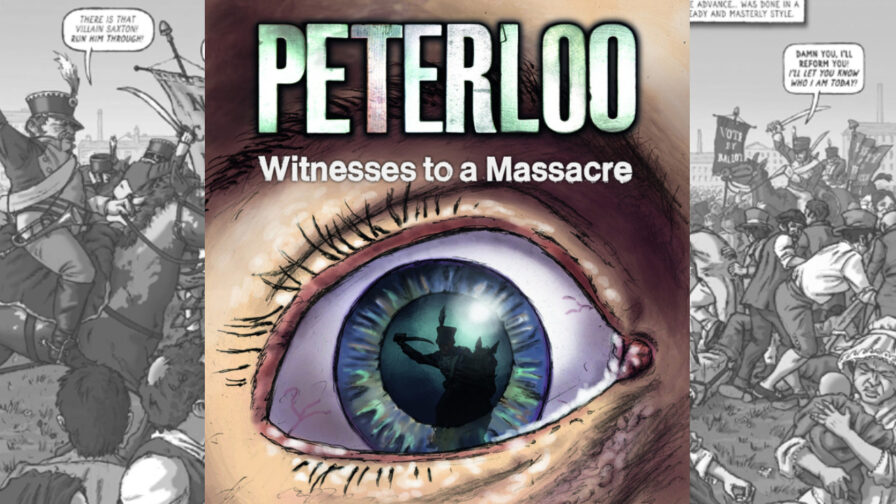 Amongst all the Peterloo 200th anniversary events happening this year, a new paperback graphic history, with stunning artwork and verbatim quotes from those who were there, shines out…. “We decided to just get out of the way and let the voices of the time speak for themselves” say the authors.

This August sees the 200th anniversary of the Peterloo Massacre when at least fifteen people were killed and hundreds injured at St Peter’s Field, Manchester, as the cavalry charged into a peaceful human rights protest.

To commemorate the anniversary, political cartoonist Polyp, historian Robert Poole and artist and writer Eva Schlunke have produced a graphic paperback book, Peterloo: Witnesses to a Massacre that has been hailed by Maxine Peake for its “amazing artwork” and “powerful testimony to the 1819 massacre”.

It tells the full story of Peterloo, from the context of the time – “only ten per cent of the male population were eligible for the vote”, while the “much hated Corn Laws raised the price of bread beyond the reach of the poor” – to the reformers who tried to change conditions and the Manchester and Salford yeomanry cavalry which claimed “to defend towns against insurrection”…

The book and accompanying artwork detail the first protest meeting at St Peter’s Field in January 1819, to the actual fateful mass gathering on 16th August where the cavalry charged into the crowds murdering unarmed campaigners in what became known as the Peterloo Massacre… “Defenceless women seemed more particularly the object against which their hostility was directed” wrote the Leeds Mercury at the time.

Meanwhile, the authorities were adamant that such a protest would never happen again, introducing a whole swathe of acts against ‘misdemeanors’ and ‘seditious meetings’, while new newspaper and stamp duties were introduced, as the editor of the Manchester Observer, his family and staff were given fines and hard labour punishments.

What happened in future years was that ordinary people did get the vote, and Peterloo has gone down in history as one of the worst atrocities ever committed on the English working class.

The authors make no apologies for the verbatim text used in the book…”We had thought about writing our own dialogue, and creating some fictional characters to guide people through the story, but it all started to feel really contrived and fake” they explain “As we were reading all the genuine source material, from weavers, plasterers, charwomen and all the way through to the Prime Minister, it was all so vivid and intense, and so character rich, we decided to just get out of the way and let the voices of the time speak for themselves.

“We did make some minor edits to the text, though, where old phrases no longer made sense, but without altering the meanings” they add “Some of the voices feel really modern and fresh. One of the weavers says of the yeomanry cavalry ‘One could hardly sit on his horse, he was so drunk. He sat like a monkey’. We can’t see any reason why young people won’t engage with stuff like that, particularly if the visuals are intense and dramatic…”

So why did they adopt a graphic book style? “Well I guess budget was a factor” says Polyp “By drawing it we could create some major crowd scenes for no real cost other than time and pencil lead. We wanted to tell the story in a vivid, accessible and realistic way, and visuals seemed the right route when combined with all the amazing accounts we had. But it also allowed us to have multiple voices, with wildly different attitudes, all speaking at the same moment, creating what we hope is a quite haunting mosaic.

“All the period images from the time have a strange theatrical stiffness to them, which can be quite alienating, and so we wanted to create a very modern, realistic look for the same scenes, a look that bought it all back to life for a modern audience, with realistic body language and so on” he adds.

A lot of the action drawings are based on modern photos of conflicts, and the authors challenge readers to spot them. There is one particular scene of a cavalryman chopping down a campaigner with his sabre, that’s reminiscent of a baton wielding cop at Orgreave – and there’s lots more.

Even though the Peterloo Massacre has been subjected to much research, certain revelations uncovered during the book’s creation astonished the authors…

“The fact that Manchester was so small in 1819 was a surprise” they decide “St Peter’s Field, aka G Mex, was kind of on the edge of town. The knowledge that those in control knew the people they were attacking gave it all a really creepy, claustrophobic edge.

“The role of the high church was a surprise” they add “Manchester at the time was a weird mixture of a free trade zone and a theocracy, in which ‘clerical magistrates’ often seemed to be telling the military what to do. The hostility with which The Guardian newspaper was greeted by some radicals when it took the place of the persecuted radical Manchester Observer gave us a jolt. The Manchester and Salford Advertiser described it as ‘The foul prostitute of the worst portion of the mill-owners’.”

While there were many villains at Peterloo to choose from, the authors reckon that the Reverend Hay stood out, while reformist orator Henry Hunt gets a better press here than in Mike Leigh’s recent film…

“We really wanted to do a ‘warts-and-all’ portrayal of the people involved, but despite this, Sam Bamford, the grass-roots reformist weaver from Middleton, shone out as a absolutely amazing bloke” they acknowledge “The book is so full of repulsive villains it’s impossible to choose from them, though the Reverend Hay was a very strong contender for his pompousness, his arse kissing, his willingness to spew propaganda and his indifference to the suffering of others. A grotesque man with no redeeming qualities we could find.

“We’ve gone a bit easier on Henry ‘Orator’ Hunt – the key speaker of the day- than Mike Leigh did, with us emphasising his dedication and courage, but it was hard, reading his words, to miss the big streak of ego he’s become known for” they add “At times he was hilarious in his self-regard…but the guy did time for the cause, and could have just remained a frivolous gentleman had he wanted to. He genuinely cared about the working classes.”

Last year, the book’s creators invited people to financially support the venture in return for featuring in the actual published scenes, amongst other rewards, and some are featured in the finished work…

“Although we had a publisher, New Internationalist and Myriad, we had to run a crowdfunder just to make sure we had enough to live on for the year it would take to complete, while turning down other jobs” they explain “There are about five major backers featured, one of them being a Peterloo Memorial Campaign friend and stalwort…

“We’re proud of the fact that it was a real group effort, and those who backed us to any amount should quite rightly take a bow” they add “Previous Peterloo commemorations, for example, Sam Bamford’s memorial and the, now lost, Henry Hunt obelisk were done the same way, as ‘public subscription’, so we felt we were continuing a tradition from the era.”

Peterloo: Witnesses to a Massacre is now on sale, and is going to be specially adapted for schools in the near future with a much shorter, free-to-download version that focuses on one family going to the St Peter’s Field rally. It will be available soon here.

First published in the Salford Star on 10 June 2019

Peterloo: Witnesses to a Massacre