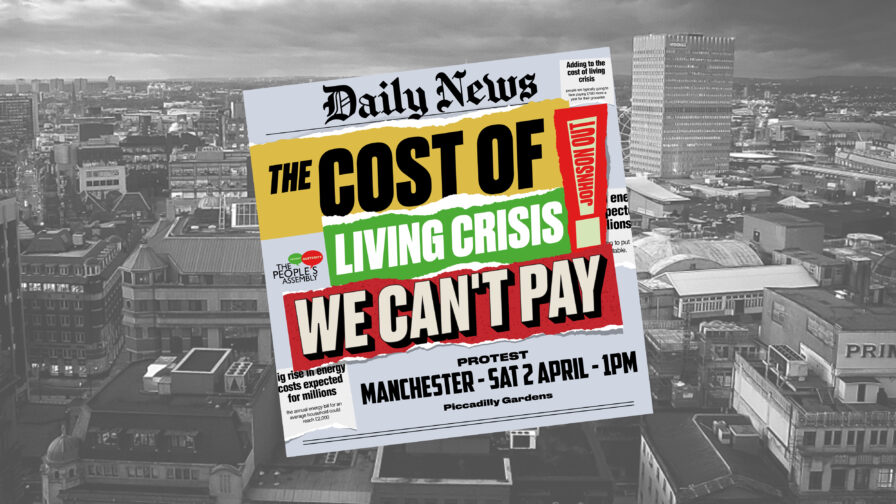 Protest march on 2 April starting in Piccadilly Gardens, forms part of a national day of action against the cost-of-living crisis. Organisers say, “We need urgent and significant intervention and it’s crucial we come together in unity to fight against all this.”

The increasing number of people experiencing the cost-of-living crisis have the opportunity to vent their outrage at a protest march in Manchester on Saturday.

Organised by the Manchester branch of People’s Assembly Against Austerity, the protest starting in Piccadilly Gardens at 1pm, is part of a national day of action which will see marches taking place in 25 towns and cities across the UK.

The crisis has multiple factors feeding into it. The cost of many globally traded goods has risen due to the pandemic, and the Russian invasion of Ukraine has resulted in substantial increases in the cost of energy. Household gas and electricity costs are expected to rise by 54% on Friday taking the average cost of household energy bills to £1,971, which is predicted to force millions of households into fuel poverty.

The average cost of a litre of unleaded petrol has increased to 163 pence/litre and food prices have risen at their fastest rate in eight years. These price increases have contributed to the UK’s inflation rate reaching 6.2% in February, with the Bank of England predicting 8% by spring. The Office for Budget Responsibility predicts that UK living standards will fall at the fastest rate since the mid 1950’s and disposable incomes will on average decrease by 2.2% in 2022-23, as stagnant wages fail to keep pace with inflation.

A spokesperson for the People’s Assembly said:

“The Cost of Living Crisis is having a horrifying impact on people’s lives, with millions being driven into poverty and many into total destitution.

The Tory’s spring statement offers nothing to those who really need it… Other countries are responding to the crisis in better ways than the U.K. For instance, in France, the government has capped energy bill rises at 4% and Portugal has not imposed any rise.

“We need urgent and significant intervention and it’s crucial we come together in unity to fight against all this.”

The march on Saturday will also see the RMT Union taking part to protest the sacking of 800 P&O ferry workers. The general secretary of the TUC, Frances O’Grady, said the government urgently needed to provide more support to those affected by the crisis:

“With energy bills set to shoot up by £700 next month, and by hundreds more in the autumn, many households face being pushed into the red. Ministers must do far more to help people get through this cost of living crisis. The support announced so far by the chancellor has been little more than thin gruel.”

The People’s Assembly call on the government to tackle the crisis by implementing a wealth tax, freezing energy prices, increasing wages, increasing benefits, and investing in publicly owned low carbon clean energy in the UK.