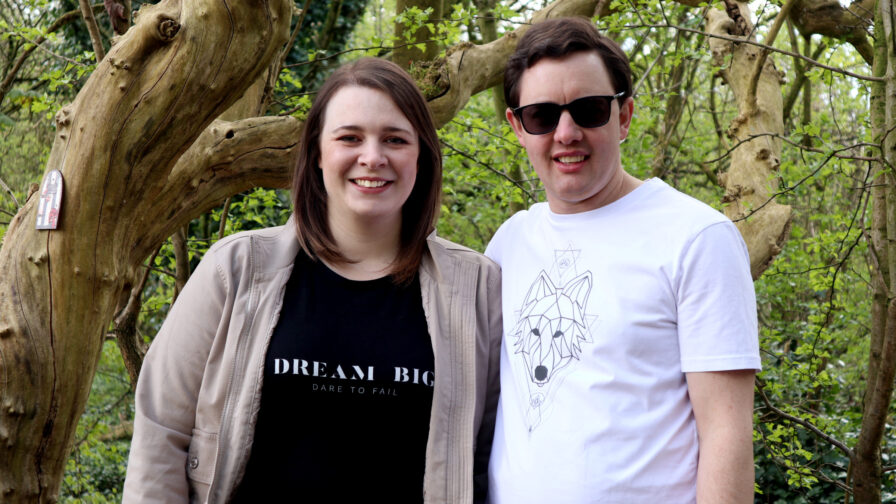 Early 2021 saw two University of Salford graduates, Manchester-born and raised Abby Cassady and her husband Matt Cassady, launch Orior Apparel. The couple’s love of the great outdoors and a passion for design led them to create a clothing company that put sustainability and ethical procurement high on the agenda, in a line of clothing influenced by the Manchester music scene.

Matt, who is originally from Swaziland and moved to Manchester in 2000, said the pandemic restrictions proved to be a catalyst for their plan:

“During the lockdown and her maternity leave Abby started to draw a lot, and the idea just emerged. She did a drawing one day and I said ‘that would look really good on a t-shirt as a design’ and then realised that there’s an idea here,” Matt said and added:

“We love nature and being outdoors, which is kind of the backbone of the inspiration for the designs. Then through my architecture I really like geometric designs, so that plays a big part in marrying the two together: the nature and the geometry.”

While all the clothing is made from certified organic cotton, produced in a “Fair Wear” factory in Bangladesh, the designs are printed in their workshop in Newton-le-Willows using water-based, vegan ink.

“The workers get a fair wage and a lot more rights. There are eight principles, and the workers are looked after. We know that the workers in this factory are being treated much better than in other factories so that’s really important,” Matt explained.

“I was kind of hoping we could get cotton produced more locally. As that factory is in Bangladesh they have to ship it over. And we’re hoping that by now there would be more local producers, even if not in the UK but in Europe, but we’ve struggled to find any organic growers in Europe.”

In an extra boost to Orior’s sustainable credentials, for each purchase of Orior clothing the Eden Reforestation Project plants a tree; the project has planted over one million trees already. Abby and Matt’s love of trees and the desire to see reforestation of land to help combat the climate crisis was a major inspiration for the business. In their packaging, Orior currently uses the minimal amount of material, which is recycled and reusable and their printing studio is powered by renewable energy.

While their tree planting project is currently on hold because of the Covid pandemic, Abby and Matt are focused on building their audience and customer base on social media through blog posts and marketing.

Matt, who used to work for the National Trust, dreams of planting trees in Lyme Park in Stockport and Heaton Park in Manchester, and “ just at places where people can go. Even if we could just turn some brown belt land, that would be a real dream. Where we could create a new planting area or a park area along with the local authorities in Salford and Manchester, that would be awesome.”

Abby spoke of how she would like to promote greener urban environment, “with my architecture side I see that at a lot of the schemes and a lot of the new builds they have put a green space but it’s normally just a patch of grass and left like that. So adding value to those sort of spaces would be great.”

Swaziland is the country Matt is originally from, he moved to Manchester in 2000 shortly before commencing his studies at the University of Salford. Matt is keen to keep working with the University, he said:

“I wanted this to be something we can keep going back to Salford University with. We want to give Salford students, especially towards the end of year shows, the opportunity to come and work with us and give them a bit of a launch platform.”

As for peer support among the Manchester start-up community, Matt said the reception has been positive: “It’s been fantastic overall. Every now and then someone will say that they need an accountant or a designer and it’s been amazingly positive and I’ve actually not experienced any negativity yet which is great because social media can have the ugly side.”

Another dream partnership for the couple would be with the Greater Manchester Night Time Economy Adviser Sasha Lord. “We’re big fans of the Manchester music scene and doing something with Sasha Lord would be fantastic. Obviously he’s got the Warehouse Project and Parklife. I actually had a Parklife inspired design but realised that we need to ask permission first! So I’ll be sending him message soon and see what he says” said Matt.

Abby explained the origins of the Orior brand and its relevance to the environmental crises we face:

“Our brand name actually means new beginnings in Latin. We thought about what we’re doing in our sustainability and we wanted to start fresh and a new beginning of a sustainable life. And that’s part of our logo. The tree is in the wild and there’s a line under the tree that is going out into the world, like if we don’t carry on planting trees there will be no tomorrow.”