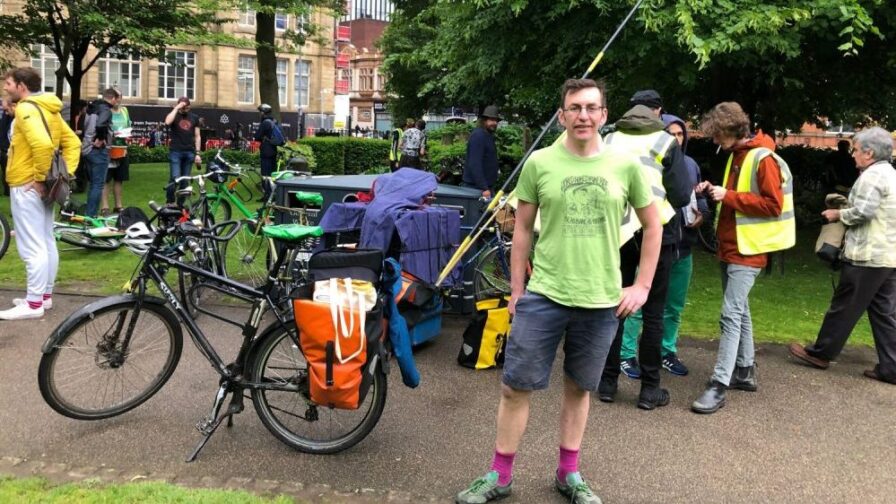 You may have noticed some unusual sights in Manchester city centre last month – and your eyes weren’t deceiving you! There really were hundreds of naked cyclists riding through Manchester city centre on 7th June. It was for the World Naked Bike Ride, an annual event that takes place all over the world. I spoke with organiser Andrew Fisher to find out more:

Could you tell me about the World Naked Bike Ride in Manchester and also the bigger worldwide event?

So this is the Manchester World Naked Bike Ride. This is the 13th year we’ve been going. It happens all over the world and it’s got a few messages. One of them is basically that cyclist needs to be seen. They’re vulnerable and they’re naked; naked when they’re riding a bike even with their clothes on. And why is it that drivers only pay attention to us when we’ve got our clothes off? Why don’t drivers pay attention to us when we’re riding along on a bike any other day?

We’re also anti-car and anti-pollution, we’re saying, look, we need to cut down on fossil fuel use. You’ve seen the message from Extinction Rebellion – we are in a climate emergency and we need to actually do something about that now. We’ve been saying this for years: the bicycle is the answer to that climate emergency. We need to get people on bikes. And the problem we’ve got in Manchester, and everywhere else, is that people want to cycle but it’s too dangerous.

And this is the problem. Everyone says ‘oh, I want to cycle but it’s too dangerous’. And we’ve got lots of money and there’s loads of resources to actually build better infrastructure. But it’s down to the councils who actually say ‘yeah, look, we’re going to prioritize cycling over driving. We’re going to make space for cycling on our roads so that ordinary people can cycle’.

Chris Boardman, who’s Andy Burnham’s walking & cycling commissioner; he wants to make cycle routes around Manchester that a 12-year-old can cycle unaided. If you had a 12-year-old child, I’m sure you wouldn’t let them cycle on the roads as they are at the moment. This is his vision and this is one I completely back. We need to make the roads safe so that even our children can easily use them and get into the habit of cycling rather than using the car for short journeys.”

Ok, so what is it that’s not happening at the council? Has anybody approached them to get this in motion?

Well, Chris Boardman has got a pot of money; and the councils basically need to have the vision and the will to actually do it. If you look to Salford; the council actually put a couple of schemes in. We’ve got one on Chapel Street which is currently underway. But I think the problem with Manchester council is that it’s very much still an old Labour council, it’s quite car-centric. And the feeling is that successful people use cars and we need to cater for them, but that’s not the case. If we look towards what’s happening in London, there’s lots of new cycle highways.

You know cycling has doubled, tripled, quadrupled in the last 5 – 10 years in London, and this is down to making space for cycling, and making cycling a normal activity rather than one that is just done by a small fringe population. Cycling is such a good activity; it is the answer to so many problems. It makes you happier, it gives you time to think, it’s good for you. It burns a lot of fat, you’re less likely to suffer from heart disease and other things. And just overall, it’s fun. And this is the message I want to get across today. The reason I do this is because it is a fun event. You know people enjoy riding their bikes, and they see us and they think “why aren’t I doing that? I want to do that next year. It looks amazing, and it looks fun. Look how much fun they’re having even on a wet Friday night.”

I do think awareness is a big thing because I can’t ride a two-wheel bicycle. I’m going to get a three-wheeler eventually, when I’ve got the money. But I’m quite anxious about cycle parking and cycle routes. What can be done to help anxious cyclists and less common bikes such as three wheelers?

If you’re anxious riding a bike, even a three-wheeler, the problem is that a lot of councils, when they do things for bikes, they all think of a two-wheeler bike. They don’t think of people on three-wheeled bikes. So a lot of parking, and even the cycle barriers aren’t designed for anything apart from a normal bike. So if you’re looking at riding a three-wheeler bike you know you have got those barriers. But the council are slowly putting in Cycle Hubs, but these again probably aren’t designed for anything except the ordinary two-wheeler bike.

And this is one of the things that if you look to other cities like Amsterdam and Copenhagen, a lot of the bikes there are cargo bikes so they’re not all the same size bike. This is what we need to start catering for. So that everybody who wants to ride a bike, and can, has the ability to do so, and is not afraid to ride it. And so that they know they have the security that their bike is going to be there at the end of the day as well.

The other aim of this event is to celebrate people in their body positivity. Like our bikes, we’re all individuals. We all come in all shapes and sizes, and yet people are afraid of their own bodies. And this is the crazy thing – we’re more shocked at the sight of a naked person than the thought of three people being killed in a car crash. We’re like, “oh, it happens every day”. It shouldn’t happen every day. It should be shocking. Why are people dying needlessly when we should be respecting other people on the roads? Why are we shocked at normal people? We don’t all look like supermodels, and we should be proud of our bodies, and proud that we are alive and that we’re human.

I think there’s a lot of people who may be nervous about their own bodies, do you?

Absolutely. Thanks for your time and I hope you enjoy the ride!