By Guest Writer | 2 February 2021Friends of The Meteor 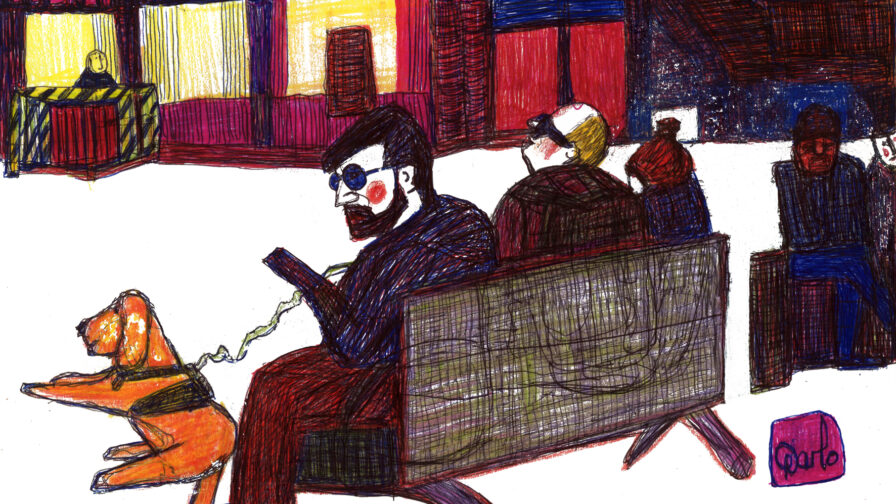 An outsider artist who has experienced periods of homelessness has published a book documenting the pandemic. Elton Darlo, 72, spent the first lockdown sketching street life in Manchester and the series has been turned into a book, Lockdown 2020.

A keen child artist, Darlo never underwent formal training and fell out of the habit of drawing as he grew older.

He went through several stints of homelessness and has struggled with mental health problems over the years. He got back into sketching following the traumatic death of his mother and went on to use art as a form of therapy. Now he is never without his sketchbook and can often be found in the city centre, obsessively sketching in biro.

Darlo said: “I’ve always had an inkling towards art and observation. When the pandemic began, the weather was great so I decided to document the lockdown. I observed and sketched it for people to enjoy. I thought it would be a good thing to do, especially for people who are isolated and on the streets. It was also very therapeutic for me mentally to have something to focus on during this very challenging time. To have it turned into a book is really marvellous.

“I’ve always been very inspired by Vincent Van Gogh – he was a tremendous artist and I love his paintings because I love colour. Beyond his art though, I’m also inspired by his story. He also had his own troubles with mental health. During his lifetime he sold barely any work but his art went on to change hands for millions of pounds.”

Born in Gorton, raised in Longsight and now based in Stockport, Darlo has also lived in London – where he often sketched life on the streets in bustling areas such as Brick Lane.

There, he came to the attention of flamboyant artist and curator Sue Kreitzman, who championed his work and went on to put two of his paintings into a 2010 show of outsider art at Tate Modern.

He was busy capturing the early days of lockdown in his sketchbook one day when an old acquaintance, Nina Ruth, stumbled upon him while out walking with her family.

A sound engineer who had been furloughed, Ruth initially offered to help Darlo with his social media presence. When she saw his lockdown work and realised how much material he had, she suggested turning it into a book. The pair launched a crowdfunder and raised the £1,000 printing costs in under a month. Ten per cent of all sales goes to Manchester Mind, with any other profits being put towards Darlo’s next book, a series of paintings featuring the tributes left in St Ann’s Square for the victims of the Manchester Arena bomb attack.

Of the 43 sketches in Lockdown 2020, some look at issues such as homelessness, mental health and social isolation. One is entitled Big Issue Seller.

Ruth said: “Elton’s work is done almost entirely in biro, which is really unusual, I expect because he often just sketches with whatever he has in his pocket at the time, and the speed at which he captures what’s happening in front of him is also amazing.

“I’ve wanted to help him with his artwork for a while but now I suddenly had a lot of time on my hands in between the home schooling. I took those first images from Elton and set about getting him onto social media, and it went on from there really.

“What I love the most about Elton’s work is the way he just sees things that many others would never notice and how he captures the mood and emotion surrounding the content of the images. He spots real characters of life, but also those that many others would never look at twice. His work is full of empathy, and sometimes display humour and reflect the human condition in this particular moment in history.”

Lockdown 2020 is available from eltondarloartist.com and via Amazon.co.uk

Homeless and vulnerably housed people across the north of England now find themselves without a source of desperately needed income. Big Issue North is doing everything it can to support them through this incredibly difficult time, but they need your help.

You can make a donation to Big Issue North’s hardship fund, providing everything vendors need to survive the weeks ahead, by texting HARDSHIP to 70970 to give £5, going to easydonate.org/HARDSHIP.

To find out more about how you can help Big Issue North and the people they support – click here.