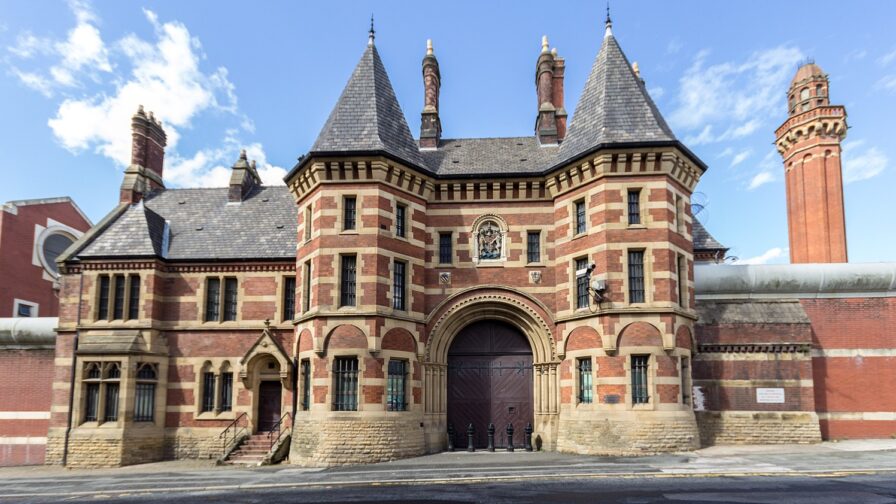 By helping ex-prisoners rebuild their lives and reestablish themselves in society, Manchester charity On The Out aims to break the stigma and reduce the reoffending cycle caused by a lack of support for people after leaving prison.

Hardly a week goes by when we don’t hear how utterly broken the UK’s social service system is. Squeezed by twelve years of brutal austerity, it’s failing to provide adequate care to vulnerable service users who are struggling because of the current cost-of-living crisis.

Ex-prisoners are just some of millions of Brits falling through the cracks, derailed into reoffending as they struggle with past trauma and barriers, shunned by society as outcasts.

On The Out aims to encourage compassion and understanding for people coming out of prison and striving to be better. Focusing on offering second chances, the charity doesn’t judge people for their past actions. Instead, it provides support on release, which includes practical help navigating things like housing, employment, benefits, applying for IDs and bank accounts, and emotional support for improving mental health.

The Meteor spoke to Helen Brown, CEO of On The Out. Helen decided to set up the charity after working in Strangeways prison in Cheetham Hill and witnessing the same recurring injustices.

“It quickly became apparent that it was the same faces just coming in and out and in and out, ” Helen says. “And each time people got out of prison, they didn’t have anywhere to live. Too much was happening on the first day of being released, almost just like falling before they could even start.”

Prison leavers are hindered by numerous obstacles like “not being able to get a bank account or not having ID”, Helen says, which usually mounts into a huge barrier preventing people from rejoining their community.

“It would feel almost impossible for them to get through the first day. Things felt really overwhelming for them, and something would happen, and then they’d be returned to custody and obviously not having accommodation was a huge part of that.”

Breaking the vicious cycle of reoffending

Manchester is infamous for struggling with high rates of homelessness, with the grim statistic of one in every 81 people in the city being homeless. And when ex-prisoners without stable accommodation are approximately 50 per cent more likely to break the law again, as found in the HM Prison and Probation Service Greater Manchester report, providing people with access to safe accommodation is a necessary step in breaking the cycle of reoffending.

“We were chosen as a support provider for Manchester and Bolton, which is a huge number of beds. So now, when people get out, instead of being homeless they’re picked up by the CAS so they can go into the accommodation for twelve weeks, in which time we all work to try and get them somewhere to move on to.”

In addition to offering contacts and advice, the charity puts its words into action by employing ex-prisoners as staff. Helen credits this as the main reason why On The Out “has been so successful in engaging with really difficult and complex people.”

“I’ve worked in homelessness all around the block as a social worker and teacher”, she says. “But I cannot connect to people an inch of what these guys can. And that’s because they’ve got the credibility.

“People look to them, and they know they’ve been through it. They know they understand it. They’re not just another professional reading out of a book, however well-meaning they are.

“For people to be met by somebody who truly understands them so they don’t have to explain themselves is gold dust.”

‘I’ve seen too many fall straight out of the gate‘

George is one of On The Out’s incredible staff who’s been heavily involved with the CAS accommodation scheme. After growing up surrounded by a life of crime, he has channelled his experiences into helping people who have gone through similar hardships get back on their feet. He told the Meteor:

“There’s not really a lot going on in jail, especially now with Covid. There’s no real rehabilitation compared to what there used to be, which wasn’t great. But now there’s nothing, you’re just getting locked up. So it’s pointless for lads, especially with the addiction, when they’re not being picked up because there’s no proper follow-up. The rehabilitation side just isn’t happening.”

Discussing the severity of drug addiction, George says someone caught using Class B substances can face a “small five-year sentence”. Offenders sentenced to two or more years will usually serve half of their sentence in prison and the rest of it in the community on licence, meaning they must stick to certain conditions and they will be under police supervision, he says. If the conditions they are subjected to are breached, they can be recalled to prison.

However, without proper guidance many serving sentences on licence will reoffend, George says. “I’ve seen too many people fall straight out of the gate” because of a lack of communication and support.

“That’s where we try and pick up and bridge that gap by linking them to the right support places before they end up going back off the rails again. Rather than being told their next appointment or point of contact will be available in three weeks or something, we try and get them the help they need from the gate.”

‘No help in prison whatsoever‘

Given England and Wales have some of the highest imprisonment rates in western Europe, On The Out recognises the need for better and quicker access to resources to prevent ex-prisoners from repeating the same mistakes.

While practical things like guiding people through complicated processes for bank accounts and IDs are necessary, the need for professional mental health and emotional support is “often overlooked”, says Helen, but vital.

Chris, another On The Out worker who had been incarcerated in the 1990s, told The Meteor that “there was absolutely no help in prison whatsoever” regarding mental health treatment. Many prisoners resorted to self-medicating by “dabbling in drugs” to cope with anxiety, trauma and isolation.

Time in prison “really does affect your mental health,” George says. Yet despite the glaring mental health issues decades after Chris’s experience, “support on that side is still lacking.”

According to the Prison Reform Trust, 26% of women and 16% of men said they had received treatment for a mental health problem in the year before custody. Meanwhile the Prisons and Probation Ombudsman (PPO) found that 40% of prisons inspected in 2016–17 had inadequate or no training for prison officers to know when to refer a person for mental health support.

The report also found that reoffending rates in the UK were lower for people with a community sentence subject to mental health treatment requirements than those who receive no mental health support after being released.

The stark disparities between the UK nations and other European countries speaks to the need for major system reform, Chris says.

“I think it should start all over again. When I was inside, I met many lads who had been through the care system, and it opened my eyes. A lot of them were struggling with addiction or abuse, so they turned into career criminals and jail was their respite.” Helen added:

“When you look at some European countries, it’s all about helping them move on. It’s not about punishment or vengeance.”

In 2019, the European Committee for the Prevention of Torture (CPT) released a report stating the UK prison system was “overcrowded” and in a “deep crisis”. Levels of violence had increased and people suffering from severe mental health disorders were not being treated in an appropriate hospital environment.

Speaking on the poor living conditions and treatment, Helen continues:

“Prison can re-traumatise people. If you’ve got people in care when they were young, they’re already traumatised. And then you go to prison, and it’s just like, ‘how much lower can you make me feel?’ It’s dehumanising.”

Instead of taking a ‘one size fits all’ approach to rehabilitation, deputy governor of Norgerhaven prison, Jan Roelof van der Spoel stated the Dutch prison system “looks at the individual”, focusing on the cause of the issue rather than the symptom.

“If somebody has a drug problem, we treat their addiction, if they are aggressive we provide anger management, if they have got money problems we give them debt counselling.”

On The Out takes a similarly compassionate approach to helping ex-prisoners not spiral back into re-offending, emphasising that it’s crucial for people to know they’re not judged in any way.

“We try to help people through all the barriers by tapping into what they were like before everything went wrong. It’s just trying to look at the goodness in people and nurture that,” says Helen.

But to tackle the UK’s high reoffending rates, the country can’t solely rely on non-profit charities like On The Out. It’s integral that the government enacts a reform of the prison system to protect society.

“All the talking in the world won’t make a change,” says Helen. “We need action.”

Featured image:  On The Out.