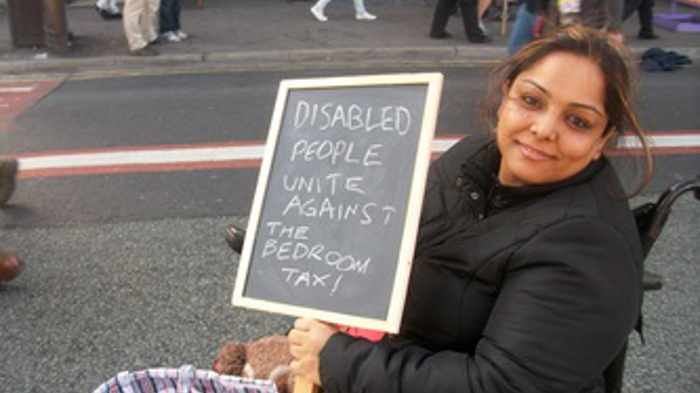 Manjeet Kaur’s life is a story of extraordinary adversity and battles. She fought tirelessly and her work led to changes in policy and practice in several key areas. Manjeet Kaur died on Saturday 25 April 2020 in Manchester, aged 41 years.

Human rights campaigner and activist Manjeet Kaur was born in Afghanistan in January 1979. She contracted polio as a child which meant that she had to use a wheelchair for most of her life. Her father, a doctor, told her that her disability should never prevent her from doing anything and that she should have the same opportunities and experiences as everybody else. Manjeet took this with her for the rest of her life.

Manjeet’s family were Sikhs, and as such were one of the many groups persecuted by the Taliban. In the early 2000s the family fled to India for their own safety, and there Manjeet met and married Amitt Bhatt, a campaigning journalist and Panun Kashmir activist. As a freelance journalist, he wrote articles for a Delhi newspaper which were very critical of the Indian government’s policies in Kashmir.  Manjeet helped research and proof-read his books, Lies and Genocide of the Indian Government (2011) and Cryashmir (2009).

In February 2011, following the murder of his colleague, Amitt disappeared and Manjeet was subjected to physical attacks, and threats of rape and death, by men looking for her husband. Once again Manjeet was forced to flee her home in fear of her life. In March 2011 she came to the UK, having some family in London, and claimed asylum. The authorities housed her in Manchester, despite her not having any connections or contacts there. Although alone, traumatised, facing serious barriers to starting a new life in the UK, and having to cope with a considerable disability, Manjeet set about building a network of support and campaign to help herself and others.

RAPAR helped me to rise and shine again in life, encouraged me to meet people and become involved in campaigns such as disabled people against cuts, access to legal aid and many more activities I have been involved.

It’s good for me emotionally and physically to be active and be part of the society. I feel I am recognised as a human and have the right to live.”

Just over two months after coming to the UK. Manjeet contacted RAPAR, the award-winning Manchester based human rights organisation. Founded in 2001, RAPAR works with displaced people, facilitating them to campaign for themselves and participate in action research. Manjeet became an active and highly respected member of RAPAR and the disability rights community, running a high-profile campaign to support her case for remaining in the UK, and playing a critical role in collaborating with others also at risk of human rights violations. She was Chair of RAPAR from 2014- 2019, and represented the organisation at conferences and on public platforms. When the then Home Secretary Theresa May announced her “hostile environment” policy, Manjeet publicly called out its brutal inequities, when she articulated this, with typical foresight and political acumen, on ITN news, in 2013.

I’m incredibly saddened to learn of the passing of my constituent Manjeet Kaur. Myself and the amazing staff at RAPAR had been supporting Manjeet as she navigated the hostile environment of the UK immigration system.

She overcame so many obstacles and will be dearly missed.

In Manjeet’s work with RAPAR she won two significant battles in her own case which had wider benefits for other asylum seekers. The first was a long campaign in which she challenged the cruel policy which forced disabled people to physically sign on at a Home Office Reporting Centre each week. This in itself is a terrifying ordeal as once inside the Centre people never know if they will be let out to go back home or be sent on to a Detention Centre. In Manjeet’s case the journey involved four buses, in a wheelchair, in all weathers.

Eventually she won the right to ‘sign on’ by phone, thereby setting a precedent for other disabled asylum seekers. Manjeet also faced a number of threats of eviction onto the streets by the Home Office. In 2011, she ran a brilliant campaign of support across a range of organisations including the media, highlighting the Government’s eviction policies. Eventually she won the right to remain in her asylum-supported accommodation, and, following critical media stories, the entire block of flats where she lived was redecorated and refurbished.

The first time I met Manjeet was at a national anti-bedroom tax conference in London. She had come down with campaign groups from the Greater Manchester area which were notably led by disabled women.

Her quiet strength, her resolute, kind spirit and her sparkle were immediately apparent. She leaves behind an enormous hole in the fight for social justice and in our hearts.

As well as being a fierce campaigner – Manjeet had a great sense of humour, and could laugh at the incompetence of the decisions she was fighting, as well as the injustice. In one particularly farcical situation in 2014, Manjeet was again facing eviction onto the streets. The Home Office sent a car to take her to the Asylum and Immigration Tribunal, where a large group of supporters was awaiting her arrival. However the official Government car sent to  take her to the hearing, in which her disability was a key component, was not adapted for wheelchair use. Manjeet could not attend, and again, she won the case against her eviction.

Manjeet’s tireless campaigning saw her joining forces with trade unions; speaking out against the Bedroom Tax and cuts to Legal Aid, and against the far right. She contributed to a mural showing the experiences of disabled asylum seekers which was displayed all over the country, and she also featured in the film: I’m An Asylum Seeker, It Changes Everything (UK Disabled People’s Council)

Manjeet’s daughter, Naysa was born in November 2015, and despite her own very real health problems, Manjeet continued to fight whilst also bringing up her young daughter as a single mother

Manjeet had a warm and generous spirit and a great gift for friendship, as the scores of messages from people she knew and worked with around the UK testify. Despite her own difficulties, she never lost her energetic love of life and her wonderful sense of humour.  When her daughter started nursery, Manjeet made friends in yet another sphere and, for a while, volunteered for the charity MIND.

She leaves Naysa, her daughter, extended family, friends, and the RAPAR community.

By the RAPAR team