By Guest Writer | 18 January 2018Friends of The Meteor 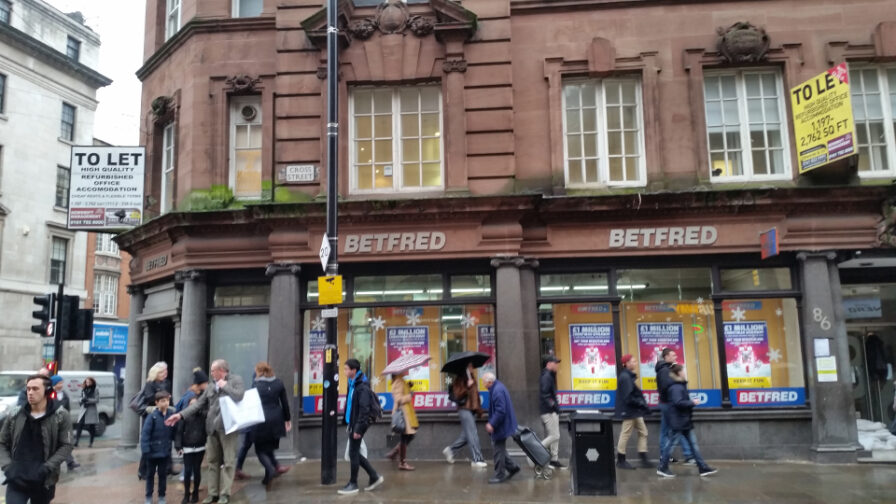 Monday’s early morning eviction of a squat above the BefFred shop opposite Manchester Town Hall has been roundly condemned by housing campaigners, as 17 homeless people were put back on the streets.

Greater Manchester Housing Action stated “shame on whoever it was that made the decision to evict”; while Angela Barratt, of Salford Manchester Street Support, who was volunteering at the squat’s night shelter as the eviction happened, told the Salford Star that “There was just no compassion…”

In December, a squat opened up right opposite Manchester Town Hall and above a BetFred shop, as homelessness activists organised as a D.I.Y. night shelter and ‘pirate ship’ to help the city’s homeless (see previous Salford Star article – click here).

As well as being a ‘home’ for around ten homeless people, the squat, known as Corner House 2 [for previous Meteor report on Cornerhouse 1 – click here], also opened its doors at night for a well organised night shelter to take those off the streets during one of the coldest periods of the year.

The squat gained massive public support, and donations of food and equipment poured in over the festive period, while volunteers gave their time to help with its running. Yesterday morning at 4am, bailiffs, backed up by Greater Manchester Police stormed the building, evicting 17 people who were asleep plus two volunteers.

Eye witness, Angela Barratt, of Salford Manchester Street Support, was volunteering overnight at the squat and tells how people were thrown out before they could gather their belongings…

“There was just no compassion” she says “I was trying to keep everyone calm but there were a few of the bailiffs and coppers who basically wanted trouble, pushing people around.

“Everyone was bewildered as they were asleep and peaceful; that’s why we were there to keep them safe” she adds “They were doing no harm in the building, it was kept immaculate by all of them. Fair enough, it’s someone else’s property but they should be more compassionate.”

“All these individuals have now been made homeless again, down to the actions of the police and bailiffs” stated the group “Since opening, the squat has been providing an efficient shelter service – opening at 10pm and closing the following morning at 10am. It provided beds, hot food and support to people who were sleeping rough. With support from a number of support services, and a large network of volunteers, the squatters were also doing nightly outreach patrols round the city centre, checking in on people sleeping rough.

“In the absence of the Council being able to provide meaningful and dignified night shelters for rough sleepers – let alone deal with the root causes of the problem – these squatters took matters into their own hands” the statement added “In the face of a worsening homelessness crisis, they shouldn’t have been evicted – especially on one of the wettest nights of the year.

“Full solidarity from GMHA to the squatters, and shame on whoever it was that made the decision to evict” it concluded “Empty buildings should be repurposed for housing needs now!”

When squat organisers went back to the building yesterday to reclaim possessions they were refused but after emergency appeals on social media yesterday, more donations have been given.

The Salford Star understands that a new building in Manchester city centre has now been occupied, as temperatures drop and the homeless still find themselves on the streets.

First published in the Salford Star on the 16 January 2016